'Stagecraft'. For the exhibition the artist presents photograms and the band of sculptural negatives built to produce them, Karapetian's latest series challenges the stability of the photographic image through analogy with staged musical performance and sound. 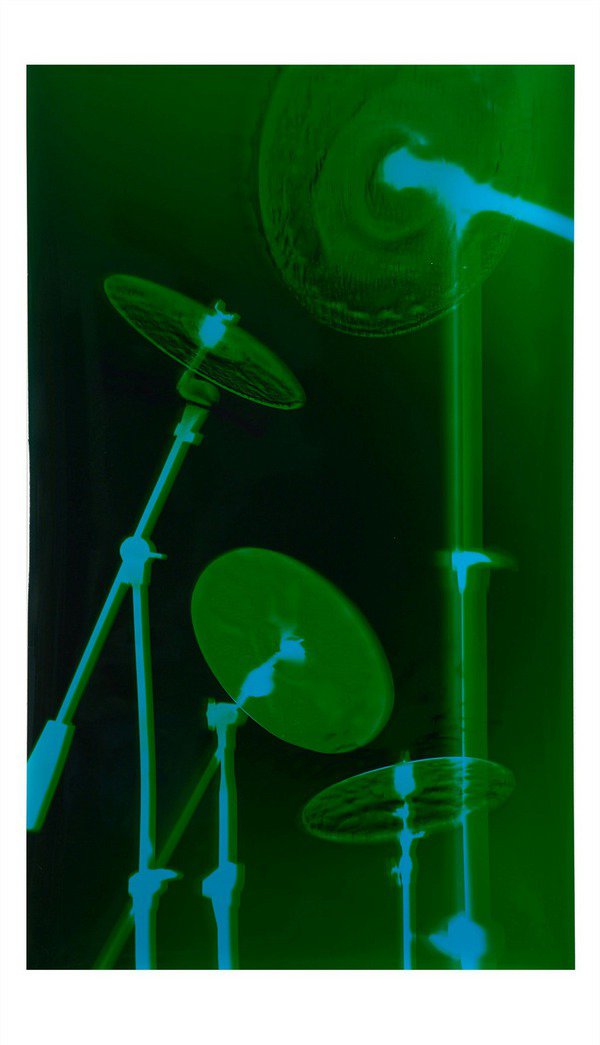 Von Lintel Gallery is pleased to announce Stagecraft, an exhibition of new works by Farrah Karapetian. This will be the artist’s first solo show with the gallery. Comprised of photograms and the band of sculptural negatives built to produce them, Karapetian’s latest series challenges the stability of the photographic image through analogy with staged musical performance and sound.

In this body of work, Karapetian isolates and escalates her investigation of the abstract potential of photography. Just as the production elements of stagecraft underwrite the illusion of theater, photography is the result of multiple acts of fabrication. The photogram can deconstruct photography into its constituent parts - object, photographic paper, light source - but how then an artist pushes these parts defines the artist's concerns. The object in Karapetian’s practice is often a “constructed negative” – transparent in either material (cymbals cast in glass) or form (the armature of a drum kit) – fabricated by the artist and exhibited as sculpture, challenging the notion that a negative is merely a means to an end.

The title of the exhibition also points to the parallels between stage performance and the performative nature of Karapetian’s methods: subjects are invited into the darkroom to reenact postures of music-making and works are installed to interplay in real space as might the components of a band, highlighting the ability of a photograph to both describe and occupy space. Usually the photogram makes a very flat space, a silhouette against a field of color, but Karapetian is interested here in persuading movement and volume from the picture plane. In this setting, the rhythms of object and shadow on paper translate into wavelengths of musical sound; reflection easily interpreted as reverberation. Description aside, much like attending a concert, experiencing Karapetian’s work is best done live.

Karapetian was born in Marin, CA, in 1978. She received a BA from Yale and an MFA from the University of California Los Angeles. Recent exhibitions include the Armory Center for the Arts in Pasadena, CA; the Torrance Art Museum in Torrance, CA; the UCR/California Museum of Photography in Riverside, CA; the Orange County Museum of Art; and the Vincent Price Art Museum in Monterey Park, CA. Recent grants include the California Community Foundation Mid-Career Artist Fellowship and the Artswriters grant from the Warhol Foundation | Creative Capital. Her work is included in the collection of the San Francisco Museum of Modern Art. She lives and works in Los Angeles.