An exhibition of work by a diverse group of twenty-two established and emerging California artists. Initiated and sponsored by the Fellows of Contemporary Art, Los Angeles, the exhibition is curated by Karen Moss, San Francisco Art Institute Director of Exhibitions and Public Programs, and recipient of the Fellows curators award for 2004. 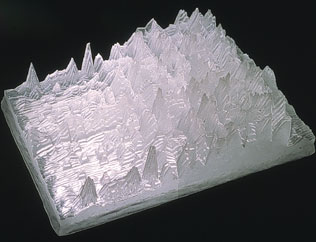 The San Francisco Art Institute Walter and McBean Galleries is proud to announce Topographies, an exhibition of work by a diverse group of twenty-two established and emerging California artists. Initiated and sponsored by the Fellows of Contemporary Art, Los Angeles, the exhibition is curated by Karen Moss, San Francisco Art Institute Director of Exhibitions and Public Programs, and recipient of the Fellows curators award for 2004.

Topographies features representations that reference terrains ranging from the rural to the aural to the wholly imaginary. Sharing an interest in strategies of mapping, marking, and delineating specific sites, the artists of Topographies employ a wide range of artistic forms to highly individualized ends, including photography, drawing, painting, sculpture, installation, public intervention, video, and site specific work.

The exhibition will be on view at the Walter and McBean Galleries March 19-May 8, 2004, with a reception preview, Friday, March 19, 5:30-7:30 pm, and will then travel to the Pasadena Museum of California Art, where it will be on view July 16-September 26, 2004.
Public lectures at the San Francisco Art Institute during April and May include a Wednesday, April 14 lecture by Ingrid Calame and a Wednesday, April 28 lecture by Jessica Bronson.

No longer confined to the domain of cartographers and geographers, the topographic pervades diverse disciplines ranging from art and architecture to medicine and metallurgy, and to myriad areas of science and technology. But no matter what the discipline or technology, the topographic most often resides in the realm of visual: making that which is initially invisible, or intangible, visible.

The exhibition opens with work by John Baldessari, Allan Kaprow, and Ed Ruscha, three artists active in conceptual practices since the 1960s. These works serve as an historical frame for the strategies used by the other artists in the exhibition. Whether using abstract, representational or mediated forms, they produce work that emanates from particular conceptual systems or vantage points, each mapping a terrain, locale, or space, often transforming and re-contextualizing the subject. While some do make maps, they question their veracity or objectivity and often subvert traditional cartographic systems. Other artists are more interested in the processes or procedures of mapping, marking or tracing an existing site, experiencing or sensing place, or rendering space. And still others are engaged in re-mapping to create new territories.

Several artists examine the relationship between the natural world and our attempts to understand its various topographies. John Baldessari made his own mark on the land in his California Project, Part 1: California, 1969. In this project he attempted to impose language on nature by executing each letter of the word â€œCaliforniaâ€ as it appears on a National Geographic map in its exact location in the landscape. Other works that map and mark nature itself include Bull.Miletic's (SFAI alumni) video mediation of Racetrack Lakebed in Death Valley in You Are Here; Young Kim's bi-furcated panels of ambiguous sky/sea-scapes; John Roloff's (SFAI Faculty) site-specific Geology Flags; Susan Silton's video of the horizon at different sites around Los Angeles; and Anna Von Merten's conceptual paintings and quilt maps.

Some artists trace lives and experiences in urban space. Allan Kaprow has used the urban environment and city streets in both his classic Happenings and later events for more than forty years. In his 1969 event Dial, at the San Francisco Art Institute, participants traced the shadows cast by telephone poles from Columbus Avenue in North Beach up to the school at the foot of Russian Hill, marking time and territory as a social interaction within the anonymous, urban environment. Ten years ago Charles La Belle began to search for and document abandoned sofas within a one-mile radius of his Hollywood home. The result, Abandoned Couches, 1992-2002, documents the sofas and maps their locations. Other works that chart the cityscape include Ingrid Calame's intricate tracings of sidewalk marks re-composed as paintings on aluminum, and a collaborative project by the San Francisco Bureau of Urban Secrets, a group of artists, architects, and urban planners led by Jeannene Przyblyski (SFAI faculty).

Geopolitical and linguistic terrains are examined in Charbel Ackermann's (SFAI alumnus) New Geometry, a series of watercolors and axioms based on deconstructions of the new geopolitical term, â€œAxis of Evilâ€, and in Jessica Bronson's site-specific installation perpetual/perceptual, in which green, blue, yellow, orange, and red light stick monitors constantly flash the corresponding words â€œlow, guarded, elevated, high, and severe,â€ based not on natural events, but on the unnatural, â€œthreat conditionâ€ of the post-9/11 era.

David Hinman, Alex Slade, and Rigo 23 map intangible and often unnoticed human interactions through striking visual representations. Alex Slade's The Conversation, 2004, charts the social environment of people conversing in a Thai restaurant in both photograph and sculpture. Rigo 23's (SFAI alumnus) mural on an exterior wall of the San Francisco Art Institute, executed in collaboration with SFAI students, addresses the specific site, community, and social topography of the campus. David Hinman's sculptural work based on the ebb and flow of sound and silence during the one-year memorial ceremony for the 9/11 disaster is shaped through a computer plotted graphic made from the recording, translated as a lead object.

The 88-page, full color exhibition catalogue, designed in the style of a Thomas guide map book, includes four essays and documentation of the artists and their work in drawings, maps and other text.