Ernie Gehr with 8 video installations surveying his most recent works; a site specific project of over 300 one-meter-long poles of metals by Raphael Hefti; a series of works questioning the notion of time by Alfredo Aceto. 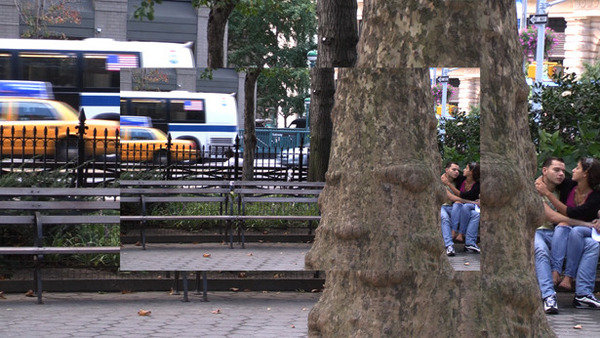 From January 29, the Centre d’Art Contemporain Genève will present two major solo exhibitions: the first ever exhibition of American experimental director Ernie Gehr’s video installations in an art institution and one of the most significant exhibitions ever held by Swiss artist Raphael Hefti.

Described by the New York Times as “one of the most penetrating and influential avant-garde filmmakers working today,” Ernie Gehr will present eight video installations surveying his most recent works on the third floor of the Centre. None of the pieces presented in Bon Voyage have previously been shown in Europe and five of them are shown as world premières in Geneva.

The exhibition will be accompanied by an extensive catalogue published by Mousse Publishing. It will include a complete chronology of the cineast’s work and life as well as newly commissioned contributions by Andrea Bellini, Ken Eisenstein, John Hanhardt, and “Bon voyage,” a visual essay by the artist.

Born in 1941 in Milwaukee (USA), Ernie Gehr is a filmmaker closely associated with the Structural film movement of the ’70s. His most important works include Serene Velocity (1970) and Side/Walk/Shuttle (1991).

Raphael Hefti: OR OR OR?

In his work, Raphael Hefti—who was trained as an engineer—investigates the properties of the materials and processes associated with industry. With an interventionist approach, the artist conducts experiments that challenge the mechanisms of industrial production and eventually divert or reveal the beauty of everyday material.

For his solo exhibition at the Centre, Swiss artist Raphael Hefti will present OR OR OR?, his first ever site specific project. The installation made for this exhibition consists of over 300 one-meter-long poles of steel, aluminium, titanium and copper. Some of the poles have been heated electrically to various extremely high temperatures, a process which transformed the coloration of the metals, lending them an alien appearance. During the opening of the show, he will create an installation in front of the public, turning the space into a laboratory for production and experimentation.

Raphael Hefti was born in 1978 in Biel (Switzerland) and lives and works between Zurich and London. He attended the Ecole Cantonale d’art de Lausanne (ECAL) and the Slade School of Fine Art, London.

At the Project Space on the fourth floor of the Institution, artist-in-residence Alfredo Aceto will show a first series of works questioning the notion of time.

Alfredo Aceto was born in 1991 in Turin. He graduated in 2013 from the Ecole Cantonale d’art de Lausanne (ECAL), and will be the first of the three 2015 artists in residence at the Centre d’Art Contemporain Genève. He will be followed by Maya Rochat (b. 1984, Switzerland) and Julie Sas (b. 1991, France) later in the year.