The exhibition proposes both in its form and its temporality, to experiment, in actual practice, the operating mode of display as a structure and as a possibility for encounter in the public institution at the beginning of the 21st century. 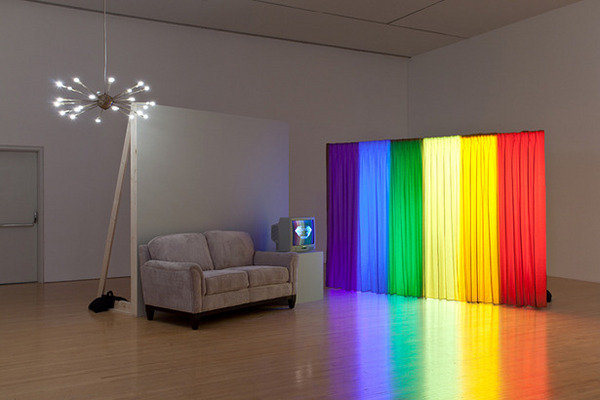 RIDEAUX/ blinds designed and organised by Marie de Brugerolle following an invitation by Nathalie Ergino on behalf of the IAC, is a shifting, sliding proposition.
The exhibition proposes both in its form and its temporality, to experiment, in actual practice, the operating mode of display as a structure and as a possibility for encounter in the public institution at the beginning of the 21st century.

RIDEAUX/ blinds questions the legacy of modernism, of abstraction and of the monochrome, ownership of what remains, the film of images in an awareness of the means of mechanical reproduction; painting with photography, film and screens. The idea is to experience what we are going through, that which grips us, the commodities of our conversations, the sensitive surfaces and false holes, the reciprocity of light...

« RIDEAUX/ blinds organizes the space into a path wherein the works of art become structural links. They limit and create the space, they dialogue with the walls, and the holes in the walls. Perhaps the idea is to turn the space inside out, like a glove, and enter through the back of the painting, from behind the fence, from the other side of the canvas. Perhaps, like Orpheus glancing backwards a second time, seizing a second chance, one of “déjà vu”, the visitor will pay closer attention: heightening their awareness and becoming an informed viewer. Then, amused, they may double back on their tracks and take off on new tangents.

If video walls, moving panels, sliding doors and other reflecting surfaces populate our modernity, how can they be measured in relation to the watching, moving body? More particularly, what does this tell us of a vision that slips and catches, of our reflections captured despite ourselves, of time caught in the pixelated net of “screen time”?
What makes up the beginning of what we call a decor? How can we pass from the intimate, the domestic, the neutral, to the extraordinary? What is the “screen” that shields and blinds us?

The title plays with words, making weapons of them, so as to situate the experience of the liminal and laminated threshold, of a footstep suspended and extended, neither before nor after, but precisely in the here and now of a passage that can overtake itself, splitting and shedding, not in speech, but in action.

The project unfolds over three temporalities and a rehearsal. The exhibition invites the visitor to go beyond certain limits and engage with the experience of desiring to see. There is nothing to see and I will show it all to you. In constant dialogue with the surfaces and the walls, the ceilings and the floors, the works of art are clues leading to a discovery: an epiphany of the real.
In other words, there is no truth revealed by the artistic act but, if we so wish, the selfsame act can lead us to a different perception of the real. The epiphany is the act of looking, the objet d’art is an agent provocateur, the viewer in turn becomes a screen. We are the curtain.»