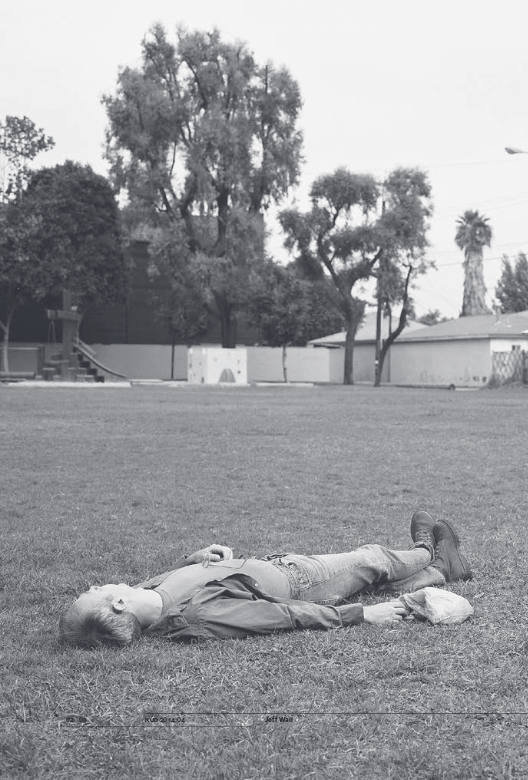 With Jeff Wall, Kunsthaus Bregenz in cooperation with the Stedelijk Museum in Amsterdam and the Louisiana Museum of Modern Art in Humlebæk is presenting one of the most innovative artists of his generation.

He has been involved in photography since the late 1960s and began presenting large-scale images as early as 1976, frequently in the form of transparencies in light boxes. He describes his work as "cinematographic"; making use of approaches normally identified with film-making for the creation of photographs. He has often expressed his admiration for the way filmmakers are able to combine different stylistic approaches in a single film, explore different levels of artifice and technical complexity, work with performers, and play with photography's documentary capacity.

His photographs contest the traditional aesthetics of photography, whilst simultaneously compressing multilayered narratives into impressive pictures or "tableaux." His subject matter ranges from contemporary social issues to the high artifice of imaginary worlds. He draws inspiration from painting, photography, literature, and film. Many of his images are based on events the artist has experienced or observed, subsequently reconstructing them for the camera.

Wall was an early adopter of digital technology, employing it since the beginning of the 1990s to construct many of his images. The apparent unity of the pictures is in fact the result of a complex assembly of different shots. He uses this process not just for fantasy scenes like The Flooded Grave but also for many apparent snapshots.

The exhibition in Bregenz is the first comprehensive presentation of his work in Austria for over ten years.

A catalogue is published on the occasion of the exhibition with essays by Camiel van Winkel, Hripsimé Visser, and a conversation between Yilmaz Dziewior and Jeff Wall.

Participation forms the basis of Hannah Weinberger's artistic activity. She exploits music and space in collective performances which provide viewers with a performative role. One of the most exciting artists emerging from a young, Swiss generation, Weinberger's installations charter new grounds in collaborative art production.

Using primarily audio elements, Weinberger's exhibition will transform the KUB Arena into an audio workshop—a flexible space where visitors are invited to determine the direction and form of the project. As Weinberger says, "I like the moment when one doesn't know where something is leading, or what the result will be."

The KUB Arena will become a playground where visitors are invited to shape the exhibition together with the artist. In lieu of a static exhibition Hannah Weinberger has conceived her exhibition at KUB Arena as an ongoing event. Artists, musicians and others will be invited to visit Bregenz to engage with the installation and the local community.

Part of Weinberger's KUB Arena exhibition will take place outside the Kunsthaus Bregenz.
Large, heavy boulders from the Swiss mountains have been carefully transformed by hand into large, resonating speakers. Removed from their original natural environment, these "singing stones" eschew conventional understandings of audio equipment.

Sculpture becomes sound, and sound becomes sculpture. Hannah Weinberger's KUB Arena exhibition is the first large-scale presentation of her unique artistic practice in Austria, a project that has been especially tailored for Kunsthaus Bregenz.