For the exhibition Jiang Zhi presents a series of photographs where the burning flowers are not only the subjects, but also the light source. Shi Qing's work is created within a framework which enables him to identify a series of interconnected subjects, ranging from Socialist architecture. 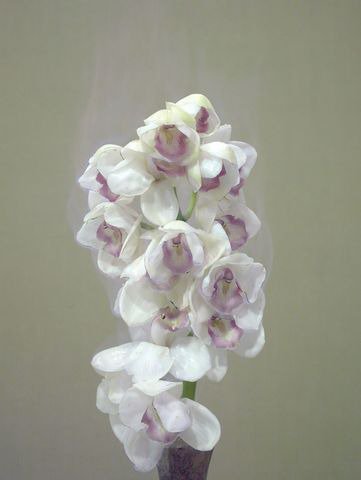 Jiang Zhi’s practice includes photography, video, installation and painting, as well as documentary film and text, reflecting on philosophical questions about what constitutes ‘reality’ or ‘truth’. Following his early focus on specific cultural and political topics, Jiang Zhi’s more recent work addresses wider issues concerning ideas about the temporality and materiality of objects, as well as the broader socio-political context in which the art is made and interpreted.

The exhibition title ‘The Sight’, refers to the act of seeing and the passage of time, and hints at the artist’s understanding of the illusory and mutable nature of the world around him. In his series of photographs titled Love Letters, Jiang Zhi explores the visual and temporal themes of photography itself, as well as the mechanism by which the image comes into being. The burning flowers are not only the subjects, but also the light source by which the image is captured. In works such as the The Gift or 0.7% Salt, the videos do not yield a narrative structure but rather record a period of time.

Jiang Zhi does not set out to dictate the means of production of his works, allowing the elements of controlled chance to inform the final result. This is explored further in his silk-screen paintings where the colours on the front of the canvas are a register of an action, whereby the artist has used the reverse of the canvas as a silkscreen surface. This results in the colour seeping through to the front, somewhat mirroring the process of photography, so that the image is achieved through reversal.

From Shi Qing’s early interest in the subconscious, as manifest in legends and fairytales, he has developed a symbolic and ritualistic style in order to resist what he sees as the ‘vulgarisation of sociological questions’ and ‘the poverty of experience within current conceptual art practice’. Shi Qing increasingly turns towards experimentation as the means of production, as well as research into the issues surrounding the creation of social spaces. He has developed a modus operandi whereby each exhibition is treated as a site-specific project, determined by a new set of conditions. This approach allows the artist to resist any political and aesthetic dictates that he feels are frequently imposed by a contemporary globalized art system.

Shi Qing’s work is created within a framework which enables him to identify a series of interconnected subjects, ranging from Socialist architecture and environments, geology, botany, weather patterns to art and its communities. The work often brings together pre-fabricated objects such as wooden cubes, cardboard boxes, Styrofoam, plaster, metal structures and potted plants. These objects do not function as vessels for particular material aesthetics, but, at most, serving as the impetus for ideas. The objects brought together in this exhibition reveal both the constant shifts in Shi Qing’s areas of interest and also the works unifying methodology.