Sara Morris exposes new paintings and film and works on paper. 'So far, so good' is a group show that presents the work of the younger generation, revealing possibilities for dialogue that are unlikely to be seen in another context. 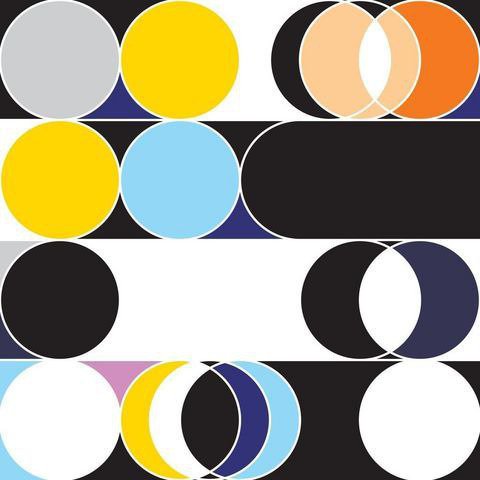 Sarah Morris: Galeria do Rock experience and see the paintings in the same manner: visceral, after-images, interfaces sometimes representing something that is repulsive, overwhelming; a system that is larger than you, with moments of inherent complicitness, and yet distance or failure built in.Sarah Morris

Morris’ work examines the culture and ideology of late capitalism as it effects architecture, urban planning and social bureaucracy, engaging with what writer Bettina Funcke has identified as ‘the hyper-intensity of our time’.* She describes Morris’ paintings and filmmaking, parallel activities within her practice, as a way of investigating, tracing and playing with ‘urban, social and bureaucratic typologies’.

In Morris' new series of paintings she focuses on the city of São Paulo, drawing her inspiration from a wide range of sources such as the city’s urban typology, its modernist buildings, iconic landmarks and unique geographical landscape. Oscar Niemeyer’s architecture, and his influence on Brazil’s visual vocabulary as a whole, as well as the work of Osvaldo Arthur Bratke, Roberto Burle Marx and Lina Bo Bardi, are key starting points, alongside more quotidian references of tropical fruit, street signs and Bossa Nova album covers.

In these abstract paintings, which are all household gloss on canvas, Morris employs doubling, symmetry and compression to build tension within her compositions, using an evocative palette of violet, orange, canary yellow, azure blue and black in forms that repeat, splinter and fall apart. Like her films, the paintings emerge from an amalgamation of diverse influences and have a sense of energy and restless movement, remaining unfixed entities that rely on notions of language, fluidity and play. Circular shapes seem to proliferate, as if open-ended reflections on urban density either contained within horizontal bands of colour or fragmented and bisected, recalling the patterning of lunar charts. In some works, such as Fura-Fila [São Paulo] (2014), Morris refers to specific aspects of the city – in this case, the experimental and controversial monorail, that for many years remained an unfinished, skeletal presence within the city.

Morris’ approach to producing work is systematic yet always open, unresolved, iconic and dynamic. The film Rio (2012) on display at Galeria Fortes Vilaça, retains the same sense of detachment and openness in its surface projections depicting the multifarious layers of this most contradictory of cities, from its highly orchestrated and eroticised surface image to the infinite realities of its vast urban sprawl. The camera seems to wander, flaneur-like, through Rio’s beaches, fruit stands, hospitals, iconic modernist architecture, football stadiums, factories and favelas, capturing scenes such as the office of the late Oscar Niemeyer, the office of the Mayor of Rio, the legendary ‘City of God’ neighbourhood, as well as the inside of the Brahma beer factory. Rio presents a matrix, reflecting on architecture, spectacle, industry, history and the way these forces engineer social interaction and form Brazil's outward identity to the rest of the world. Alternating between the micro and macro, the landscape and the detail, day and night, it creates a hallucinatory, parallel visual space that explores the psychology of this city and traces how this identity is embedded into its colourful visual surfaces.

So far, so good

A scar may not show, but I know it remains within’
João Cabral de Melo Neto (1980)

‘This is the story of a man who is falling from a 50-story building. During the fall he comforts himself by repeating: “So far so good, so far so good, so far... all right.” The important thing is not the fall, it is the landing.’ This anecdote as recounted by a character in Mathieu Kassovitz´s film La Haine (1995), along with reflections on the black boxes carried by aircraft, is the starting point for this exhibition.

The black box is a recording device placed on aircraft that stores data which is only revealed during an investigation following an accident. If the worst happens, the recordings become evidence. Conversely, if the box is not found ˗– as was the case with the disappearance of Malaysian Airlines Flight 370 in March 2014 – the absence of such evidence returns the mystery to us, taking us back to the dark, unknown seas of the great voyages of discovery.

How can an aircraft with more than two hundred passengers disappear at a time when, such is our faith in technology, it is inconceivable that any object can escape surveillance. In this case, political or metaphysical reasons apart, the absence of the black box and thus the tragedy being held in abeyance, makes room for the inexplicable, the poetic, for the mysterious. As when smoke seen rising into the air may be the result of arson or simply from a bonfire celebrating St John´s day, our inability to access and decipher the contents of the black box leaves us suspended in the ‘unstable moment’ which precedes the event.

The data in the black box is continually overwritten during the course of daily take-offs and landings, as if waiting for a single event – so far so good – the moment when everything changes. At that moment we realise our weakness and that very little is needed for the world to collapse around us. What matters is not the fall...

In the movie The Night by Michelangelo Antonioni (1961), we witness the silent deterioration of the relationship between a couple during a party. The environment is one of celebration, nothing happens to trigger an argument but, at dawn, something changes, as if the two see themselves – both themselves and each other – in a different light. If there was a black box monitoring that relationship, the constantly overwritten information could become evidence. It would be possible to detect and register the twilight of their love and perhaps finally answer the fundamental question posed by Georges Perec, ‘What happens when nothing happens?’

The focus of this exhibition is the second before the landing, the sunset, the unfinished. The participating artists treat that moment each in their own way, questioning imminence and the fragility of structures, working from traces and evidence. They are invited to reflect on permanence and disappearance and the discovery or loss of black boxes along the way.

In this exhibition the work of the younger generation is set alongside that of more established artists, revealing possibilities for dialogue that are unlikely to be seen in another context. Participating artists include Daniel Albuqueque, Miroslaw Balka, Bernardo Glogowski, Kris Martin and Rita Vidal.