For the exhibition Fritz Panzer presents a series of small sculptures, as well as several drawings and paintings. Michelangelo Penso presents works inspired from the branch of scientific-biological studies. 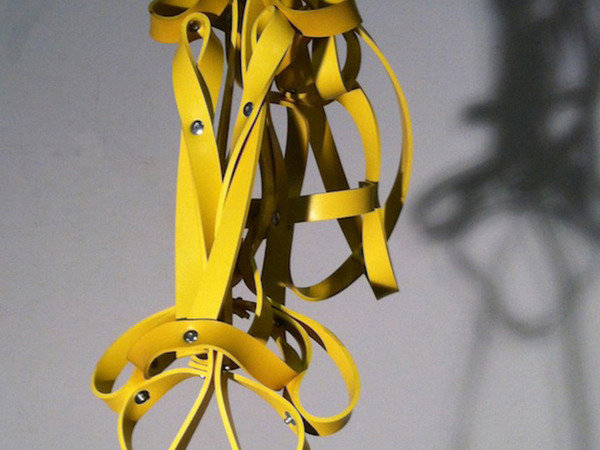 A.P.: What kind of artworks are you going to showcase for your next exhibition here in Paris?

F.P.: I’m thinking about a series of small sculptures, as well as several drawings and paintings.
In your sculptures, paintings and drawings you are inspired by the objects of everyday life… Why?

Objects of everyday life? I ask myself: Isn’t everything of everyday life? I consider my proximate environment also as an extended studio and the present situations, rooms and objects are like models for my work.
Have you always been inspired by the objects?

Yes. Objects also stand for specific situations or characters. For example, at the moment I am working on a sculpture: it’s about three chairs and how they stand around in my studio, everyone of them is different and I have the oldest one since I was a child in Judenburg.
Let’s talk about the materials you use in your sculptures…

The sculptures are three-dimensional drawings. I use iron wire in different sizes to obtain different lines.
The title of the exhibition is: Interligne. What is the relation between the title and your work?

The german translation for “interligne” is “Zwischenraum”, which literally means “space between”. In my drawings not only the lines are essential but also the interstitial you make.
What about your upcoming projects?

Beside my work about the three chairs, which will be part of a group-show in the Secession in Vienna, I am working on a sculpture called “Klavier Integral Nam June Paik”. So in that case the starting point is a piece of art.
What do you expect from your exhibition in Paris?

A.P.: What kind of artworks are you going to showcase for your next exhibition here in Paris?

M.P.: I am working on several artworks adjoining to Fritz Panzer's, in order to share the space of the exhibition in a conceptual way either. I strongly believe our artworks could easily and naturally stand side by side, because we both work on the dimension of volume and emptiness, defining the three-dimensional spaces only through lines and not through plans marking the space: there is an assonance in this kind of research.

My works are always inspired from the branch of scientific-biological studies; indeed, they work on microscopic exoskeletons of bacteria. We all have an internal skeleton while in micro dimension many of these beings have an external skeleton, they are kinda made of cartilage. My artworks draw inspiration from this aspect and they are realized using rubber, so that they are highly deformable themselves, even once accomplished. In nature these exoskeletons can effectively deform themselves in their vital environment, moving, floating in the voids of this micro dimension.
Why is your work often concerning science and images of bacteria, viruses, microorganisms, etc.? Where does this particular interest come from?

When I started to be interested in this dimension of scientific research, I found some very interesting new forms and different incentives, but what I liked most is definitely the idea that something, comparable to a tiny grain, if implemented and defined, will spring a great social and political worldwide revolution. Several years ago, I was conducting, as I still use to do, some researches about genetic circuits, because I really believe that when people will manage to use these little beings in our organisms, our life expectancy will become longer and we will find some medical treatment to incurable diseases. So the great political and social revolution takes place precisely because all of the governments of various nations are wondering about various issues, such as health.

A small invention like this one could really subvert what politicians and bureaucrats are trying to build. Therefore, I see a huge potential, even explosive, in this little research. I want to give an aesthetic to this concept, which could become a big change in the everyday life of every individual, as well as in our social relationships. This is why I think that the art system too, should not miss this opportunity to be part of this dimension because it belongs already to it, according to the abstraction of thought. Even my artworks, beyond the concept that I need or I want to express, could be considered as abstract ones, since I move away from the real’s representation: perhaps this could be a difference with Fritz. I try to represent the unseen to get even more in a dimension of abstract thinking.
The bacterium that, for example, has inspired your new artworks, is not the exact representation of reality, you don't conceive them as giant bacteria.

Indeed, I could make representations according to a complete mimesis, but I think it's pretty limiting, because it forces you to look what the microcosm is but in an enlarged way. So at this point, it would be exactly the same action as to go to a lab and observe through a microscope. Instead, this should be a starting point, this should push people to ask themself why, and finally to find the connection to scientific research, to reach an abstract dimension in that sense. I mean, a researcher's thought is always abstract, mathematics itself is a pure abstraction, and consequently also all these lines defining forms in my artworks, may potentially be considered as mathematical calculations of curves and parabolas. These are issues that I have already dealt with, through the years.
Can you tell us something about the different materials used for your sculptures?

They are directly linked to the environment I am part of, they are always materials linked to the industry. I opt for industrial raw materials because I can easily find them where I work and create, in my studio.
What do you expect from your next exhibition in Paris?

Since our long lasting collaboration among us, I consider this next exhibition as a further step of symbiosis we have always had in experiencing new exhibitions.

Furthermore, I think that collaborating together we have always been able to renovate proposing and interesting ideas. I hope we will manage to do the same this time either.