The exhibition presents recent paintings by the artist. His masterful technique is achieved through the study and emulation of the compositional devices, graphic rhythms, and refined surfaces of sixteenth and seventeenth century Northern European painting. 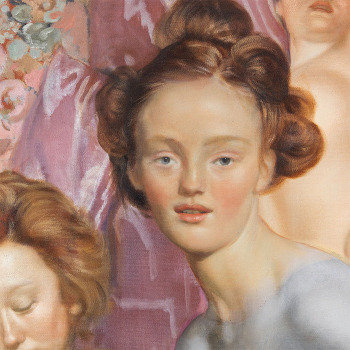 Gagosian Beverly Hills is pleased to present recent paintings by John Currin, his first solo exhibition in the Los Angeles area in more than a decade.

Currin's paintings are at once highly seductive and deeply perplexing. His masterful technique is achieved through the study and emulation of the compositional devices, graphic rhythms, and refined surfaces of sixteenth and seventeenth century Northern European painting. His eroticized subjects exist at odds with the popular dialogue and politics of contemporary art. With inspirations as diverse as Old Master portraits, pin-ups, pornography, and B-movies, Currin paints ideational yet challengingly perverse images of women, from lusty nymphs and dour matrons to more ethereal feminine prototypes. Consistent throughout his oeuvre is his search for the point at which the beautiful and the grotesque hold each other in perfect balance.

In his most recent work, Currin layers each canvas with multiple sex scenes, creating paintings within paintings. To existing works-in-progress, he introduces new figures, interrupting the picture plane with contrasting color, texture, and technical methods. In tondos that allude to Renaissance precedents, nudes fluctuate between vivid focus and hazy distortion. The man and women of The Storm (2013) copulate within a lavish mise-en-scène of unbuttoned silks set against a bleak night sky. In Chateau Meyney (2013), titled after a famous French vineyard, a rosy-cheeked woman with one breast exposed raises her wineglass to the viewer; over her shoulder, an oneiric erotic scene plays out in shades of fiery red. In Tapestry (2010), the baroque treatment of a modern woman is at odds with her attire of torn jeans and peasant-style blouse; her exquisitely sharp, brightly colored figure seems to float within a fluid setting of floral patterns and bodies blurred in sexual ecstasy. Skewing a breadth of classical devices to lascivious ends, Currin continues to explore the libertine fantasies of the id through the prism of art history.