The retrospective features 20 films and numerous shorts capture the breadth of Wenders's career, from his 16mm experimental works of the late 1960s to his most recent nonfiction work, the Academy Award-nominated The Salt of the Earth (2014). 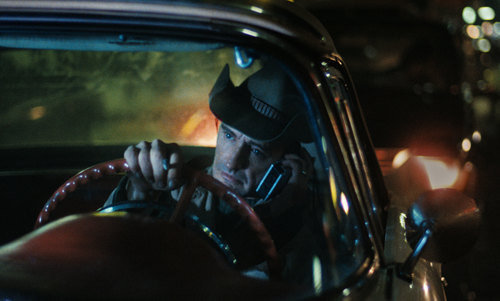 The Museum of Modern Art celebrates Wim Wenders (b. 1945), one of postwar Germany’s most accomplished and influential filmmakers, with a major career retrospective. This exhibition represents a collaboration with the Berlin International Film Festival, which dedicates its 2015 Homage to Wenders, presenting him with an Honorary Golden Bear award for lifetime achievement; and with Deutsche Kinemathek – Museum for Film und Fernsehen.

MoMA’s retrospective of 20 feature films and numerous shorts captures the breadth of Wenders’s career, from his 16mm experimental works of the late 1960s, including Same Player Shoots Again (1967) and Silver City Revisited (1968), to his most recent nonfiction work, The Salt of the Earth (2014), a profile of the Brazilian photographer Sebastião Salgado. Codirected by Juliano Ribeiro Salgado, the documentary won Un Certain Regard Special Prize at the Cannes Film Festival, and will be commercially released by Sony Pictures Classics later this month.

In what essentially amounts to a master class with the filmmaker, Wenders introduces the entire first week of retrospective screenings, and joins his longtime collaborator Peter Handke—the Austrian author who coscripted 3 American LPs (1969), The Goalie’s Anxiety at the Penalty Kick (1971), Wrong Move (1975), and Wings of Desire (1987)—in a conversation moderated by the writer Ian Buruma. Wenders and Handke also present the North American premiere of a new 4K digital restoration of The Left-Handed Woman (1978), which Handke directed from his own novel and Wenders produced.

Also presented are new digital restorations of some of Wenders’s most cherished fiction and nonfiction films: The Goalie’s Anxiety at the Penalty Kick (1971); Alice in the Cities (1974); The American Friend (1977); Paris, Texas (1984); Tokyo-Ga (1985); Notebook on Cities and Clothes (1989); and the North American premiere of Until the End of the World (1991/1994) in its full-length director’s cut. The retrospective culminates with Wenders’s vibrant documentaries about music, dance, and filmmaking: Nick’s Film: Lightning over Water (1980), A Trick of the Light (1996), Buena Vista Social Club (1999), The Soul of a Man (2003), and Pina (2011). All films are directed by Wim Wenders, unless otherwise noted.

Monday, March 2, 2015, 3:45 p.m., Theater 2, T2 (Introduced by Wim Wenders):
Paris, Texas
1984. USA. Directed by Wim Wenders. Screenplay by Sam Shepard, adapted by L. M. Kit Carson. With Harry Dean Stanton, Dean Stockwell, Nastassja Kinski, Hunter Carson. Winner of the 1984 Palme d’Or at Cannes, Paris, Texas is a road movie like no other, a meditation on the American West that is at once mythic and vernacular. The film’s stark, spare dialogue, written by Sam Shepard and L. M. Kit Carson, is perfectly keyed to Ry Cooder’s haunting slide-guitar score and Robby Müller’s cinematography, which recalls the paintings of Edward Hopper and the 1970s New Topographics photography of Robert Adams and Lewis Baltz. Played with a laconic intensity by Harry Dean Stanton, Travis Henderson is one of Shepard’s most poignant creations, the distant stranger trying to make right as he travels across the unforgiving Texas desert, a landscape of dusty gas stations and flickering neon, to reconnect in Los Angeles with a son he hasn’t seen in years (Hunter Carson), and then on to Houston in search of his estranged wife (Kinski). The film culminates in a set of iconic monologues between the erstwhile lovers that take place on either side of a peepshow booth; though separated by a one-way mirror and cheap insulation, they see each other with a despairing clarity. New digital restoration. 148 min.

Monday, March 2, 2015, 7:15 p.m., Theater 1, T1 (Introduction and post-screening discussion with Wim Wenders)
The American Friend
1977. West Germany/France. Directed by Wim Wenders. Screenplay by Wim Wenders, based on the novel Ripley’s Game by Patricia Highsmith. With Dennis Hopper, Bruno Ganz, Samuel Fuller, Lisa Kreuzer, Nicholas Ray, Gérard Blain, Lou Castel. The misanthropic thrillers of Patricia Highsmith have proven irresistible to Hitchcock, Chabrol, Clément, Minghella, and a great many other filmmakers. Wenders’s own take on Ripley’s Game—presented in a stunning new 4K digital restoration—is among the best of these adaptations, finding complexity, and even a hint of compassion, in Highsmith’s favorite gambit of the shifty but sensitive con man who lures an innocent into a life of crime. Jonathan Zimmerman (Ganz), a mild-mannered picture framer who suffers from a fatal blood disease, crosses paths with Tom Ripley (Hopper), a “cowboy in Hamburg” who trafficks in forged artworks. Drawn into an underworld of shady gangsters (played by the hard-boiled filmmakers Sam Fuller, Nick Ray, and Gérard Blain), Zimmerman is tempted to commit murder for a sum of money that would ensure the welfare of his wife and child after his death. Wenders creates a moody sense of longing and betrayal, quoting from Edward Hopper paintings and the lyrics of Bob Dylan, The Kinks, and The Beatles; his unexpectedly affecting thriller— about how little we know of our lovers, our friends, and ourselves—even made a convert of Highsmith, who told the director that it captured the spirit of Ripley better than any other cinematic treatment of her signature antihero. New digital restoration. 126 min.

Full programm on the web site