An exhibition explores the fantastical world of the painter and internationally celebrated member of the surrealist movement Leonora Carrington. The Hungarian-born artist, designer and educator Gyorgy Kepes, presents 80 photographic works and collages. The show of Cathy Wilkes includes large-scale sculptural installations alongside paintings, works on paper and archive materials. 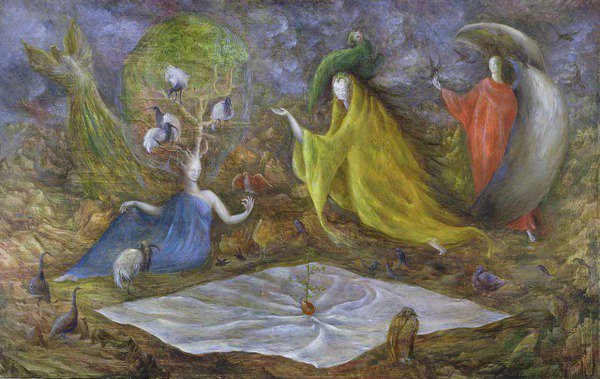 Tate Liverpool is to present the first UK solo exhibition of work by Leonora Carrington (1917-2011) for over 20 years. Leonora Carrington explores the fantastical world of the painter and internationally celebrated member of the surrealist movement.

A prolific painter, the exhibitionlooks at how the artist established her distinctive take on surrealism; characterised by eccentric beings which shift between plant, animal, human and object; between reality and otherworldliness. Taking key paintings as its starting point Leonora Carrington examines Carrington’s diverse practice and uses the artist’s own words, brought together by Mexican author Chloe Aridjis, to narrate the display.

In the mid–1930s Carrington turned her back on her upper-class upbringing in northern England, embarking upon a complicated relationship with German artist Max Ernst in France before spending a short time in Spain during the Second World War. Her creative practice at this point encompassed writing short stories, drawing and painting.

It was after arriving in Mexico in 1942 that Carrington’s practice expanded further as she populated plays, sculptures and textiles with her extraordinary worlds. In 1947 her work was included in an international exhibition of surrealism in New York, where she was the only female British artist featured, establishing her pivotal role within the surrealist movement. In the 1950s and 60s Carrington broadened her practice and embraced set and costume design for productions including her own, Penelope 1957, and films, for which she designed sets and costumes, as well as performing as an actress.

A major highlight in the exhibition will be The Magical World of the Mayas 1964, a 4.5 metre long mural painted by Carrington for the opening of the new Museo Nacional de Antropología in Mexico City in 1964. On display for the first time outside Mexico it serves as a monument to Carrington’s relationship with Mexico, the country she adopted as her home.

Refusing to be constrained or restricted by expectations or conventional limitations, Carrington’s expanded practice has made her an inspiration to many contemporary artists working across a range of mediums. Her patron Edward James commented in 1975 that ‘she has never relinquished her love of experimentation, the result being that she has been able to diversify and explore a hundred or more techniques for the expression of her creative powers’.

Leonora Carrington is exhibited alongside Cathy Wilkes as part of Tate Liverpool’s spring season, Surreal Landscapes. Also running concurrently in the ground floor Wolfson Gallery will be György Kepes. Together they are three artists who, working in different periods, are variously connected by motifs alluding to invented worlds, domestic objects and settings, an interest in assemblage and a sense of mystery.

With support from the Government of Mexico as part of the Year of Mexico in the UK 2015 and sponsored by Edge Hill University, the UK University of the Year.

On display will be photographs, photomontages and photograms, all of which were made shortly after Kepes’s emigration to the United States in 1937. His ‘camera-less’ photograms were made in the darkroom by arranging and exposing objects directly on top of light-sensitive paper; juxtaposing geometric, industrial, typographic and organic forms to create images that are poised between abstraction and representation.

Kepes utilised a wide spectrum of imagery and techniques in his work, including but not limited to: geometric studies of prisms and cones; the refractive properties of mirrors and lenses; mechanical forms including propellers and gears; domestic objects such as fabric, sieves and string and items drawn from the natural world, which ranged from feathers and bone to close-up fragments of the human body.

He graduated in 1928 from the Academy of Fine Arts, Budapest and in the early 1930s worked in the Berlin studio of fellow Hungarian and Bauhaus professor László Moholy-Nagy. Fleeing Nazi Germany for London in 1935, two years later Kepes relocated to Chicago to head the Colour and Light department of the New Bauhaus School, established by Moholy-Nagy in 1937. Kepes wrote his landmark publication Language of Vision 1944 in the same period in which these 80 photographs were made, asserting that ‘the visual language is capable of disseminating knowledge more effectively than almost any other vehicle of communication’.

Highly prolific and interdisciplinary, Kepes promoted collaboration between the visual arts and science and technology throughout his career. His pioneering group of six edited anthologies known as the Vision + Value series, first published in 1965-66 and also included in the exhibition, brought together essays by leading artists, scientists, musicians, designers and philosophers on topics related to visual education ranging from symmetry, rhythm and motion, nature and environmental arts, to the social impact of design.

György Kepes will demonstrate the artist’s experimental approach to photography, a medium which he understood as an instrument of modern technology able to connect his painting, films, scientific experiments and environmental art projects.
György Kepes is programmed in parallel with special exhibitions, Leonora Carrington and Cathy Wilkes as part of Tate Liverpool’s spring season, Surreal Landscapes. Together they are three artists who, working in different periods, are variously connected by motifs alluding to invented worlds, domestic objects and settings, an interest in assemblage and a sense of the uncanny.

Tate Liverpool will present the largest and most comprehensive display of work to date by artist Cathy Wilkes (b. 1966 Belfast). Bringing together more than a decade of the artist’s acclaimed work, this unique exhibition includes several of her large-scale sculptural installations alongside paintings, works on paper and archive materials.

Best known for her imaginary environments which recall poetic visions, her installations evoke places of loss or transformation. Her work is occupied by beings, often of unspecified gender: infants, elders and animals. It includes collections of objects and treasured ingredients accumulated from daily life, for example baking parchments, cloths, towels, cups and plates and biscuits.

On display in the exhibition will be Untitled (Possil, at last) 2013 a piece that was included in The Encyclopedic Palace at the 55th Venice Biennale. Four child-like figures stand around a male figure crouched over a bottle, two are infants, one is a bride; another figure might be a shepherd. As if in a garden, a taller girl stands before an expanded field of broken pieces unearthed from the ground where Possil Pottery once stood.

Born in Belfast in 1966, Cathy Wilkes attended Glasgow School of Art from 1985 to 1988 before completing a Master of Fine Arts at the University of Ulster in 1992. She has exhibited nationally and internationally at prestigious organisations such as the Carnegie Museum of Art, Pittsburgh and the Walker Arts Center. Her work Untitled (Possil, at last) 2013 was included in the 55th Venice Biennale in 2013. In 2008 she was nominated for the Turner Prize for her solo exhibition at Milton Keynes Gallery. Wilkes lives and works in Glasgow.

Cathy Wilkes is exhibited alongside Leonora Carrington as part of Tate Liverpool’s spring season, Surreal Landscapes. Also running concurrently in the ground floor Wolfson Gallery will be György Kepes. Together they are three artists who, working in different periods, are variously connected by motifs alluding to invented worlds, domestic objects and settings, an interest in assemblage and a sense of mystery.