For the exhibition the artist presents a new series of paintings and drawings focusing on women. They are starring his mother, Barbarella, Scarlett Johansson, Mumina, Nofretete and Cara Delevingne. 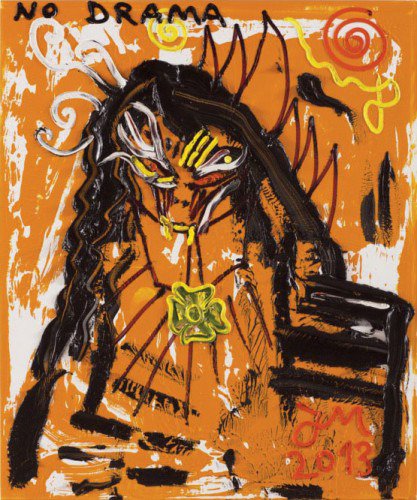 Tim Van Laere Gallery is pleased to announce Spitzenmeesige Women (Schniddeldiddelson). In his second solo exhibition the German artist Jonathan Meese (b. 1970, Tokyo, lives and works in Berlin and Hamburg) is presenting a new series of paintings and drawings focusing on women. They are starring his mother, Barbarella, Lolita, Fräulein K.U.N.S.T., Scarlett Johansson, Mumina, Nofretete and Cara Delevingne, who currently is not only Britain's favourite Topmodel but also Topgurner—making fun of herself by playing with her face, showing what a useful mask it is: a subversive, humorous and playful performative act Meese deeply relates to in his art.

Women—this theme seems unusual for Meese at first sight, whose work is mainly identified with rather masculine dominated subjects like world history, original myths and heroic legends. On closer examination one discovers, though, that from the beginning women play an important role in Meese's painterly and also sculptural work. His early paintings from 2000, show an almost classical approach of act painting, following the tradition of the femme fatale. Although his artistic expression has changed to a more and more abstract expressionist style, his women still often appear in the role of an enchantress, seductress, vampire or witch. But Meese was never really concerned with the destructive power of the female sex inherent in this theme. Nor was he intent upon gender-specific questions. He even queries them in his performances, playing the role of a woman (Zarathustra – Die Gestalten sind unterwegs with Martin Wuttke in 2006), and in paintings showing figures with genitals of both sexes. To Meese the femme fatale is only interesting as an archetype of art, as a symbol of power. That applies to the image of the mother, too. Meese depicted his own mother, Brigitte, in many portraits and installations (MOR with TAL R in 2005)—as an animal, a general, a vampire and the goddess Isis and many more. Following Nietzsche, the mother in the artist's eyes is "the industry of nature." Known for the deconstruction of pictorial codes, Meese renews in his latest work the persistent power of often clichéd symbols which relate to the women as much as to love, the origin and nature: the heart, the spiral and the strawberry.

While dealing with a subject that has been discussed throughout the history of art, these works are a fine example of Meese's ability to play with the seemingly banal and renew its forces. Using his fingers for some paintings in his incomparable expressive manner, he even lends physical power to his figures.