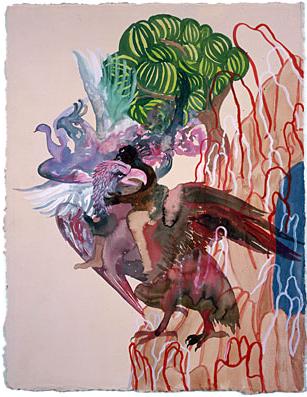 The next installment of the San Diego Museum of Art's acclaimed Contemporary Links exhibition series will feature the internationally renowned Pakistani-born artist Shahzia Sikander. Known for her paintings, drawings, and installations that transport Persian and Indian miniature painting into the realm of the contemporary, Sikander's three-part project, titled Flip Flop, will turn the tables on a group of South Asian paintings from the Museum's Edwin Binney 3rd Collection currently featured in Sultans and Sufis: Paintings from the Deccan.

This display explores the legacy of four Islamic kingdoms in south-central India (the Deccan): the Ahmadnagar, Bijapur, Golconda, and Hyderabad. The visionary, poetic, and richly colored painting styles created for the Deccani courts from the 16th through early 19th centuries were a product of a wide array of cultures that visited and traded with the prosperous kingdoms that ruled there. Also included in this display are religious portraits of Sufi mystics, which are among the finest portraits in the Indian painting tradition.

Sikander, who now lives and works in New York City, will create an elaborate and thought-provoking installation in the Museum's upper rotunda. It will consist of a series of eighteen works on paper that correspond one-to-one to works in Sultans and Sufis, a dramatic site-specific composition of colored vinyl for the central staircase window, and a wall installation of paintings on dense layers of tissue paper.

As a student at the National College of Arts in her native Lahore, Pakistan, Sikander encountered and studied two schools of miniature painting, Indian and Persian. Indian miniatures, as seen in Sultans and Sufis, are small in size, meticulous in detail, and delicate in brushwork. Intended for close, private viewing, they depict, either simply or with densely packed compositions, complex worldsâ€”courtly life, mythological tales, and war. Persian manuscripts offer elaborate calligraphic texts, arabesque forms, and intricate decorative patternsâ€”qualities that represent the opposite of Indo-Hindu visual narratives.

Sikander uses her training in both of these traditional art forms as a basis for the imaginary worlds that she creates. It is from the miniatures' vast storehouse of figures, animals, mythological creatures, landscapes, design, and architecture that Sikander selects elements to be filtered through her personal iconography and political views. She often subverts traditional stereotypes and overlays her own figural images and narratives onto the traditional artwork's subject matter.

Sikander has said, ''When I first left Pakistan to come to the United States, I encountered a new geographical space. Living in this fairly neutral space, I was interested to express in a personal voice antithetical issues concerning historical animosities between India and Pakistan, and to expose Western stereotypes about women from the Third World.''

Accordingly, the artist inserts imagery into her work that expresses the historical turmoil of the region, the split between Muslim and Hindu societies, and the hostile and violent clashes brought about by these differences. Her work often features women in diverse roles and situations that allude to the overlapping histories of her sources and her own life experiences.

In the complex world of the Deccan, as evidenced in the paintings featured in Sultans and Sufis, historical sources are replete with stories of accomplished womenâ€”ladies of the court, performing artists and writers, courtesans, and temple girls. With plenty of information to choose from, Sikander adds her own iconography to pre-existing ones, transcribing the historical visual narratives into her own pictorial language. The subjects of the originals as well as the paintings' marginalia are equally available as resources for her symbolic collaborations.

As a Pakistani and a Muslim, Sikander takes these investigations into the imaginary past, where repercussions of colonialism and relations between ''Orient'' and ''Occident'' function as a place to begin a dialogue between history and self.

Shahzia Sikander was born in Lahore, Pakistan, in 1969 and received her B.F.A. there at the National College of Arts. While in school she chose to take the traditional miniature painting course with Bashir Ahmed, a master practitioner and teacher. Sikander came to the United States in 1993 to attend the Rhode Island School of Design in Providence, where she received her M.F.A. in 1995. Since then she has exhibited widely in North America, Europe, and Pakistan in solo exhibitions, group exhibitions, and biennials. Her work has been seen at the Whitney Museum of American Art, New York; the University of Chicago; the Museum of Modern Art, New York; the Hirshhorn Museum and Sculpture Garden, Washington, D.C.; Le MusÃ©e d'Art Moderne de la Ville de Paris; the Asia Society, New York; the National Gallery of Canada, Ottawa; and the Cleveland Center for Contemporary Art. Sikander is one of the artists featured on the Public Broadcasting Service's television series and publication, art: 21. She currently lives in New York City.