Geert Goiris presents powerful images of sublime landscapes.Regine Petersen uses the stories of meteorite falls as a background for her multi-layered narratives. Broomberg & Chanarin works on the relationship between photography and race. 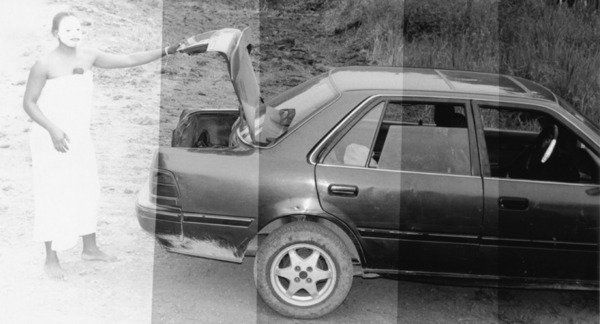 Foam is proud to present the first solo exhibition by Belgian artist Geert Goiris (born Bornem, 1971) in the Netherlands. His unconventional visual language and unsettling tone are still little known within our country.

Geert Goiris occupies a unique position in the field of contemporary photography. He creates powerful images of sublime landscapes, modernist architecture and mysterious portraits of strange, unreal beauty where time and space seems to be suspended. The tension between fact and fiction generates stories, associations and suspense. And yet everything that Goiris photographs is real. The exhibition is excluded from daylight, and the oppressive atmosphere within the images is intensified by spatial interventions and interaction between framed photos of varying dimensions, wallpapers and slide shows.

During the last edition of Unseen Regine Petersen was selected as the best artist of the fair by an international jury who were commissioned by the Outset Unseen Exhibition Fund. Petersen was rewarded with an exhibition in the 3h space in Foam.

In Find a Fallen Star, Regine Petersen (1976, Germany) uses the stories of meteorite falls as a background for her multi-layered narratives; a rock crashing through the roof of an Alabama home in the 1950's and hitting a woman, a group of children recovering a meteorite in their village in post-war Germany, and a more recent event in India involving two Rajasthani nomads. Petersen visited the places and the eyewitnesses and delved into their stories, expanding her photographic observations with found documents and interviews. Petersen sees her work as chapters. Just as meteorites could be considered time capsules, each chapter of her work encapsulates a specific place in a certain time, questioning the notions of memory and history and the relationship between the ordinary and the sublime.

For their solo exhibition To Photograph the Details of a Dark Horse in Low Light, internationally highly acclaimed artists Adam Broomberg (South Africa, 1970) and Oliver Chanarin (Great Britain, 1971) lead viewers through a meandering and disturbing history lesson on the relationship between photography and race.

In response to a commission to 'document' Gabon, Broomberg & Chanarin made several trips to the West African country to photograph a series of rare initiation rituals, using only Kodak film stock that had expired in the 1960's. In the late 1970's the French-Swiss filmdirector Jean Luc Godard famously claimed that this early colour film was inherently 'racist', because it was better at depicting white rather than black skin. Using outdated chemical processes Broomberg & Chanarin salvaged just a single frame from the many rolls of expired film they exposed during these trips. This piece called Ektachrome 78 serves as a starting point for the exhibition.

Another key work in the exhibition is a billboard-sized photograph of Shirley, a 1950's model for the Kodak Eastman Company. Her portrait was distributed to photography labs all over the world as a visual reference for correct exposure. Shirley became a benchmark for 'normal' Caucasian skin. In the eighties, Kodak eventually developed a colour film that was capable of rendering darker tones. The company director described this film as being able to "photograph the details of a dark horse in low light."

Kodak Ektachrome 78 and Shirley are presented alongside works whose parameters were dictated to Broomberg & Chanarin by archival material of their deceased family friend, amateur photographer and anatomist, Dr. Rosenberg. After their trips to West Africa they inherited his darkroom equipment. Some of his notes were about making photographic test strips to determine the correct exposure time. Broomberg & Chanarin followed these instructions to produce a series of oversized darkroom experiments they call Strip Tests.

The connection between photography and racism is further explored in the Polaroid Revolutionary Workers Movement series. In 1970, Caroline Hunter, a young chemist working for the Polaroid Corporation based in the United States, stumbled upon evidence that her company indirectly supported the apartheid regime in South Africa. Polaroid was able to provide their ID-2 camera system to the South African state, to efficiently produce images for the infamous passbooks, which the black population was required to carry with them. The camera included a boost button designed to increase the flash when photographing subjects with dark skin, and two lenses which allowed for the production of a portrait and profile image on the same sheet of film. Hunter and her partner Ken Williams formed the Polaroid Workers Revolutionary Movement, and successfully campaigned for a boycott of the apartheid government. Broomberg & Chanarin's series of Polaroids, made with a renovated Polaroid ID camera, considers the proposition that prejudice might be inherent in the medium of photography itself.