The artist combines early 12th Century traditions of Persian cosmic philosophy with modern-day scientific imaging of the heavens. In the Project space: Abbas Akhavan's presents his exploration of gardens and domesticated landscapes. 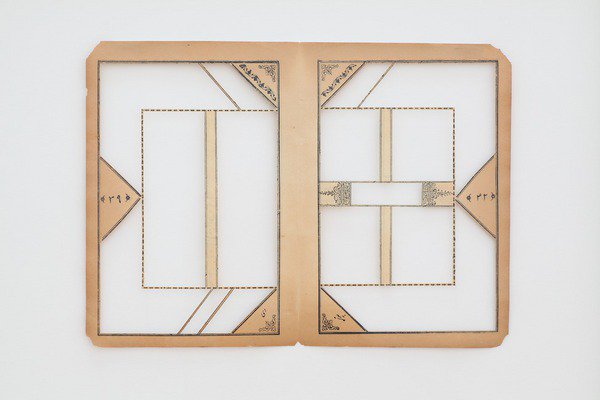 The Third Line is pleased to open its Spring 2015 program with Ala Ebtekar’s Nowheresville \ 'nä-kōja,-abäd \. Working with ideas of the celestial, home to planetary and spiritual configurations that have fascinated humanity since the beginning of time, the artist combines early 12th Century traditions of Persian cosmic philosophy with modern-day scientific imaging of the heavens. His explorations over the years, into the union of both spectrums, and a search for the portals into imagined futures, culminate in this mystical homage to Light.

In the Illuminationist cosmogony of the mystical philosopher Shahabuddin Suhrawardi, the Light of Lights, unlocated in Nowheresville, radiates the Universe into being, dispersed into Nine Spheres. Man who lives on the Ninth Sphere, furthest from the Light, still gazes upon the stars; some just see the sapphire sea of stars; others see the stars with an astrologer eye, but do not see the skies. There are a few though, who know that seeing is a journey, the first step shutting the eyes, and the destination: Nowheresville/Na-Koja Abad, the abode of Simurgh the benevolent, mythical flying creature, atop the cosmic mountain Qaf_ – untouched by time and space.

Inspired by this cosmogony, Ala Ebtekar imagines this journey to/through Light, with every space, silent or clamorous, bright or opaque, used as a portal to Na-Koja Abad. Each opening hidden in clusters of symbolism gazes back at the audience, waiting to be discovered. Ala invites the viewer to make the journey to Qaf, and perhaps catch a fleeting glimpse of Nowheresville.

Abbas Akhavan
Study for a Curtain

Study for a Curtain is a continuation of Abbas Akhavan's ongoing exploration of gardens and domesticated landscapes.
For this special intervention, Abbas will be working in the Project Space on a site-specific installation.
Akhavan's practice ranges from site-specific ephemeral installations to drawing, video, sculpture and performance. The direction of his research has been deeply influenced by the specificity of the sites where he works: the architectures that house them, the economies that surround them, and the people that frequent them.