This exhibition on the subject of youth is concerned with the life plans, wishes, hopes and views of young adults and their position in the familial context and in society in general. 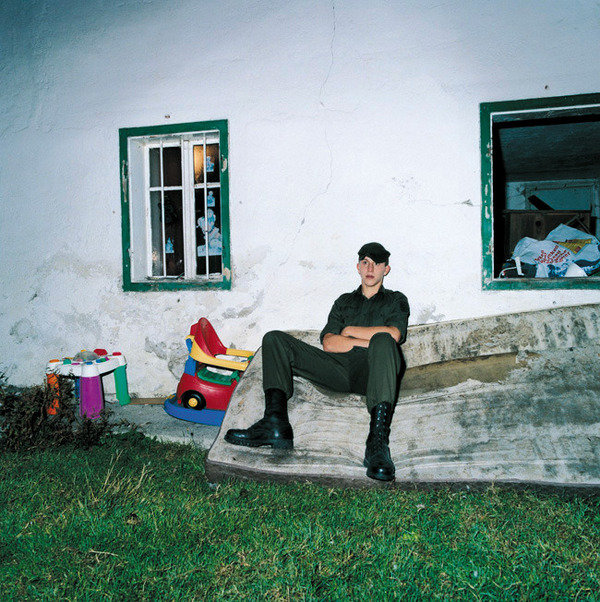 This exhibition on the subject of youth is concerned with the life plans, wishes, hopes and views of young adults and their position in the familial context, among groups of friends and in society in general. On the one hand they derive their guidelines, support and orientation from these while on the other they experience manipulation, paternalism and the pressure of expectations. Adolescence is determined by the difficult processes of finding meaning and the search for one’s own identity. In addition, it is strongly influenced by the discovery and development of the body and contradictory emotional states such as doubt and insecurity but also by rebellion, lightheartedness and a feeling that ‘anything is possible’. The artists are involved with the emotions and living conditions of young people and the context of their de facto social realities. The young adults of today are confronted with a media, advertising and casting society which demands conformity with communication and behavioural codices in an particularly intensive way. The difficulties implicit in being able to ‘keep up’ and the economic and political complications frequently lead teenagers − at the most vulnerable and unstable stage of their lives − into disillusionment, apathy, isolation, aggression, violence and dependence.

Ole John Aandal (*1960 in Oslo/NO, lives in Oslo) is presenting photo works from the series Juvenilia – Constructing a Soul in Capitalist Societies (2009) which was published as a book. Aandal is concerned with the influence that photography and rhetoric in advertising and the new media have on our culture. He poses the question as to how the flood of images and text material influences and changes teenagers when they are most intensively engaged in the process of discovering their identity. The starting point for the Juvenilia series was an interest in the MMS (Multimedia Message Service) phenomenon − quickly shot and easily sent photographs made by mobile phone or computer. Teenagers in particular have made use of this uncomplicated, rapid means of communication for their own purposes. Personal moments are rigorously made public: taking part is everything. The Juvenilia project consists of numerous photographs of young people from the internet − at times these show people in intimate situations even if they are often concealed, with their backs to the camera, out of focus, fragmentary or obscured by colourful artificial lighting at night. This emphasises their vulnerability − a situation between the desire for protection and a simultaneous drive to self-present, wanting to please; the need for attention embedded in the need to draw the outside gaze.

Claudia Balsters (*1978 in Wilhelmshaven/DE, lives in Berlin) is showing photos of young fencers and boxers and the equipment they need to engage in the chosen activity. The works are taken from the Love is Not a Victory March (2009) series which is to be understood as a metaphor − fencing and boxing are martial arts and require similar behaviours and disciplines to those called for in the developmental processes that young people go through. It is about discovering the limits of body awareness, about holding the line between venturing out and withdrawal, between attack and defence, between self-confident action and biding your time. Roles are sought, practiced, have to be endured and reformulated. On the one hand the photographs show young athletes self-confidently posed in their competition clothes and ready to fight and, on the other, as vulnerable, shy and embarrassed in non-staged situations. Love is not a Victory March − the greatest challenge for a young person is probably to love and find themselves.

DK (*1970 in Ljubljana, lives there) is concerned in his photo series, The Thorn (2002), with young people who because of precarious social conditions have become displaced and live on the social periphery. The photographs show young people who have become dependent on alcohol, drugs etc. as a result of a lack of perspective and frustration. Apathy, isolation and loneliness are the consequences − at an age when ‘socialisation’ is imperative for their development. DK has captured the young people in their own environment, unstaged and in the garish colours of the night − withdrawn, turned away, hidden in their clothes, reduced to anonymous, ‘faceless’ bodies on steps, in clubs, on the streets, in grubby meeting places. DK takes a clear position, not only talking impressively about the threats to young people in general, about the social and economic evils in our society, but also drawing an authentic portrait of conditions in his homeland.

Paul Kranzler (*1979 in Linz, lives and works there and in Leipzig) is presenting works from his 120 part photo series, Tom (2007), which has been published in the Fotohof edition (Salzburg). The photographs not only show very personal individual portraits of Tom who, at the time, had just reached adulthood but also portraits of his family, still lives, architecture and interiors of the surrounding environment in which he lives − a farmer’s house in provincial Austria. For two years, (2004−2006), Kranzler visited Tom, his stepfather and stepbrother, took part in their lives and made photographs. The result is an unadorned, sensitive portrait of a young man whose everyday life has nothing unusual about it − he helps on the farm, works on construction sites, is called up for army service, tinkers with car engines, smokes Memphis cigarettes and trains at home with an exercise bike. Kranzler shows us Tom and his family as a functioning social group and sees what is special in their simple lives.

Sira-Zoé Schmid’s (*1985, lives and works in Vienna and Salzburg) contribution to the exhibition is the approx. seven second long photo film, Happy Slapping (2012), in which she engages with youthful potential for aggression and their compulsion to test their strength. ‘Happy slapping’ should be understood as a direct physical attack − often by a group − on usually unknown passers-by, fellow students or teachers. It is filmed using a mobile phone or video camera and subsequently distributed using the internet or mobile phone in order to stage the action in the media and humiliate the victim. 'Happy slapping' began as ‘entertainment’ craze with British youths at the end of 2004. Schmid’s film is based on a re-staging of a fictitious 'Happy slapping' and is a metaphor for the in-fighting and the daily confrontations the individuals face. In Schmid’s film the position of victim and perpetrator alternates in rapid succession.

Axel Stockburger (*1974 in Munich, lives in Vienna) is concerned in his video installations and texts with the consequences of a globalised media world on the cultural self-conception of young people. Here he focuses in the first instance on the worldwide phenomenon of young people immersing themselves in large scale role playing meetings organised by fan clubs. In the video trilogy, White, Red und Sylvanas Transformer, 2011, his attention is on ‘Cosplay’ during which young people transform themselves into fictional characters from computer games or Japanese manga or anime worlds. The film was shot with the best-known of these groups, the Century Noah Cosplay Group from Chongqing/China. They make costumes for the characters from series such as Gundam, Starcraft or World of Warcraft. These transformations, the slipping into fantasy roles of ‘heroic’ figures created by the entertainment industry offers a temporary liberation from everyday limitations but also helps to negotiate a place in real life.