Drawn from the artist's estate, the presentation includes paintings from all periods of Neel's career, together with a selection of drawings. Alice Neel (1900-1984) was interested in the human struggle for survival, and in mankind's capacity for resilience in the face of hardship and deprivation. 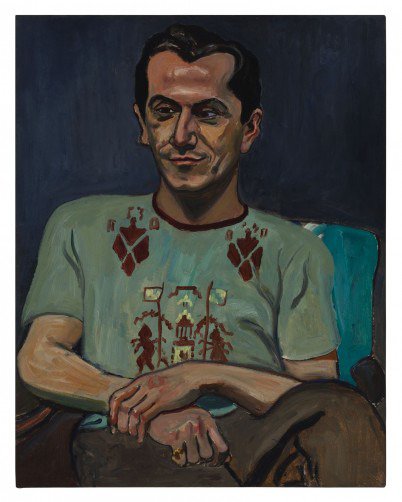 Alice Neel (1900-1984) is widely recognised as one of the great American painters of the twentieth century. Her success, however, has largely been posthumous. In the past decade, interest in her work has grown exponentially, with a series of landmark exhibitions and art historical studies firmly cementing her position on the international stage.

Neel’s oeuvre is fascinating on two counts: not only was she an incredibly gifted painter, but also an astute and idiosyncratic chronicler of some of the most tumultuous decades in American history. While she also painted landscapes and still lifes, Neel is best known as a painter of people.
Her sitters included artists, writers, intellectuals and family members, as well as people living on the margins of society, particularly immigrants. Deeply committed to equality and social justice, Neel was interested in the human struggle for survival, and in mankind’s capacity for resilience in the face of hardship and deprivation. With her distinctive brushwork and remarkable feel for colour, Neel succeeded in capturing the inner psychological depths of her sitters.

Her commitment to truth and dedication to figuration – unfashionable during her lifetime – ensured that her work remained permanently out of kilter with avant-garde movements such as abstract expressionism, pop art and minimalism. Yet her uncompromising approach gave rise to a unique and highly individualistic body of work that continues to exert an influence on contemporary artistic production.

Alice Neel has been honoured with two retrospectives at the Whitney Museum of American Art: one in 1974, and a centennial, posthumous exhibition in 2000, which was initiated by the Philadelphia Museum of Art where it was shown in 2001. The Museum of Fine Arts in Houston, Texas, organised a major exhibition entitled Alice Neel: Painted Truths in 2010. The exhibition travelled to the Whitechapel Gallery, London, and the Moderna Museet, Malmö, Sweden.