Jo Baer presents most recent series of paintings, In the Land of the Giants, they reflects on her life-long interest in history and science. Simon Martin presents a new film, UR Feeling. He is interested in social structures, mythologies and collective memory. 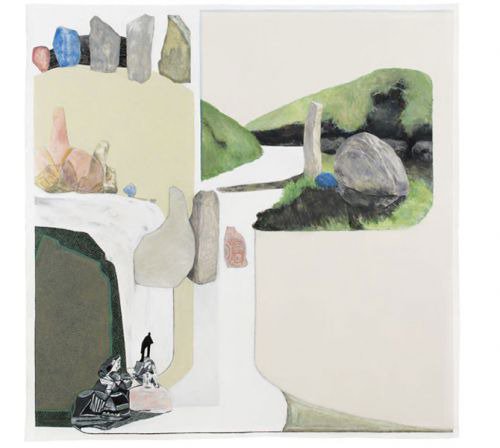 Jo Baer
Towards the Land of the Giants

Jo Baer’s first major show in a UK public gallery centres around her most recent series of paintings, In the Land of the Giants. This series, developed since 2009, reflects on her life-long interest in history and science. Inspired by Palaeolithic cave paintings, Baer saw in these ancient marks, with their instilled meaning, a midway between abstraction and figuration. Depicting esoteric and evocative imagery from her years living in the remote countryside of County Louth (Ireland), springs, stone alignments and phases of the moon are montaged against a backdrop of vast rolling green landscapes. The works trace her fascination in Neolithic innovation, eschatology and the sublime, whilst mapping convergences between humans and nature, and timelines of thought and memory.

Amsterdam based, American artist Jo Baer (b. 1929) is considered one of the key figures in the Minimalist art movement in New York during the 1960s and early 1970s. Her paintings were characterised by precise composition of line and space and her distinctive use of the peripheries of the canvases. Baer describes her early ambition as to make "poetic objects that would be discrete yet coherent, legible yet dense, subtle yet clear." In 1983, she dramatically announced ‘I am no longer an abstract artist’, turning towards figuration and symbolic imagery, fragmenting familiar images in order to render them discomforting.

This exhibition draws a lineage from her earlier minimalist works, through her experiments with the figurative in the 1990s, through to her current emboldened aesthetic. It brings attention to her continued consideration of composition as a means of stimulating an active way of looking, drawing the gaze back and forth across compositions and the canvas as a delineation of time.

Jo Baer was born in Seattle in 1929 and now lives and works in Amsterdam. Her works are part of various public collections including the Museum of Modern Art, New York, Tate London and the Museum fur Moderne Kunst, Frankfurt am Main. Her most recent solo shows were at Van Abbemuseum Eindhoven (2009), Secession Vienna (2008), the Stedelijk Museum Amsterdam and Ludwig Museum in Cologne (2013). Baer took part in the Busan Biennale in 2012 and the 31st São Paulo Biennale.

For his second solo exhibition at Camden Arts Centre, British artist Simon Martin (b. 1965) presents a new film, UR Feeling. This new work takes its title and direction from a quote by architect Peter Eisenman in conversation with Charles Jencks, discussing the redevelopment of Santiago de Compostela’s historic city centre.

Martin is interested in how we understand ourselves through social structures, mythologies and collective memory evidenced in art objects, mass media and popular culture. UR Feeling manifests his research into the built environment through the bodies of two performers and it is the first time he has worked with people rather than objects. The film conveys atmosphere achieved through improvisatory movements and a sound environment. Samples include a reconstruction of a lyre that was excavated from the ancient site of the Mesopotamian city, Ur.

In 2012 Martin exhibited a selection of objects and images at Camden Arts Centre by artists and designers such as Ettore Sottsass, Richard Artschwager and Stephen Shore. The presentation investigated the affect and state between knowing and sensing, in relationship to materiality and the built environment. This exhibition is seen as the ‘preview’ to the film shown now. UR Feeling is also the third part in a trilogy of films: Carlton (2006) questioned how we receive images, how objects are apprehended, or are held in abeyance, by their representations: Louis Ghost Chair (2011) was a meditation on materiality and how objects pass through time as participants in a social world. UR Feeling differs from these earlier works in that it is not narrated by spoken word - its communication is evocative.

Simon Martin lives and works in London. Solo exhibitions include Northern Gallery for Contemporary Art, Sunderland (2013); Camden Arts Centre (2012); Bass Museum of Art, Miami, Chisenhale Gallery, and Lightbox Tate Britain, both London (all 2008). Recent group exhibitions include The Event Sculpture at Henry Moore Institute Leeds (2014); Focal Point Gallery, Southend-on-Sea (offsite commission, 2014); The Imaginary Museum at Kunstveriem Munich (with Ed Atkins) and How to Look at Everything at The Common Guild, Glasgow (both 2012); British Art Show 7: In the Days of the Comet at Hayward Gallery, CCA Glasgow / Tramway and This is Sculpture at Tate Liverpool (both 2011). He will participate in the upcoming group exhibition The Parliament of Things, First Site, Colchester. He was the recipient of a Paul Hamlyn Award (2008) and shortlisted for the Jarman Award (2009).

Image: Jo Baer, Towards the Land of the Giants