Jef Geys plans to show recent work which, like his earlier work, arises out of his critiques of institutions and political-social issues. Transient forms of exhibition and art will enter into varied relationships with a Sol LeWitt's monumental work, the only constant in this presentation, which is itself also temporary. 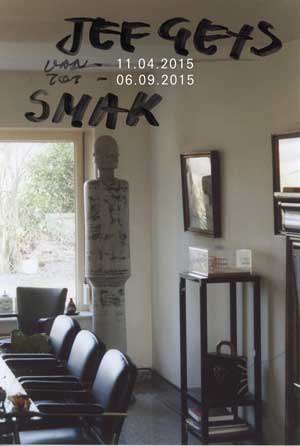 Jef Geys (b. 1934, Leopoldsburg) breaks decisively with the notion of art as an autonomous phenomenon. He radically embraces art as being intertwined with everyday life. Geys reverses or undermines hierarchies by switching identities, infiltrating his work into unusual settings and introducing the ordinary things of life into his art. Since 1958 he has been saving traces of his personal life and his immediate surroundings: the village of Balen. On the Belgian periphery, it is Geys's Archimedean point, as the archive is his medium. As an accumulation of the ordinary, his oeuvre has expanded into a many-branched tangle of associations that will continue to grow in parallel with the real-time activity of the artist. For Geys, exhibitions are occasions to distil new syntheses from his archive, thereby questioning clearly delineated patterns of thought concerning art and life.

Geys's presentation in S.M.A.K. unfolds in three chapters, embracing his relationship with the Ghent museum and his presence in the collection of other Belgian museums. The exhibition and the way it came about reflect the organizational structure of the museum.It starts by outlining an unfulfilled event, linked with his current exhibition venue, in the form of a floor plan from S.M.A.K.'s neighbouring museum, the Museum of Fine Art (MSK), which hosted the S.M.A.K. from 1976 until its own building opened in 1999. The floor plan refers to an exhibition project once initiated by its founding director, Jan Hoet, who ultimately abandoned the plan. Geys thus traces out an event that never happened.

At the centre of the exhibition, Geys opens up his archive by presenting no less than 800 graphic, text- or collage-based archive items displaying his non-hierarchical filtering of any event of interest: from arts to sciences, religion, politics and back. Furthermore, Geys premieres his paper doily drawings in a museum context. At irregular intervals he visits a local bar, where he copies newspaper headlines that attract his attention onto the paper doilies on which his coffee is served. From time to time he adds comments or drawings, sometimes serious, sometimes ironic or humorous.

The exhibition culminates in Geys's response to the government-imposed cooperation between four leading museums of contemporary art in Flanders: Middelheim Museum and M HKA (Antwerp), Mu.ZEE (Ostend) and S.M.A.K. (Ghent). In 2009 the collaborative knowledge platform CAHF (Contemporary Art Heritage Flanders) was initiated by and built around the collections of these museums. Geys overemphasizes the significance of this structure by presenting each museum's webpages and reproductions of all the works of his in its collection, centred on four of the artworks themselves.

Geys's specific pursuit of leveling all obstacles between art and people is made concrete by activating S.M.A.K.'s museum guards as mediators of the show, and by providing advertising space for local businesses from his hometown of Balen, as well as in critical reminders of his participation in Chambres d'Amis (1986), Jan Hoet's historical exhibition which breached the borders between public and private.

Sol LeWitt
From the Collection

Sol LeWitt (°1928 - +2007, US) was one of the most important minimal and conceptual artists. He was one of the founders of the radical, rationally-oriented aesthetic that was deployed as a reaction to the emotionally-oriented American Expressionism of the 1950s and 1960s. In Minimal Art, the form of the artworks is reduced to the extreme. Conceptual Art went one step further by making the concept or underlying idea of an artwork more important than its beauty or physical form. A major element of both movements is that the artist, as a maker of art, fades into the background. In 1968, LeWitt began creating his ‘wall drawings’: monumental, usually geometric wall drawings that were produced following clear and strict instructions, no longer by the artist but by his assistants. In 1976, S.M.A.K. purchased one of Sol LeWitt's wall drawings: ‘Wall Drawing No.36 / Intersecting Bands of four Colors (Black – Blue – Red – Yellow) from four Directions – 90 cm wide (symmetrically)’ (1970).

This piece will be executed on a large scale for the first time since the museum's opening in 1999. It is also the beginning of a presentation-in-progress on the Minimal Art and Conceptual Art from the S.M.A.K. collection and for a number of performances that take the wall drawing as their starting point. In this way, transient forms of exhibition and art will enter into varied relationships with Sol LeWitt’s monumental work, the only constant in this presentation, which is itself also temporary.

S.M.A.K. Museum of Contemporary Art
Jan Hoetplein 1 B-9000 Ghent Belgium
Hours
From Tuesday till Sunday: 10 am - 6 pm; closed on Monday.
Closing time cash-desk: 30 minutes before closing of the museum
Entrance fees
€ 8: individual visitor
€ 6: groups up to 15 persons, 65+ years, inhabitants of Ghent.
€ 2: young people under the age of 26
For Free: for children up to and included the age of 18