One of the few female artists associated with the 1960's Light & Space Movement in Southern California, Corse is primarily known for her minimalist, monochromatic white or black paintings. 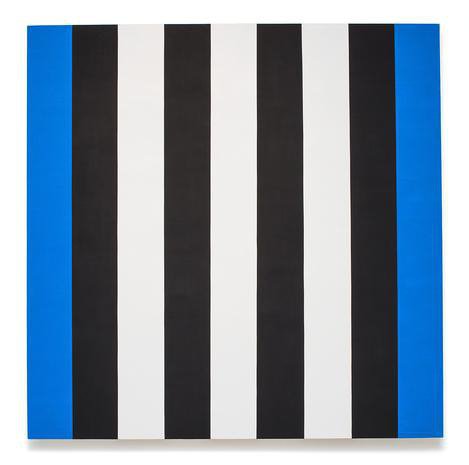 Lehmann Maupin is delighted to announce the second gallery exhibition of paintings by Mary Corse, featuring new work involving her rare use of color. One of the few female artists associated with the 1960’s Light & Space Movement in Southern California, Corse is primarily known for her minimalist, monochromatic white or black paintings. The artist will be present at an opening reception at 536 West 22nd Street on Thursday, April 23 from 6-8PM.

Corse’s art practice is rooted in the viewer’s perception; she creates works that alter in appearance as they are physically and visually experienced. Reflective vertical bands of paint appear to brighten and become more illuminated, or darken and sink back into the canvas as the viewer changes position in relation to the painting.

Corse achieves this effect by using her unique technique of mixing the acrylic paint with microspheres—tiny reflective glass beads commonly used in the white lines of lane dividers on highways. Brushwork is also an important aspect of Corse’s technique, with the artist’s hand intentionally left visible on the canvas. Shifting light either exposes the brushwork and texture of the microspheres, or reveals a flattened, uniform surface. Corse’s painterly approach defines her work within the Light & Space Movement, setting her apart from her contemporaries who strive to remove all evidence of the artist’s touch for an almost mechanically perfect surface.

The 12 new paintings in the exhibition will be displayed according to color—specifically primary colors, referring to traditional color theory in art. Each of the four gallery rooms in Lehmann Maupin’s new space at 536 West 22nd Street will feature either red, blue, yellow, or white and black paintings. Infusing these colored bands of paint with light through the microspheres, Corse mimics how human perception of color is an individual and subjective process, with the brain responding to the stimuli produced when incoming light frequencies react to different cells in the eye.