Chamber Music. His concern with the emotional, intellectual and psychological aspects of space is expressed in various media ranging from drawings, sculptures and films to installations and actions in public space. 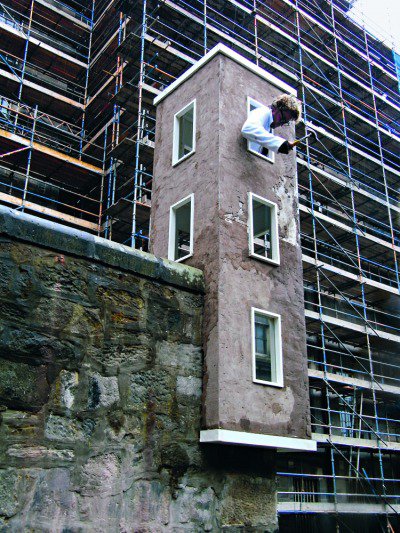 Florian Graf moves through the world very much like a flâneur who allows himself to drift in order to observe and reflect. His attention is particularly drawn to architectonic and social situations and their reciprocal interactions. The cosmopolitan artist with Appenzell roots is especially interested in how we install ourselves in our lives and the effect that spaces have upon us. Graf’s concern with the emotional, intellectual and psychological aspects of space is expressed in various media ranging from drawings, sculptures and films to interventions, installations and actions in public space.

In his exhibition «Chamber Music», composed specifically for the premises of Kunst Halle Sankt Gallen, Florian Graf examines the triad of public space, private space and natural space. These fields each occupy one of the three exhibition halls. The poetic image that Graf creates leads us to reflect on how public space is altering, how desires for private and intimate space are changing and how our relationship to landscape or to “nature” has become a new challenge. The starting point for these deliberations is the observation that the life forms of our global society oscillate between old, still influential social models and the anticipation of a precarious future unconnected to clear visions or utopias. In this context, living - “installing oneself in the world” - and thus space itself becomes a question.

Graf reflects the essence and the effect of public, private and natural space with the help of three forms which appear in each of the exhibition halls in various materials and dimensions and which each take on various roles. In the first hall, public space, the three forms can best be described as architectonic elements: they are columns, gateway, building and sculpture at the same time and evoke the feeling of moving through a town. In the second hall, private (living) space, the three forms are purely decorative elements: as ceramic vases they brighten up the space and contribute to its cosiness. In the last hall, nature influenced by mankind or the artificial landscape, the forms reappear as sculptures with an ensemble of plinths in the form of a fountain reminiscent of a gravestone or as a flower trough.

In the Sankt Gallen exhibition transformation – a recurrent theme in Florian Graf’s artistic work – is part of his reflection on the essence and the effect of spaces and refers particularly to the changing roles that we take on as users of public, private and natural space. With architectonic interventions, display variations and material translations he critically but humorously prompts a dialogue with influential models of life and society.