This is the first public museum exhibition of drawings from the private collection of one of the most influential figures in 20th-century design education. 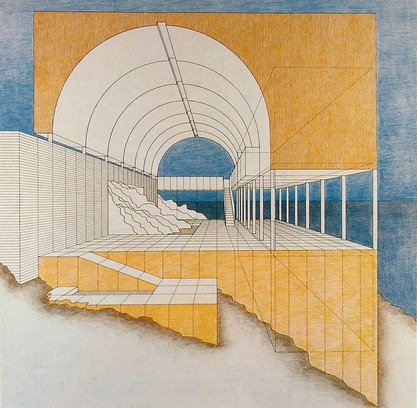 The RISD Museum presents Drawing Ambience: Alvin Boyarsky and the Architectural Association. Co-organized with the Mildred Lane Kemper Art Museum at Washington University in St. Louis, this is the first public museum exhibition of drawings from the private collection of one of the most influential figures in 20th-century design education.

Drawing Ambience highlights the impressive collection of drawings assembled by the late Alvin Boyarsky during his pivotal tenure as chairman of the Architectural Association (AA) in London. Boyarsky argued that architecture was not only a profession but also an artistic venture—an open, wide ranging practice that comprises drawing and publication as much as it engages design and construction. During his time leading the school, he orchestrated an ambitious exhibition and publication program that situated drawing as not only a representational tool, but as a form of architecture in its own right. Drawing Ambience explores Boyarsky's role as a collector of drawings and also, metaphorically speaking, of the ideas and people that have come to define a key moment in architectural history.

Encompassing site plans, design proposals, unbuilt works, and theoretical investigations, Boyarsky's collection reflects the collapse of a singular canon of modern architecture and the blossoming of new and varied approaches that are often grouped under the diverse and varied phrase "postmodern architecture." Highlights range from Eduardo Paolozzi's appropriations of pop culture to the technological utopianism of Archigram's David Greene and Michael Webb to the gestural mark making of Libeskind and Peter Wilson.

The AA of the 1970s and '80s is often considered one of the last great centers of hand drawing to flourish before the rise of computer-aided modeling and draftsmanship. Boyarsky's collection of architectural drawings, culled from the work of students and practitioners who passed through the school, constitutes a visual record of an important transitional moment. At the same time, its emphasis on the tactile and exploratory foreshadows the renewed interest—in our own digital age—in links between the hand and the imagination.

Publication
A richly illustrated 160-page book—also titled Drawing Ambience: Alvin Boyarsky and the Architectural Association—accompanies the exhibition. Co-published by the RISD Museum and the Kemper Art Museum, the book situates Boyarsky's collection within the context of his leadership of the AA and explores the medium of drawing in relation to architectural practices during the pivotal decades of the 1970s and '80s.

The book is distributed by the University of Chicago Press and is available at RISD WORKS, the Museum shop and at the Mildred Lane Kemper Art Museum.

Drawing Ambience: Alvin Boyarsky and the Architectural Association is co-organized by the RISD Museum and the Mildred Lane Kemper Art Museum, part of the Sam Fox School of Design & Visual Arts at Washington University in St. Louis. The exhibition was on view at the Kemper Art Museum in fall 2014.

Drawing Ambience is co-curated by Jan Howard, Chief Curator and Houghton P. Metcalf Jr. Curator of Prints, Drawings, and Photographs at the RISD Museum, and Igor Marjanović, Associate Professor of Architecture at the Sam Fox School of Design & Visual Arts, Washington University. Exhibition design is by Boyarsky Murphy Architects in London and 3SIXØ in Providence.

Support for Drawing Ambience is provided by the Graham Foundation for Advanced Studies in the Fine Arts and the Rhode Island State Council on the Arts (RISCA).