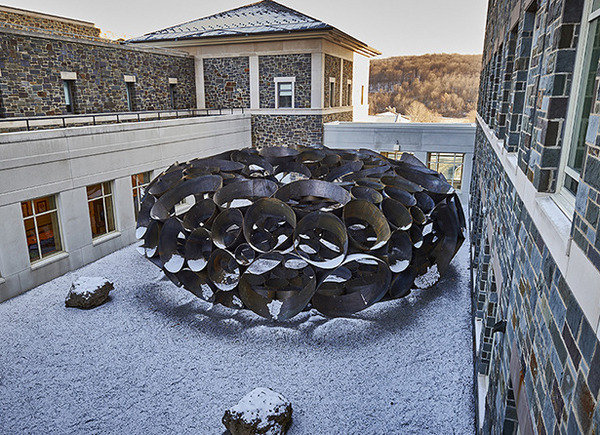 The creation of Odin was supported by the Picker Interdisciplinary Science Institute at Colgate University. The three-year research project lead by DeWitt Godfrey, artist, brought together mathematicians Thomas Tucker and Tomaz Pisanski, architect and engineer Daniel Bosia and a group of associate researchers-to engage with mathematical, computational and structural questions that could only be addressed by a collaborative team of investigators with complementary expertise. From the outset we chose not to use mathematics and computer science to solve engineering problems, instrumentally demonstrate mathematical forms or fabricate existing physical models but rather intended these methods to generate ideas, mechanisms and processes in a process of form and problem finding. The project applied the analytic and productive power of mathematics and computer science at the heart of the creative process-in order to create structures that reflect the complexity of the natural systems that these digital platforms emulate and to investigate further their mathematical implications. The power of mathematics lies in its capacity to describe seemingly complex objects in simple terms or to generate them by simple rules, such as recurring patterns in nature like the Fibonacci series and fractal geometries that manifest themselves across many seemingly unconnected phenomenon. Mathematical structures also allow speculation in spatial geometries beyond our own experiences; for example, mathematical objects may have greater symmetry in the abstract than they have when they are realized in three-dimensional space, allowing for an analysis unencumbered by two- and three-dimensional manifestations of form. New computer modeling and visualization tools allow the picturing of these non-linear natural geometries and higher dimensional mathematical objects in unprecedented ways. These parametric modeling tools have deeply transformed design work itself. More directly, physical objects (sculpture) can be designed and fabricated with one set of parameters; a set of rules governing its structure and order can then be deduced, and an abstract mathematical object produced. This symposium brings together members of the original team, our associate researchers and fabricators and practitioners at the cutting edge of digital design and fabrication.