New Wave Digits. Stacked columns of polyhedra, formed in steel, corian or MDF, populate the gallery space. A new body of sculptures conceived and designed within a digital imaging program. 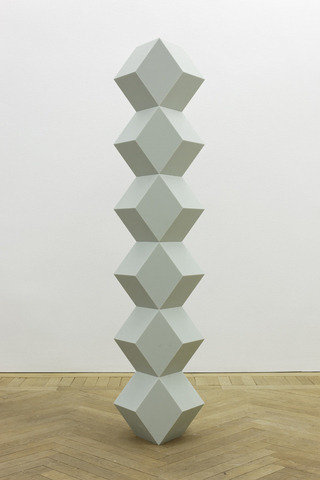 Simon Lee Gallery is pleased to announce an exhibition of new sculptures by acclaimed artist Angela Bulloch. Stacked columns of polyhedra, formed in steel, corian or MDF, populate the gallery space. Conceived and designed within a digital imaging program, this new body of sculptures, with their stylized geometry, electronic glow and manufactured surface sheen, might seem to channel New Wave Science Fiction - a genre typified by its imaginative, futuristic and often inaccurate notions of science and technology. Just as that genre’s writers accelerated the age’s visions of modernism, these geometric stacks suggest Brancusi’s Endless Column as if refracted through vector graphics, reinforcing a sense of ‘retro-futurity’. The temporality is confusing. Today, when much sculpture seems to be looking back toward the purity of minimalism, these works seem to refer to a later moment, when culture took imaginative leaps forward, postulating a world of stark angles and saw- tooth synthesizers.

The ambiguity of the word ‘digits’ - implying fingers, numerals or data - provides a point of entry to one of the fundamental themes of Bulloch’s practice - the integration of the human subject with technology. Her interest in cybernetics, a field of study that links biological, social and technological systems, has been apparent in previous installations in which technology mediated our interaction with the work, in effect making us co-producers. In these works the interrelation is nuanced and layered - the sculptures are subtly anthropomorphic, suggesting bodies or parts of bodies. Two of the sculptures entitled ‘Anima’ and ‘Animus’ make reference to Jung’s theory of archetypes: the male and female qualities that we subconsciously attribute to inanimate objects. From a cybernetic perspective this reference creates an intriguing paradox; could there be a trace element of the human within the non-living world, or is it merely psychological projection?

The works in the exhibition reveal another sense of indeterminacy; the flat planes and angles of each sculpture appear to animate as one moves around them, creating a disorienting illusion of shifts between two and three dimensions. As with other works in her corpus, this playful optical effect belies a complexity; the sculptures are essentially generated by perfect equations, their flattening out into patterned surface points toward their origins as endlessly replicable simulations of depth and volume. This slippage between the real and the virtual is perhaps melancholic, invoking an idealised space beyond our apprehension.

Concurrently with the exhibition, an outdoor sculpture in steel will be installed on Mount Street, Mayfair, at the entrance to Mount Street Gardens.