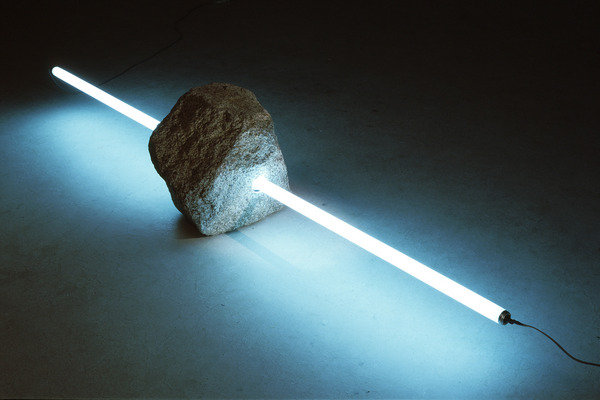 Simon Lee Gallery is pleased to present ‘Five Decades: Sculpture and Works on Paper: Koji Enokura, Noriyuki Haraguchi, Tatsuo Kawaguchi, Noboru Takayama’. The exhibition brings together the work of four crucial figures whose early practices are affiliated with the post-war Japanese artistic phenomenon Mono-ha (School of Things). Spanning a period of five decades, the works on display examine the different artistic tendencies that developed out of the lineage of Mono-ha, highlighting overall the importance of this movement in creating a unique Japanese post-modern aesthetic.

Mono-ha is the name given to a group of artists working in Japan in the late 1960s and early 1970s. These artists are linked by a common desire to create relationships between man and matter, people and things, the industrial and the natural. Working with everyday “things” such as glass, stone, steel, rope, iron, wood, and oil, these artists sought to go beyond the materiality of the work and the physicality of things, to discover new worlds within. As Mono-ha was not a formal art group bound together by a set of doctrines, this allowed for inevitable changes in expression amongst its artists to develop. After 1971, and the decades following, artists cultivated within this loose-knit community began to go their separate ways. Some artists continued to develop the same tendencies associated with their early practices while others completely broke out of the Mono-ha sphere.

Working in numerous modes of expression and with a variety of materials, Tatsuo Kawaguchi (b. 1940) is consistent in his approach to matter and subject, and his desire to reveal the inner life of materials. Stone and Light no. 4 (1989), first conceived in 1971, counter-poses a natural stone with the light of a fluorescent lamp. Reminiscent of a Mono-ha interest in man and matter, two materials that seemingly have no relationship to one another are forged together resulting in a striking work of art. The COSMOS works (1974-1975) also included in the exhibition, take the idea of creating new relationships one step further by developing a link between the viewer and the past. Adopting the language of conceptual art and using astrophotography, Kawaguchi carefully writes numbers next to the stars documenting the moment when light left them to come to earth and in turn creates a dialogue with the past and the unseen.

Noriyuki Haraguchi (b. 1946) works in a more industrial and pared-down idiom than that of his contemporaries, veering towards a related Minimal vocabulary. The artist’s polyurethane paintings epitomize his desire to favour industrial materials over the natural, while also touching on his interest to investigate political and environmental issues in his work. Haraguchi first developed the polyurethane paintings in 1978 after encountering the material as a floor covering in hospitals, factories and schools in Japan.

For Koji Enokura (b. 1942, d. 1995) overlooked and everyday things served as the subject for, as much as the medium of, his work. In Print (STORY & MEMORY No.1) (1993), a large stained curtain hangs on the gallery wall and develops the Mono-ha tendency to place “things” as intermediary between man and matter. The combination of the stains and the sense of expectancy evoked by the use of the curtain elicit physical tension in the viewer. Enokura was drawn into photography by a need to document his site-specific installations. The P.W. (Photo Works) series express the sense of alienation felt by many as a result of a rapid modernisation that threatened cultural transmission and social bonds in Japan in the early 1970s. Strange viewpoints of empty interiors, as in P.W. – No. 35 (1974), extract an estrangement between body and space and are far removed from the early tenets of Mono-ha. These photographs do however play a crucial role in the cross-pollination of art and photography that was taking place in Japan at this time and that has had a lasting effect on contemporary art today.

Shown in the lower gallery, a large installation by Noboru Takayama (b. 1944) is an appropriate end to this journey. The most recent work in the exhibition, Fallen Wing – Headless Scenery (2015) represents the work of an artist whose practice remains the most consistent of the four over the past five decades. Railroad tie-based installations have formed the core of Takayama’s tirelessly productive career since graduating in 1968. For Takayama, the railroad ties are linked to the memory of the construction of railroads in Japan after the war, and the lives lost in the harsh labour conditions. The individual components are seen by Takayama as “human pillars”. While the material of the railroad-ties seems related to Mono-ha, the memory and history that are inherent in the material can also be seen as an attempt to explore an entirely different realm.

Simon Lee Gallery is proud to present a solo exhibition of new photographs by renowned American artist Sherrie Levine. African Masks After Walker Evans continues the artist’s questioning of traditional ideas of originality and authorship, developed over four decades, and her interest in the deconstruction of images and objects from the past in order to create new relationships with contemporary audiences today. Through repetition, duplication and restatement, this new series not only re-examines the central and ongoing concerns of Levine’s artistic practice but also revisits one of the most prominent subjects of her oeuvre – the work of Walker Evans.

Throughout her career, Sherrie Levine has periodically returned to the practice of re-photographing photographs. Arguably her most famous work, the After Walker Evans series (first conceived in 1981) received widespread critical acclaim and is seen as a key work of postmodernism. Between 1928 and 1935, Evans was commissioned to document life in the American South at the height of the Great Depression. For her own work, Levine photographed 22 reproductions of Evans’ iconic images that she found in a book of his photography. These photographs exist for Levine, not as copies, but rather as different iterations or versions of their precedents, challenging not only the notion of authorship but also the materiality of history itself. In Levine’s words, ‘The ‘after’ in these works denotes more than the condition of derivation or indebtedness. It is also the temporal and historical ‘after’ as in; ‘Our world comes after Walker Evans’’’.

Thirty-five years later, in a new series of photographs after Walker Evans, Sherrie Levine returns to the earlier project, however, this time the lines between object and image, ownership and authorship are even further blurred. Her subject matter stems from an extensive collection of over 400 photographs of African artworks that were taken by Evans in 1935 when commissioned by the Museum of Modern Art in New York to document the objects of the major exhibition “African Negro Art”. The original photographs were used to create portfolios that travelled to museums across the country, playing a key role in a western reading and understanding of African art, and the canonisation of the objects they reproduced.

For the series African Masks After Walker Evans, Levine has selected 24 images of masks from the original portfolio. By calling attention to their relationship with Walker Evans’ ‘originals’, her images ask complex and multiple questions about the relationship between image and object, original and copy, and in turn question the relationship of Walker Evans’ own images taken in 1935 to the original African objects, and their role in establishing the curatorial canon of so-called ‘Primitive’ art at the time.