Math Bass show includes a selection of paintings from the Newz! Series, recent sculptures, and a video. They reflect the artist's interest in the way bodies move through space. Featuring 15 steel sculptures, more than eighty watercolors, and several videos, Jos de Gruyter and Harald Thys make tragic, comic, and silent portraits of the human condition. To celebrate the final Sunday Sessions, Micachu performs a set. 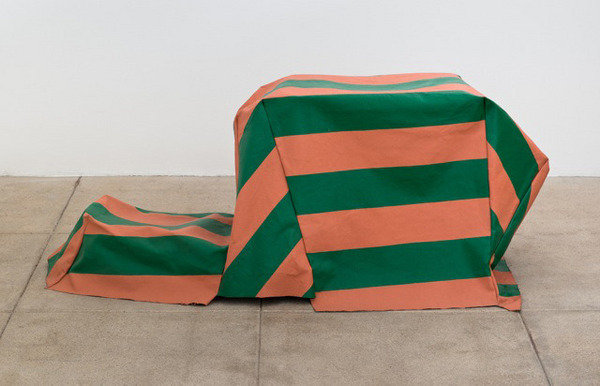 Math Bass
Off the Clock

MoMA PS1 presents the inaugural solo museum exhibition of Los Angeles - based artist Math Bass (American, b. 1981). Off the Clock includes a selection of paintings from the Newz! Series, recent sculptures, and also debut s Bass’s latest video, Drummer Boi (2015). The 2 nd Floor Project R ooms at MoMA PS1 will be architecturally transformed to reflect the artist’s ongoing interest in the way bodies move through space, probing the porousness of defined structures.

Bass is interested in ambiguous images that produce multiple ways of seeing a single composition. The most famous examples of these kinds of pictures include optical illusions like the profile of a duck that also looks like a rabbit, or the profile of an old woman that also looks like a young woman turning her head away. Employin g a simplified formal language — solid colors, natural materials, basic geometric sh apes, and recognizable symbols — Bass’s works oscillate between bodily and architectural forms, emphasizing the tension between containment and mobility.

Certain forms recur throughout Bass’s work, changing colors and shifting their orientations to complicate and prolong the viewer’s engagement with them over time. In the artist’s words,“the scene is set on an axis, and that axis is made to shift.” Off the Clock animates the transition from work or labor to a space of leisure or play. If the clock represents rigidity, linearity, or someone else’s authority, then “off the clock” implies a more personal, open-ended realm that cannot be pinned down. Evoking bo dies, but refusing easy identification, Bass’s work insists upon multiple readings with elusive conclusion.

About the Artist Bass’s work has been exhibited at Overduin & Co., Los Angeles; Wallspace, New York; Laurel Gitlen, New York; Night Gallery, Los Angeles; and Silberkuppe, Berlin; among others. Bass was also recently featured in the 2012 Hammer Museum Biennial, Made in L.A.

The exhibition is made possible by MoMA's Wallis Annenberg Fund for Innovation in Contemporary Art through the Annenberg Foundation.

MoMA PS1 presents Jos de Gruyter and Harald Thys: Fine Arts, an exhibition of works of new and existing work by the Belgian artists Jos de Gruyter (b. 1965) and Harald Thys (b. 1966). Featuring fifteen steel sculptures, more than eighty watercolors, and several videos, it will be the artists’ first museum exhibition in New York City.
The artists make tragic, comic, and silent portraits of the human condition. They are drawn to all that society can’t digest or domesticate, and they create a perverse carica ture that is populated by amateur actors, faces, dolls, animals, and other speechless objects. Their work is deadpan, in all senses of the word: funny and blank at the same time.

Standing at nine - feet tall but eight millimeters thick, the sculptures resem ble cut - out figures or pixelated bodies. Watercolored faces, traced from anonymous images found online, are pinned to each one. Appearing throughout a series of eight carpeted galleries, the sculptures will be the visitors to an exhibition of new watercolo rs. This series of eighty - four watercolors depict the lives and rituals of groups all over the world and a new film, Die aap van Bloemfontein (The Ape from Bloemfontein, 2014), relates a story of impossible and exuberant transformations — a computer becoming a lawnmower becoming a television.

ABOUT THE ARTISTS
Jos de Gruyter (b. 1965) and Harald Thys (b. 1966) have collaborated since the late 19 80s. They have had numerous solo exhibitions at institutions including Kunsthalle Wien, Vienna; M HKA, Antwerp; Kunsthalle Basel; Culturgest, Lisbon; and were included in the Venice Biennale (2013) and the Berlin Biennial (2008). Raven Row, in London, will present a solo show in September 2015. De Gruyter and Thys live and work in Brussels.

Jos de Guyter & Harald Thys: Fine Arts is curated by Anthony Huberman, Director and Chief Curator, CCA Wattis Institute for Contemporary Arts, San Francisco. The exhibition at MoMA PS1 expands on the one presented at the Wattis Institute and is co - organized with Peter Eleey, Curator and Associate Director of Exhibitions and Programs, MoMA PS1. The exhibition is supported by The General Representation of the Gov ernment of Flanders, through Flanders House New York. Additional funding is provided by the MoMA PS1 Annual Exhibition Fund.

To celebrate the final Sunday Sessions of the season, British artist Micachu performs a set entitled Local Holiday, Local Sun, Locals, Local Rain, Local Number, Local Drink, Local Customs. Pulled from her vast collection of audio odds and sods, this one off performance of new material is matched with wildly colorful projections from her sketchbook.

Micachu aka Mica Levi, the 26-year-old leader of Micachu and the Shapes, is the unassuming figure creating tunes which manage to perfectly define these sometimes scary, often overwhelming, but always exciting times. A classically trained composer and musician, Mica garnered wide critical acclaim for her soundtrack to Under the Skin, including a BAFTA nomination for best Original Music in Film. She is currently the youngest individual to be named artist in residence at London’s Southbank Center.