The total site-specific installation Conversion. The show includes sculptures and bas-reliefs, in which figures of 'Neo-Apostles' appear as the bearers of a new sacred knowledge manifested in the stream of virtual information. 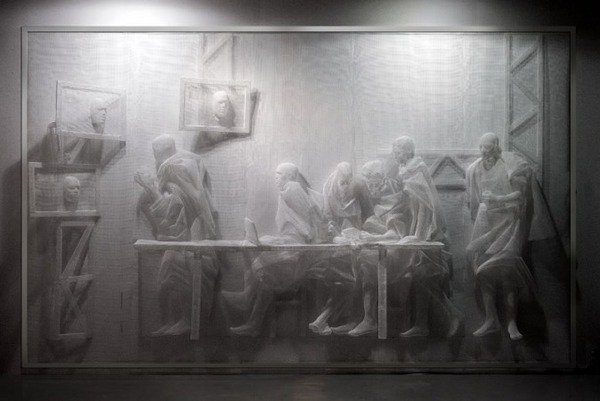 The Moscow Museum of Modern Art, La Fabrique Barbot et Fournier, France and the Triumph Gallery present a solo exhibition of the Recycle Group (Andrey Blokhin and Georgy Kuznetsov), being a Collateral Event of the 56th International Art Exhibition – la Biennale di Venezia.The total site-specific installation CONVERSION will be staged at the church Saint Antonin, founded in the VII century.

The project CONVERSION by the Recycle Group refers to the life of a modern man as it is in the age of the world web and new gadgets. Data transmission speed, constant data refreshing and availability— with every seventh person on earth owning a smartphone – have given birth to the cult of new technologies. The Recycle Group’s project compares the globalization of information networks to the conversion to some new ‘religion’ where the scope of information available in the virtual space is a new presiding deity.

At the ancient church’s hall, Recycle Group will present the ruins of the sanctuary of the XXI century. The show CONVERSION will include sculptures and bas-reliefs, in which figures of ‘Neo-Apostles’ appear as the bearers of a new sacred knowledge manifested in the stream of virtual information. This imposing structure is sited in the traditional position of the church altarpiece. At the centre as if surmounting the altar, is a giant Facebook ‘cross’. The display also includes ‘wooden remnants’ of Noah’s Ark, with familiar icons from smartphone screens identifiable in its fragments.

To make sculptures of the presumed ‘saints’, the preachers of the new technologies, as well as multi-figured bas-reliefs the Recycle Group makes use of polyurethane, plastic mesh, rubber, polyethylene and new technologies. Rubbish becomes art to be kept for future generations, while the artists seek to give their viewers an idea of the future traces to be left by the paradoxes of our own age, of what will go down in history. Their sculptures and bas-reliefs take on the appearance of ancient monuments that display the ravages of time, as if artifacts from some lost and forgotten civilization.

The forms and compositions of the CONVERSION project are influenced by traditional Christian iconography, yet they are disseminated by contemporary motifs like the info graphics of modern gadgets and app logos. In one relief among the ‘holy’ figures rise cell phone masts, while another scene entitled In Search of the Web depicts crowds of people struggling to get online with their mobile devices. As if by ironic coincidence there is an existing cell phone mast sited in the bell-tower of Sant’Antonin church.

According to James Putnam, the exhibition curator: “Their [the Group’s] art is characterized by a sophisticated provocation juxtaposing incompatible subjects like archetypes and classical forms with contemporary cultural icons. CONVERSION proposes a parallel between the Christian enlightenment and the digital technological revolution where sacred knowledge formerly residing in the heavens is now located in the virtual space of The Cloud.”

ABOUT THE CURATOR
James Putnam is an independent curator and writer. He was a curator of the British Museum’s Contemporary Arts and Cultures Program from 1999 to 2003. He was also a former curator of the British Museum’s Department of Egyptian Antiquities (1985 –1998). In 1994 he conceived and curated the groundbreaking exhibition Time Machine which was involved juxtaposing works by contemporary artists with ancient sculpture in the British Museum’s Egyptian Gallery. His book Art and Artifact – The Museum as Medium (Thames & Hudson in 2000/10) surveys the interaction between contemporary artists and the museum. He has curated an ongoing series of critically acclaimed projects with contemporary artists at the Freud Museum, London. He has also curated exhibitions at the Petrie Museum, University College London and was Associate Curator at the Bowes Museum, County Durham from 2004 to 2006. He was appointed curator of Arte ‘all Arte 9, in Tuscany in 2005 and was on the curatorial committee for the 2006 Echigo Tsumari Triennial, Japan. In 2009 he curated Distortion and Library at the 53rd International Art Exhibition of la Biennale di Venezia. He was a curator for the Busan Biennale, South Korea (2010). He curated the Knowledge exhibition for the 54th International Art Exhibition of la Biennale di Venezia (2011) and White Light/White Heat – Glasstress as a Collateral Event of the 55th International Art Exhibition of la Biennale di Venezia (2013). From 2003-2004 he was Visiting Scholar in Museum Studies at New York University and is currently Senior Research Fellow, Exhibitions at the University of the Arts, London.

ABOUT THE MUSEUM
Moscow Museum of Modern Art is a young active institution playing an important part on the Russian contemporary art scene. It is the first state museum in Russia that concentrates its activities exclusively on the art of the 20th and 21st centuries. Museum collection numbers nearly 12 000 items and is ever growing. Several venues in the historic center of Moscow present a wide specter of Russian and world contemporary art. Museum research focuses principally on its own collection. Its library holds an extensive collection of studies in art by Russian and foreign authors. The Research Laboratory of the Moscow Museum of Modern Art is one of the major technical research centers specializing on scientific analysis of art objects.

TRIUMPH GALLERY
Triumph Gallery was founded in 2006 by Emelyan Zakharov and Dmitry Khankin. The gallery focuses on contemporary art and works with major Russian and international artists. Triumph Gallery is proud to represent a number of Russian leading contemporary artists, including AES+F, Alexander Brodsky, Alexander Vinogradov and Vladimir Dubossarsky, Alexey Belyaev-Gintovt, Recycle Group. The gallery also presents works of such foreign artists as Damien Hirst Chapman brothers, Wolfe von Lenkiewicz, Tim Noble and Sue Webster and others. Besides its own exhibition space, Triumph Gallery organizes big-scale shows in other art venues in Russia and abroad and supports young artists. In 2013, Triumph together with CEH Manege launched a new project Great Expectations in support of young new media artists. In 2013 the gallery initiated an interdisciplinary research and artistic project Department of Research Arts.