Singularity. Catalonia in Venice. The artist poetically interweaves what look like contemporary images filmed in Lleida, with less clearly realistic ones, thus creating a sort of ancient myth-like a fable. 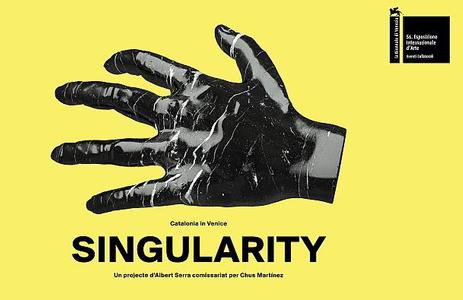 As Chus Martínez states, “The original inspiration for this eight-hour-long moving image installation was a discussion between the artist and myself about the notion of the singularity. The singularity is the concept that mathematicians and artificial intelligence researchers use to name the moment where our relationship with the machine changes, when technology ceases to be a tool and becomes a companion to the human species. But what is the singularity here referring to? It names a contemporary condition, defined not just by the conditions of capital and economy but by a new epistemological turn in which we share our lives with machines and nature in a different way. Or put another way, the singularity is another name for cinema. Cinema represents one of the most eloquent and close relationships mankind has established with a device. We entrusted the camera with completely recreating our way of describing our deepest insight into our feelings, in the same way our eyes relate to our sense of life. And so we can assume that cinema has learned something from us and that the cinema machine, this very special machine intelligence, is transforming the future of the very idea of a picture in movement.

Albert Serra poetically interweaves what look like contemporary images filmed in Lleida, Catalonia with less clearly realistic ones, thus creating a sort of ancient myth—like a fable. Some sections of the film are composed of a flow of purely visual and beautiful material. But in others the artist Albert Serra tells us stories that for him represent “ancient” and novel ways of talking about cinema. This very special piece by Serra attempts to create a “legend”—a visual and sensory memory for the viewer based on motifs that will mark a shift in our understanding not of what cinema is able to tell but of the way cinema can transform us and prepare us for a different future of the image, man and the machine.”

In the words of Albert Serra, "In the 21st century, images are on the run and don't turn back; the many screens cast them and they explain themselves. The artist perhaps creates them, grasps them, exposes them in a baroque and titanic effort. In their death throes, images can still serve to illustrate the world with visual suffocation, but also with the ambition to narrate, with imagination. From mining pioneers to the gold rush of the early 20th century to the present-day regulated and technical industry of land use, Singularity explains the last major transition, the last with man at its core and the last that can still sustain the presence of the body as the driving force of all human transformation. Afterwards, the machines..."

This project includes a 32-page publication jointly published by the Institut Ramon Llull and Mousse which will be available as a free download on the project’s website. The exhibition will also be accompanied by a website: http://venezia2015.llull.cat Graphic design for the project was done by Omar Sosa and Ana Domínguez and Guri_Casajuana Arquitectes are the authors of the exhibition interior design.

Martínez’s proposal was selected by a jury chaired by Marta Gili, Director of Jeu de Paume. The other members of this jury were Bartomeu Marí, Director of the MACBA; Joan Minguet, President of the Associació Catalana de Crítics d’Art (ACCA); Xavier Antich, President of the Board of Trustees of the Fundació Antoni Tàpies; Martina Millà, Head of Programming and Projects at the Fundació Miró; Llucià Homs, Director of Cultural Sector Promotion at the Institut de Cultura de Barcelona; and Damià Martínez, Head of the Creation Division at the IRL.

Chus Martínez
Chus Martínez (La Coruña, 1972) is currently Head of the Art Institute of the Fachhochschule Nordwestschweiz (FHNW) in Basel, Switzerland. She holds a BA in Philosophy and History of Art from the Universitat Autònoma de Barcelona and also completed a master’s degree in curatorial studies at Bard College in New York. Over her career she has held the positions of Artistic Director at the Sala Rekalde in Bilbao (2002-2005), Director of the Frankfurter Kunstverein (2005-2008) and Chief Curator at the MACBA (2008-2011). More recently she has worked at the Museo del Barrio in New York and was a member of the curatorial team for dOCUMENTA (13) in Kassel, Germany.
In 2005, Martínez curated the National Pavilion of Cyprus for the 51st International Art Exhibition of la Biennale di Venezia, presenting a project by Panayiotis Michael and Konstantia Sofokleous. She was also a member of the advisory team for the Carnegie International exhibition in 2008 and participated as a guest curator in the 29th São Paulo Biennial in 2010. In addition, she has organized exhibitions around the world, has spoken at numerous seminars and conferences and has served as a member of juries for a number of prestigious events. She publishes regularly in art journals.

Albert Serra
Albert Serra (Banyoles, 1975) is a film director and producer. His first film Crespià, the Film Not the Village (2003) was not screened commercially. He later presented Honor de cavalleria (winner of the 2006 Barcelona Film Prize for Best New Director and for Best Film in Catalan) and El cant dels ocells (for which he won the 2009 Gaudí Prize for Best Film).
In 2009, he was chosen as the avant-garde cinema icon of the Quinzaine des Réalisateurs at the Cannes Film Festival.
In 2012, he was one of the artists selected to participate in dOCUMENTA (13) in Kassel, where he showed his film Els tres porquets. The following year he became the first Catalan director to win the Golden Leopard prize for Best Film for Història de la meva mort (2013) at the Locarno Film Festival.
He has recently been invited to show work at the Centre Pompidou in Paris (2013) and Bozar in Brussels (2014), where he was given carte blanche.

Institut Ramon Llull
The Institut Ramon Llull is a public consortium established in 2002 with the aim of promoting the Catalan language and culture abroad. This mission is accomplished by providing broad international exposure to writers and artists, encouraging artistic and cultural exchanges, and supporting Catalan language and literature studies in universities. Currently, the consortium is formed by the Government of Catalonia and the Barcelona City Council.