Sculpture. He approaches the line between figuration and abstraction very openly and does not view it as a contradiction. The reference is fluid, changing, but it does always come back to the human figure. 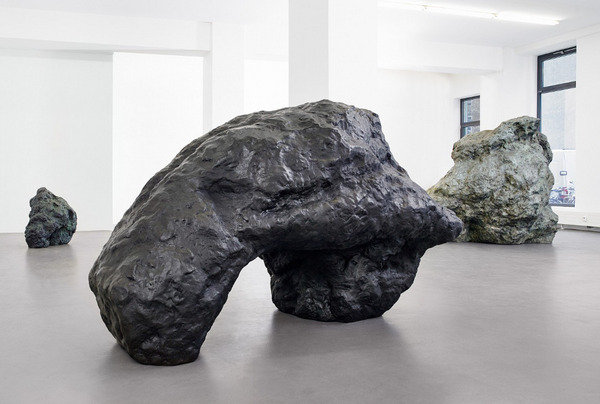 The Buchmann Gallery is delighted to announce the second solo show of works by the British/American sculptor William Tucker (b. 1935 in Cairo, lives in Williamsburg, MA).

In the 1970s, Tucker belonged to the highly influential circle of English sculptors that included Philip King and Tim Scott, who were presented as the "New Generation" in the eponymous exhibition at London's Whitechapel Art Gallery in 1965. This group had a decisive impact on the development of abstract sculpture and was largely instrumental in broadening the concept of sculpture. In 1966, William Tucker was invited to take part in the seminal exhibition Primary Structures at the Jewish Museum in New York, a decisive moment in American Minimal Art. During this period he also made a name for himself as a theoretician, critic and curator. In 1972, Tucker published The Language of Sculpture as well as reviews and essays in Studio International, the British counterpart of Artforum. In 1975, he organised The Condition of Sculpture show at the Hayward Gallery in London.

William Tucker's current work, which is being presented in this solo show, references the human body. Against the background of his earlier work this may seem surprising. However, Tucker approaches the line between figuration and abstraction very openly and does not view it as a contradiction. The reference is fluid, changing, but it does always come back to the human figure. "Any sculpture is a figure in a sense, if it reads as a total, a unity." (William Tucker, First Magazine, 1961)

Despite their figurative reference, the shape of the sculptures cannot immediately be deciphered and named. They do not depict a simple, clearly readable human shape or gesture. Instead, the sculptures open up a wide field of potential associations, which gives them their insistent and unique physical corporeality. William Tucker's sculptures have a presence that puts our own body in relation to them and thus heightens our awareness of it.

His engagement with the nature, structure and mass of the human body led Tucker to create a series of sculptures, for example Xanthe (1992) and Oedipus III (2014), which are determined more by their abstract shape than their immediately apparent form.

The imposing sculpture Frenhofer (1995) is one of the artist's largest torsos. Other pieces from this body of work are Pamona in the Tate London collection, Demeter in the collection of the Museum of Modern Art New York, and Eve in the Skulpturenpark Waldfrieden Wuppertal.

Originally modelled in plaster, Tucker cast his piece Tauromachy (2008) in bronze for the first time for this show. Tauromachy started as a fist, but it suggests a charging bull as in Goya's Tauromachy etchings. The immediate physical presence of the sculpture also gives it a tangible muscular strength.

"Tucker's sculpture asks fundamental questions as to what sculpture is and what it can be." (Joy Sleeman, The Sculpture of William Tucker, Lund Humphries, The Henry Moore Foundation, 2007)

Sculptures by William Tucker can be seen in several collections, including the Tate Gallery in London, the Guggenheim Museum, the Museum of Modern Art New York, the Metropolitan Museum New York, the Nasher Sculpture Center Dallas and the Art Gallery of New South Wales in Sydney.

The Museo de Bellas Artes in Bilbao will be presenting a major show of William Tucker's work from 9 June until 14 September.