For his third solo show Vincent Paronnaud, a.k.a. Winshluss, well known by comic book aficionados for a few cult publications and the prize for best comic book at Angouleme (Pinocchio, 2008), looks at the love-hate ambivalence. 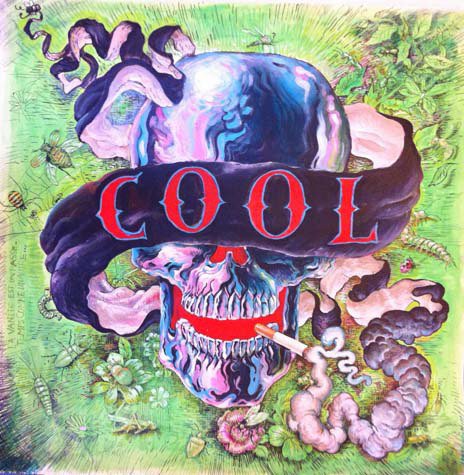 The topic he is more and more interested in, he says, is love. We are not sure we heard properly, we were rather expecting “death”. He explains: the couple. Domestic life, the one that often starts at Ikea, for the middle class. And where it also ends sometimes, as shows this post-apocalyptic vision of a store from the Swedish chain swallowed by a fantasy jungle, the parking lot now a cemetery for cars. Vision of defeat, yet also of an indecisive renewal, with tender pastel colours, and a similar composition to The Embarkation for Cythera by Watteau, but as if it had been dealt with by a Chinese painter from the last century.

For his third solo show at Galerie Georges-Philippe & Nathalie Vallois, Vincent Paronnaud, a.k.a. Winshluss, well known by comic book aficionados for a few cult publications and the prize for best comic book at Angoulême (Pinocchio, 2008), looks at the love-hate ambivalence. This duality is already embodied in a recurrent pattern from his work, which he likes to refer to: Robert Mitchum's two fists in the film The Night of the Hunter by Charles Laughton, one bearing the word “Love”, the other “Hate”. Winshluss usually only represents the “Love” fist in drawings or sculptures, separated from the body, like a mutilation. This time, he offers us both hands, which is probably worse, both 1:1 scale glued on a handrail, in a pale resin, like a 3D ghost, and installed at the height of the viewer's eyes. These cut fists find an echo in four paintings representing severed fingers surrounded by insects, perhaps the sign of a sexual frustration if we recall the Freudian use Buñuel made of hands in An Andalusian Dog… Small phalluses wandering around on their own, but still ready to punch. At times, the only thing left is the shape of the fingers, or the holes in which to squeeze them: like this rumpled beer can, Next, or the American fist also tattooed with “Love” and nicely entitled Dans ta gueule mon amour. Which shows that emptiness needs filling.

The materials and the manner in which he expresses this ambiguity recall the world of the Mexican calaveras, offerings in the shape of a skull often made out of sugar, a festive vision of the afterlife, and even a fertile one as the calavera is supposed to nourish the deceased. In Winshluss' works, it is not sugar but ceramic or porcelain, with the same flowers as the ones found in calaveras, but fallen at the feet of the object, forming a kind of crown from which springs the skull or the fist. Variations on the tattoo and “glory” aesthetics. Death, or indeed love, is the great common lot, the vanity. Winshluss sometimes talks about the mediocrity of life: even when we think we have succeeded, we actually have failed, in a way. Perhaps then, this consciousness of failure could be a superior degree of success… In any case, there is always resurrection, redemption, may it be crucified on a piece of wood from Ikea.

It is almost like the triumph of death, if we accept the double meaning of genitive, objective and subjective. Death triumphs, as in The man who killed the sun, cheering fake cinema poster, but it is also a triumph over death: after all, the artist (who has represented himself as a warrior) is stronger than the sun. Once fire has been stolen, he lights it under his diorama's characters from The Luncheon on the Grass, after Manet, which brings us back to the couple, except that it is a trio: Dostoïevski's The Eternal Husband read by René Girard? We are not on the grass, but below it (we can see the roots, not the dandelions), and we are far past lunchtime: the presuppositions implied by Manet are unveiled (prostitution, money) and the woman on the painting, the only one in the exhibition, is armed. She has already sorted the two men's cases out. We would readily see in this (semi-)victory the feminist key to the Winshlussian macabre dances. Eric Loret