Des Images d'Epinal aux Camouflages (1961-1963). On this occasion the gallery exhibits a set of exceptional works which most remained unseen for over 20 years, or even 50 years for the extraordinary installation Construction Game. 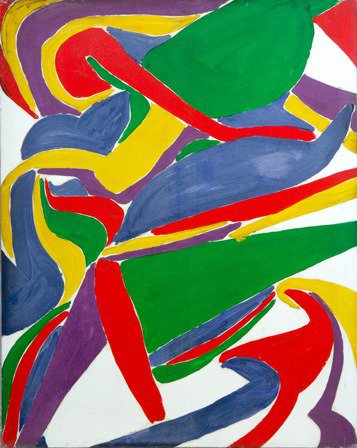 For the first exhibition of Alain Jacquet at the gallery GP & N Vallois – we now represent the artist’s estate through the Jacquet Committee – we have decided to focus on the years 1961-1963. This short period precedes the creation of the most iconic work of the artist, Le Déjeuner sur l’herbe; it was also the time when the artist set up his own vocabulary: permanent back and forth between abstraction and narration, Art History explorations and already the research for a “screen pattern” that reveals the image while blurring it.

On this occasion we will exhibit a set of exceptional works which most remained unseen for over twenty years, or even fifty years for the extraordinary installation Construction Game.

When Alain Jacquet, at the age of twenty-five years old, opened his first solo exhibition in New York at Alexander Iolas gallery – introduced by his friend Jean Tinguely -, this young artist had already accomplished an incredible renewal of painting. A set of works from his last series “Camouflages” deployed itself in the gallery along with a vast “fresco” installation titled Construction Game consisting of 21 three meters high cardboard tubes illuminated in gouache. This work echoed the Cylinders installation made for his first solo exhibition at the Breteau gallery in 1961.

Boldly, Jacquet undertook to revisit abstract painting from an intellectual posture both funny and cynical though rational, which he kept throughout his career.
Based on the homonymy of his name and the game of Jacquet (French version of the backgammon), he decided to limit his palette to the range of the six spectral colours of the prism, and his directory of forms to the triangles one finds on the game of Jacquet board. The following year, without abandoning these main principles, he added a new ingredient: the introduction of a narrative referent.

Despite their abstract appearance, the Images d’Épinal (1962) recall by their titles they were inspired by these small illuminated engravings popularised by peddlers in the 19th century. After several preparatory drawings, starting from an image and ending into a set of abstract forms, the result revealed itself in large canvases of shimmering colours.

“As Jacquet himself explained, the Camouflages come directly from this series: “The spirit of the Camouflage began in 1962 with the Images d’Épinal.” Some paintings (which reused Michelangelo’s Ignudi and Jonah from the Sistine Chapel, as well as La Joie de vivre by Matisse, and bits of drawings from Walt Disney, notably) still proceed by juxtaposing colours, albeit with the significant difference that the structure and certain details of these master paintings remain identifiable. And, as the palette has been enriched with new tones, the effect of fragmentation of the source image is manifest.

The “image d’Épinal” had, so to speak, every means of disappearing beneath the web of colours whereas, even if photographic reproduction has turned them into simple illustrations, the masterpieces of Michelangelo, Matisse, Bronzino or de Chirico put up a fight”.

“In the 1950s and 60s, abstract painting was subjected to a whole variety of strategies designed to steer it clear of the impasse of the idealism that had overseen its birth half a century earlier and give it a new topicality in a world that had very different concerns – above all, the image and the masses, and, ultimately, the mass of images (…)
To escape academicism without totally rejecting the modern project, and to innovate without resorting to either the illusion of progress or derision, this remit left precious little space for (self–) persuasion as to the genre’s relevance”. Alain Cueff

A book will be published on the occasion of the exhibition including two critical texts by
Anne Tronche and Alain Cueff, from which the above excerpts, and a foreword by Catherine Millet.