New Works and Selected Works from the 1970s. The exhibition features 22 new paintings created in the past year, many of which were done outside of mainland China, in Munich and Passau, Germany, as well as in Hokkaido, Japan. 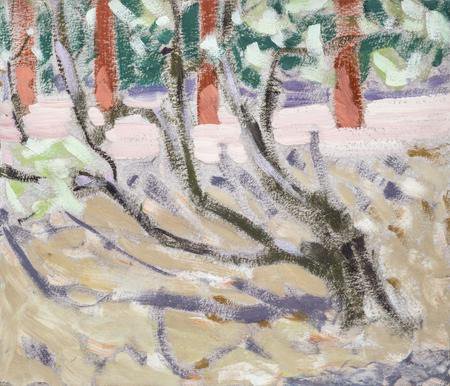 James Cohan Gallery Shanghai is pleased to present its second solo exhibition with the Beijing-based painter Li Shan. The exhibition opens on Monday, September 7th and continues through October 17, 2015. Coinciding with the upcoming week of exciting art events around Shanghai, including the West Bund Art & Design Fair, Yuz Museum, and numerous other events, there will be a special reception for the artist on Monday, September 7th from 5:00 to 8:00 pm.

The exhibition features twenty-two new paintings created in the past year, many of which were done outside of mainland China, in Munich and Passau, Germany, as well as in Hokkaido, Japan. Travel has played an integral role in Li Shan’s new works, from the casual European street-scenes such as Hutong in Passau or White Chapel, or in the visually brisk snowscapes like Morning at the Snow Field, and the mysterious night scene in Fallen Snow. Her paintings continue to speak of the artist’s personal journey and sense of place. Li believes, as she often says, “Each painting tells a story.”

Also on view will be a small selected group of twelve early works from the 1970s. Among them are the classic themes and subjects that have continued throughout her career, featuring lakeside views, shorelines, Chinese architecture and gardens, trees and flowers, as in Cloves, Golden Willow, Pagoda Tree Blossom and A Cozy Courtyard — subjects that the artist has returned to over many years. In keeping with her original Wuming Group (“No Name”) past and spirit, her paintings continue to be painted on portable-sized canvas boards or oil on paper. And, at first glance, they might seem wildly unfashionable or even anti-contemporary by today’s standards or present moment. However, Li Shan’s paintings remain vitally relevant in practice and in attitude. If “each painting tells a story,” as the artist asserts, it would seem also true that her paintings tell us about the unique, singular way in which Li Shan experiences and sees the world and, perhaps, how we too might stop to take a longer look around.

Li Shan (b. 1957) started painting in 1971. Her works have been widely exhibited and included in numerous museum exhibitions, including The “No Name” Group Retrospective Exhibition, Guangdong Museum of Art, Guangzhou and Shanghai Zhengda Museum of Modern Art, Shanghai, 2007; and The Art and China’s Revolution, Asia Society, New York, 2008, and are also in the permanent collections of Guangdong Museum of Art and Shanghai Zhengda Museum of Modern Art, as well as in distinguished private collections in Australia, Canada, China, Europe and the United States. Li Shan lives and works in Beijing and is an avid snowboarder.