Balthus was the reclusive painter of charged and disquieting narrative scenes, whose inspirative sources and embrace of exquisitely rigorous technique reach back to the early Renaissance, though with a subversive modern twist. 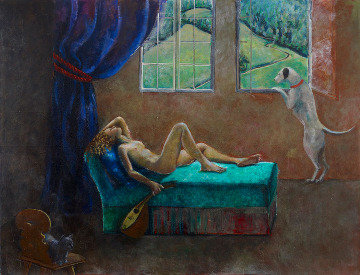 Following “Balthus: The Last Studies” at Gagosian New York (2013–14) and “Balthus” at Gagosian Paris (January–February 2015), Gagosian Hong Kong is pleased to announce a career-spanning exhibition of Balthus's paintings, drawings, and photographs. Prepared in collaboration with the artist's estate, this will be the first exhibition of his work in Hong Kong in twenty years.

Balthus was the reclusive painter of charged and disquieting narrative scenes, whose inspirative sources and embrace of exquisitely rigorous technique reach back to the early Renaissance, though with a subversive modern twist. Working independently of avant-garde movements such as Surrealism, he turned to antecedents including Piero della Francesca and Gustave Courbet, appropriating their techniques to represent the physical and psychic struggles of adolescence. Casting viewers as voyeurs of pubescent female subjects brooding with uneasy dreams, he scandalized Parisian audiences with his first gallery exhibition in 1934. In his interior portraits, street scenes, and landscapes of the next seventy years, Balthus cultivated a self-taught classicism as a framework for more enigmatic artistic investigations.

Early ink studies of Paris streets and passersby demonstrate the evolution of what Balthus described as his “timeless realism.” His signature dramatic lighting and muted palette are already evident in the oil paintings Portrait of Pierre Leyris (1932–33), a depiction of the young translator lighting a cigarette after dinner; and Young Girl in Amazonian Costume (1932), shown in his notorious debut at Galerie Pierre two years later. In the droll self-portrait The King of Cats (1935), featured in the Metropolitan Museum of Art's 2013–14 exhibition “Balthus: Cats and Girls,” the 27-year-old artist presents himself wearing a jacket and tie, a cat nuzzling his feet; a stone tablet leaning against a stool is inscribed “A PORTRAIT OF H.M. THE KING OF CATS painted by HIMSELF.” A 1947 study in oil on board for the key large-scale painting The Card Game (1948–50) portrays two girls in modern dress, but rendered with a geometrical order more typical of the Renaissance. Brimming with juxtaposed patterns, Le Rêve II (1956–57) finds Frédérique Tison, the stepdaughter of the artist's brother Pierre Klossowski, dreaming contently on a sofa as a second girl brings her a bright orange flower.

Balthus was appointed director of the French Academy in Rome in 1961, and acquired a medieval castle near Viterbo, an hour's drive north of the city, in 1970. In drawings and watercolors produced over the next several years, he continuously depicted the nearby ruins of a watchtower situated on a steep cliff over a densely wooded ravine, adjusting his palette with the seasons. In the last decade of his life, when physical frailty made it all but impossible for him to draw, he discovered the Polaroid camera—a surprising turn for one who had remained so defiantly aloof from many of the technical innovations of his own time. With it he began making extensive instant photographic "sketches" for his paintings, which were often many years in the making. During this time, his artistic energies and attention were reserved largely for his last model Anna. She posed for him every Wednesday for eight years in the same room with the same curtain, the same chaise longue, the same window in changing light conditions, the same bucolic mountain scenery looming beyond. This enduring scene provided the subject for his final painting, Girl with a Mandolin (2000–01), which remained unfinished at the time of his death.

A fully illustrated catalogue on Balthus's work, including a conversation between Setsuko Klossowska de Rola and Olivier Zahm, is forthcoming.

Balthus (Balthasar Klossowski de Rola) was born in Paris in 1908 and died in Rossinière, Switzerland in 2001. At the age of 13, he published Mitsou, a book of 40 ink drawings with a text by Rainer Maria Rilke, a close family friend. A self-taught artist, he held his first exhibition at Galerie Pierre, Paris in 1934. Following the ensuing scandal, he showed with Pierre Matisse Gallery, New York from 1938–77, although he never visited the U.S. His paintings and drawings are in the collections of key museum and private collections worldwide.

In 1961, Balthus became director of the French Academy in Rome. Over the next 16 years he restored the interior of the Villa Medici and its gardens to their former elegance. During his lifetime, he was also a noted stage designer for Shakespeare's As You Like It, Shelley's Cenci (as adapted by Antonin Artaud), Camus's État de siège and Mozart's Così fan tutte.