Psychoprosa. For the exhibition the artist propose his installations and 'molecular sculptures' based on chemical and biological processes that stand as symbols of social and psychic states of consciousness. 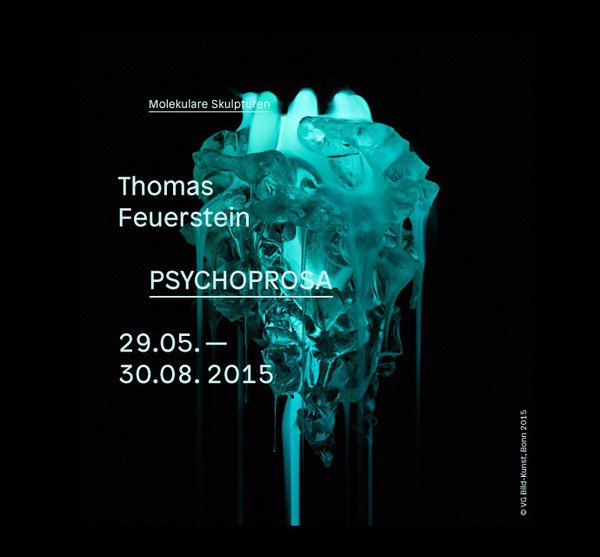 The Frankfurter Kunstverein presents the first major institutional solo exhibition in Germany of Austrian artist Thomas Feuerstein (*1968 in Innsbruck, lives in Vienna). His installations and "molecular sculptures" are based on chemical and biological processes that stand as symbols of social and psychic states of consciousness. They refer to current social and political issues such as the impact of biopolitics on the individual, the solution to global food problems, and the elimination of social boundaries. For the exhibition PSYCHOPROSA, the artist will develop an impressive installation for the Frankfurter Kunstverein that will extend throughout multiple rooms and floors.

The exhibition PSYCHOPROSA focuses on mucus as a biochemical substance and sculptural material. The production of mucus takes place as a real process within the exhibition spaces, transforming the Frankfurter Kunstverein into an interconnecting ensemble of greenhouse, laboratory, walk-in refrigerator, cinema, and factory. Through tubes connected to one another, equipment and objects produce and transform their interior substances, refrigerators open and close automatically and transparent threads of mucus drip from expansive glass sculptures.

In close collaboration with biochemists, Thomas Feuerstein has developed the synthetic molecule Psilamin, derived from algae and fungi. In its production, large quantities of viscous biofilm are generated. If one were to take Psilamin, one would begin to feel psychotropic effects. Perception would liquefy, and objects in the room would appear soft and shapeless. Simultaneously, the flowing nature of the sculptural matter, which escapes solid form, externalizes an inner psychic process. At the end of the biochemical production process, which visitors can track in the different exhibition spaces, there is the expansive sculpture Accademia dei Secreti over whose glass containers vast amounts of mucus pour.

Thomas Feuerstein views the exhibition as a narrative at the core of which lies a literary form in the tradition of science fiction. It is accompanied by lithographs and presented in the cinema room as a radio play together with the sculpture Sternenrotz. Across a dark room, the viewer sees a glowing sculpture in which a viscous, phosphorescent slime slowly drips like streaks and tears on a glass slide. In a steady creation and disappearance of shapes, the specific properties of the mucus as a moving sculptural material become clear. At the same time, the text raises questions of form and anti-form. The listener follows a discussion of researchers and bioactivists on the question of the evolutionary role of biofilm in a hypothetical "Mucus Age" in human history. Thomas Feuerstein recounts through his exhibition PSYCHOPROSA not only a story of matter as a living process and bearer of specific properties, but also of the social role of science in the modern age.

Through the exhibitionʼs title, PSYCHOPROSA, the artist further emphasizes the notion of subjectivity in the experience and perception of the world. The combination of the words "psycho" and "prose" refers to the narrative and subjective elements within art. The narrative PSYCHOPROSA can be read as an extension of western societyʼs Enlightenment and modernity based system of rational thought. At the same time, it encourages reflection on the idea of transgressing limits in terms of a possible counter-concept for the perception of the world.

A catalogue accompanies the exhibition, with texts in German and English by Beate Ermacora, Thomas Feuerstein, and Jürgen Tabor, as well as a conversation between Graham Harman and Thomas Feuerstein; 240 pages, with numerous colour illustrations; Snoeck Verlag, Cologne 2015. The exhibition is a collaboration with the Galerie im Taxispalais, Innsbruck, and the Kunstverein Heilbronn, and was made possible through kind support from Hessische Kulturstiftung, the Hessen State Ministry of Higher Education, Research and the Arts, the Federal Chancellery of Austria in Vienna, the Province of the Tyrol, the Austrian Cultural Forum in Berlin, Merck KGaA, ORF Kunstradio, Rehau AG + Co and allbuyone GmbH.