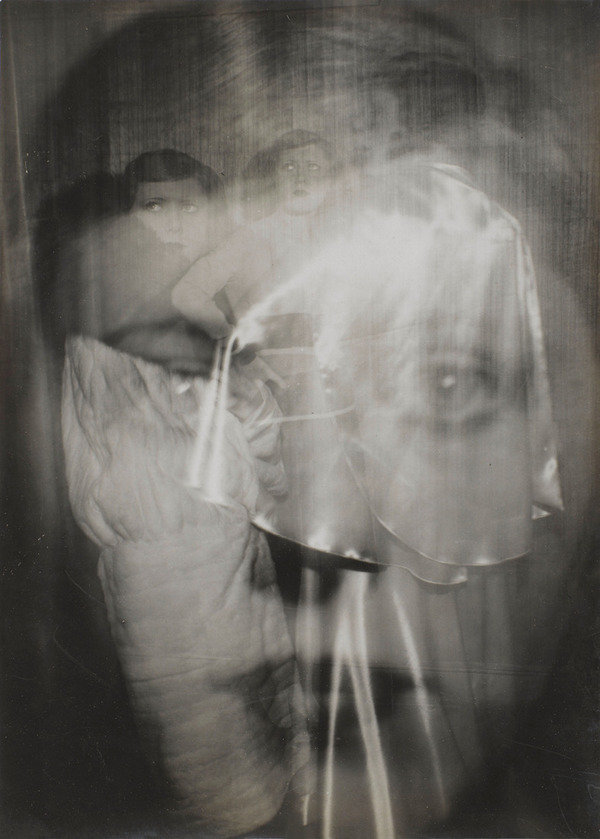 Germaine Krull (Wilda-Poznań, East Prussia [after 1919: Poland], 1897-Wetzlar, Germany, 1985) is at once one of the best-known figures in the history of photography, by virtue of her role in the avant-garde's from 1920 to 1940, and a pioneer of modern photojournalism. She was also the first to publish in book form as an end in itself.

The exhibition at Jeu de Paume revisits Germaine Krull’s work in a new way, based on collections that have only recently been made available, in order to show the balance between a modernist artistic vision and an innovative role in print media, illustration and documentation. As she herself put it – paradoxically, in the introduction to her Études de nu (1930) –, ‘The true photographer is the witness of each day’s events, a reporter.’

If Krull is one of the most famous women photographers, her work has been little studied in comparison to that of her contemporaries Man Ray, László Moholy-Nagy and André Kertész. Nor has she had many exhibitions: in 1967, a first evocation was put on at the Musée du Cinéma in Paris, then came the Rheinisches Landesmuseum, Bonn, in 1977, the Musée Réattu, Arles, in 1988, and the 1999 retrospective based on the archives placed at the Folkwang Museum, Essen.

The exhibition at Jeu de Paume focuses on the Parisian period, 1926-1935, and more precisely on the years of intensive activity between 1928 and 1933, by relating 130 vintage prints to period documents, including the magazines and books in which Krull played such a unique and prominent role. This presentation gives an idea of the constants that run through her work while also bringing out her aesthetic innovations. The show features many singular but also representative images from her prolific output, putting them in their original context.

Born in East Prussia (later Poland) to German parents, Krull had a chaotic childhood, as her hapless father, an engineer, travelled in search of work. This included a spell in Paris in 1906. After studying photography in Munich, Krull became involved in the political upheavals of post-war Germany in 1919, her role in the communist movement leading to a close shave with the Bolsheviks in Moscow. Having made some remarkable photographs of nudes during her early career, noteworthy for their freedom of tone and subject, in 1925 she was in the Netherlands, where she was fascinated by the metal structures and cranes in the docks, and embarked on a series of photographs that, following her move to Paris, would bear fruit in the portfolio Métal, publication of which placed her at the forefront of the avant-garde, the Nouvelle Vision in photography. Her new-found status earned her a prominent position on the new photographic magazine VU, created in 1928, where, along with André Kertész and Eli Lotar, she developed a new form of reportage that was particularly congenial to her, affording freedom of expression and freedom from taboos as well as closeness to the subject – all facilitated by her small-format (6 x 9 cm) Icarette camera.

This exhibition shows the extraordinary blossoming of Krull’s unique vision in around 1930, a vision that is hard to define because it adapted to its subjects with a mixture of charisma and empathy, while remaining constantly innovative in terms of its aesthetic. It is essential, here, to show that Krull always worked for publication: apart from the modernist VU, where she was a contributor from 1928 to 1933, she produced reportage for many other magazines, such as Jazz, Variétés, Art et Médecine and L’Art vivant. Most importantly, and unlike any other photographer of her generation, she published a number of books and portfolios as sole author: Métal (1928), 100 x Paris (1929), Études de nu (1930), Le Valois (1930), La Route Paris-Biarritz (1931), Marseille (1935). She also created the first photo-novel, La Folle d’Itteville (1931), in collaboration with Georges Simenon. These various publications represent a total of some five hundred photographs. Krull also contributed to some important collective books, particularly on the subject of Paris: Paris, 1928; Visages de Paris, 1930; Paris under 4 Arstider, 1930; La Route Paris-Méditerranée, 1931. Her images are often disconcerting, atypical and utterly free of standardisation.

An energetic figure with strong left-wing convictions and a great traveller, Krull’s approach to photography was antithetical to the aesthetically led, interpretative practice of the Bauhaus or Surrealists. During the Second World War, she joined the Free French (1941) and served the cause with her camera, later following the Battle of Alsace (her photographs of which were made into a book). Shortly afterwards she left Europe for Southeast Asia, becoming director of the Oriental Hotel in Bangkok, which she helped turn into a renowned establishment, and then moving on to India where, having converted to Buddhism, she served the community of Tibetan exiles near Dehra-Dun.

During all her years in Asia, Krull continued to take photographs. Her thousands of images included Buddhist sites and monuments, some of them taken as illustrations for a book planned by her friend André Malraux. The conception of the books she published throughout her life was unfailingly original: Ballets de Monte-Carlo (1937); Uma Cidade Antiga do Brasil; Ouro Preto (1943); Chieng Mai (c. 1960); Tibetans in India (1968).

In her photojournalism, Krull began by focusing on the lower reaches of Parisian life, its modest, working population, the outcasts and marginal of the “Zone,” the tramps (subject of a hugely successful piece in VU), Les Halles and the markets, the fairgrounds evoked by Francis Carco and Pierre Mac Orlan (her greatest champion). The exhibition also explores unchanging aspects of her tastes and attachments: the love of cars and road trips, the interest in women (whether writers or workers), the fascination with hands, and the free, maverick spirit that drove her work and kept her outside schools and sects.
The works come from a public and private collections including the Folkwang Museum, Essen; Amsab, Institute for Social History, Ghent; the Ann and Jürgen Wilde Foundation, Pinakothek der Moderne, Munich; The Museum of Modern Art (MoMA), New York; the Centre Pompidou, Musée National d’Art Moderne, Paris; the Bibliothèque Nationale de France, Paris; the Collection Bouqueret-Rémy; the Dietmar Siegert Collection.

Valérie Jouve's photographic and film work is rooted in the alchemy between bodies and space, humanity and the urban landscape. Titled "bodies, Resisting", this exhibition offers a substantial selection of works from the late 1980s up to the present day.

Born in Saint Etienne in 1964 and now living in Paris, Valérie Jouve studied anthropology before enrolling at the National School of Photography in Arles. Now a photographer and filmmaker, she is part of that generation of French artists which has moved away from the great humanist tradition without completely rejecting its fundamental concerns.
Her photographs and films draw as much on contemporary art and creative documentary as on anthropology and sociology. In their combined portrayal of people in motion and buildings, they explore physical presence in cities and ways of living in space. The classic subjects of landscape and portrait are brought together in a way that draws splendidly choreographed scenes out of the intensity of urban situations.

The ambiguity and deliberate indeterminacy of her photographic compositions is underscored by her use of the designation Untitled. These open-ended bodies of images are added to by the artist over time, and each is identified by a generic subtitle in parentheses: Characters, Facades, Passers-by, The Street, Situations, Trees, and so on.
The Jeu de Paume selection covers more than twenty years of Jouve's work. The exhibition itinerary sets up a tension between these still images and a series of films looking at the city and its margins, ranging from Grand Littoral and Traversée to the artist's new work, Blues. Created especially for the exhibition, Blues speaks to us of the abuse of power by countries and people. Jouve went to Guatemala to film and photograph changes to the landscape induced by the practices of those the local Indians call gringos. Comprising sequences of films, photographs, texts and sounds, the work revolves around Tania Carl, a French blues singer who has opted for living in Guatemala.
Jouve has approached the presentation of "Bodies, Resisting" as if it were a musical composition, imbued with a momentum that makes the viewer a participant.

I'm trying to conjure up a kind of intensity I feel in living things... I'm working on inhabiting a space and I hope viewers come to experience that space through the images. (Valérie Jouve)

The bodies in Jouve's images are dwelt in by the space they traverse, sometimes being rendered machine-like by the repetition of everyday acts. Situations, Itineraries and Leaving the Office illustrate the mechanics of bodies moving from an interior to a public space.

The artist's eye calls up a powerful resistance to the impersonal norms of the territory in question, of these nameless subjects silently given names by the voice dwelling in the images. (Marie-José Mondzain)

In Valérie Jouve's work urban and periurban spaces are built-up, leaving no room for earth. Some of her images are of implacably geometrical generic sites, while others show human beings on a human scale, as an active force within the city and a call to action.

Because she feels living beings as disconnected from an all-absorbing, not to say stifling, reality… Most of these figures – these men and women – abruptly break into the deep flow of the exhibition... Her explorations take place on the side of resistance, strength and presence – of what she calls "being there"... She urges us towards a "shift" away from our habits and perceptions – and our resignation. (Arlette Farge)

Following on from Khvay Samnang’s previous works such as Untitled (2011), and Where is my Land? (wit h Nget Rady) (2014), Rubber Man (2015) confronts a contested landscape with poetic resistance.
For over one year, Khvay Samnang repeatedly returned to Rattanakiri, Cambodia’s northeastern highland province, to survey the altered environment—from the remaining villages to the strategic clearings, from rubber tree saplings to mature plantations.
His three-channel video installation frames these landscapes, in which the artist pours fresh liquid rubber over his body, then sets about walki ng in and out of the rati onal cash crop lines, as if a lost specter.
As the forests disappear, Khvay Samnang asks, "Where will the spirits live?

For Khvay’s Satellite 8 commission Rubber Man (2015), the artist responds to the specific colonial legacy of land use. French Indochina privatized the Khmer monarchy’s land 131 years ago, in 1884. Soon after, rubber seeds arrived, imported from Brazil. And soon after that, the French imported an economic equation that began the physical, conceptual and spiritual transformation of Cambodia’s nature into exploitable land. Cambodia’s first land concession was established in 1922 for a rubber plantation, which, until 1975, was the largest in the world.

The Khmer language transliterates the French transliteration, caoutchouc, of an indigenous South American word for rubber. Referred to as the “crying tree”, its latex tears drop after the tapping incision. Perhaps the most biting reference for the word rubber is as it applies to today’s intensification of the colonial concession project in Cambodia’s indigenous forests and culture: scraping away, erasing.

There are more than 20 different highland indigenous groups in Cambodia who have distinctly different cultures, languages and histories from those of the lowland Khmer population. Resident forest and ancestor spirits play a critical and omnipresent role in everyday life, which follows an elaborate subsistence cycle of planting, transplanting, harvesting, and regeneration. Threatened by multiple colonialisms, many communities in this area have been able to resist the effects of state formations that have developed over the last century in Cambodia. And their spiritual beliefs have effectively ensured forest and wildlife conservation. However, land concessions and agribusiness that favor the economic powers of today – from individuals to governments to multinationals – seem the strongest threat to their time immemorial culture.