The Art and Legacy of Fela Anikulapo-Kuti. A group exhibition exploring the cultural impact of the famous Nigerian musician and activist who died in 1997. Thirty-four international artists will examine and respond to this cultural icon through approximately forty works of painting, drawing, sculpture, photography, mixed media and sound installation, video, film, computer animation, and music 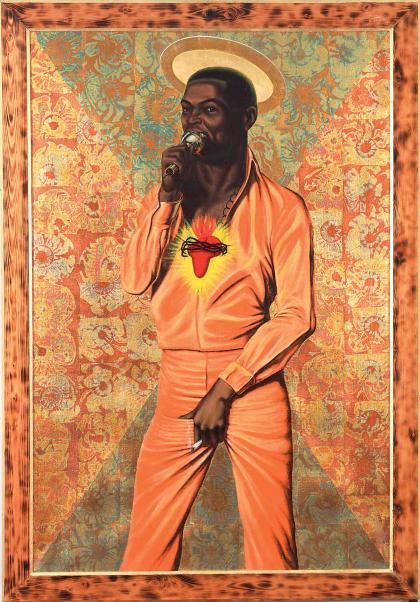 The Art and Legacy of Fela Anikulapo-Kuti

erba Buena Center for the Arts presents Black President: The Art and Legacy of Fela Anikulapo-Kuti, a group exhibition exploring the cultural impact of the famous Nigerian musician and activist who died in 1997. Thirty-four artists will examine and respond to this cultural icon through approximately forty works of painting, drawing, sculpture, photography, mixed media and sound installation, video, film, computer animation, and music. Black President is organized by the New Museum of Contemporary Art in New York City.

Musician and activist Fela Anikulapo-Kuti created Afrobeat, the infectious fusion of American funk and jazz with traditional Yoruba and highlife music. Through politically-charged lyrics, electrifying stage performances, and his counter-culture lifestyle, Fela Kuti preached against social injustice and corruption. Troubled by the political and economic corruption of Nigeria and the repressive governments of sub-Saharan Africa, Fela built a commune called the Kalakuta Republic, which he declared immune from Nigerian law, and created his own political party. At the height of his popularity in the mid-1970s, Fela took to calling himself the Black President. Since his death in 1997 from an AIDS-related illness, Felaâ€™s status as a pan-African icon has continued to grow.

Black President is a critical multimedia exploration of the influence and artistic legacy of Fela Kuti. Artists included in this exhibition come from countries as diverse as Burundi, Cameroon, Chile, CÃ´te dâ€™Ivoire, England, Germany, Ghana, Kenya, Nigeria, South Africa, and the United States. Some, like album cover artist, Ghariokwu Lemi, and photographer, Femi Osunla, were part of Felaâ€™s artistic retinue in Lagos. Other younger participating artists were not yet born. Their work speaks to the many sides of Fela as musical pioneer, political dissident, utopian visionary, consummate showman, husband to 28 women, and legendary lover.

Several artists have contributed new works for this exhibition, including the following:

In The Afronomical Ways, Sanford Biggers (b. 1961 Los Angeles; lives in New York) creates a new zodiac system that reads as an afro-tantric sexual guide, complete with twelve sexual positions. The Afronomical Ways introduces Fela as a man of both sexual and spiritual prowess.

In a collaborative work, Golddigger, Klaus BÃ¼rgel (b. Radofzell, Germany; Lives Portland, ME) has transformed drawings by Kara Walker (b. 1969 Stockton, California; lives in New York) of bondage and slavery motifs, such as handcuffs, collars, and traps, into three-dimensional gold and jewel-encrusted objects. Tiny and precious, they strike a strange mixture of traditional West African lost wax casting, Akan gold weights, and todayâ€™s objects of bling bling urban abundance.

Satch Hoyt (b. 1957 London; lives in New York) invites the viewer to step into a sound capsule in his installation, The Shrine (The 27 Brides of the Black President), named after Felaâ€™s nightclub in Lagos. The exterior of the capsule is covered in red fabric that evokes the richness of Felaâ€™s costumes. Inside the capsule, Felaâ€™s music mixes with the ambient noises of African cities and womenâ€™s voices, and with hand-drawn iconic images of Felaâ€™s twenty-seven queens.

Marcia Kureâ€™s (b. 1970, Nigeria; lives in Atlanta, GA) History of Africa by Fela features fifty-nine panels, one for each year of Felaâ€™s life, including his final abbreviated year. Each panel is delicately painted with pigment from the kola nut, a substance used in Africa as both a dye and a friendship offering. Featuring distorted humanoid and animal figures, Kureâ€™s paintings suggest that Felaâ€™s history, as much as the history of Africa itself, is a confluence of the mythological and the real.

Wangechi Mutu (b. 1972 Nairobi, Kenya; lives in New York) provides a feminist critique of Felaâ€™s problematic relationships with women while at the same time acknowledging a respect and admiration for his courageous politics. Mutu combines the critical and the humorous in her painting, Yo Mama, which portrays a woman stabbing a serpent with her spiked heels.

Roberto Visani (b. 1970, Faenza, Italy; lives in New York) sculpts guns out of discarded materials that include crutches, scrap metal, crack vials, and brass instruments-collected from New Yorkâ€™s predominantly black neighborhoods of Harlem and Bedford Stuyvesant, and of the cities and towns in Ghana where Fela performed. For Visani, the gun carries associations as a tool of colonial domination, a weapon of contemporary urban destruction, and a unit of exchange for African slaves.

Fred Wilson (b. 1954 New York; lives in New York) strives to expose underlying cultural assumptions about race and ethnicity in his work. Because Why O? is a new piece that combines traditional Nigerian pottery with a sound installation of Felaâ€™s music.

A special music room, co-curated by Piotr Orlov, will provide a selection of music from the 1950s to the present as a context for the cultural and political environment in which Felaâ€™s Afrobeat was created and developed. Starting with West African highlife music as his base, Fela synthesized the funky soul of James Brown and the compositional complexity of American and Afro-Cuban jazz with Yoruba percussion and call-and-response singing to form a new genre he called Afrobeat. The music room will bring to light Afrobeatâ€™s earliest influences, its context within the global community of the â€˜70s and â€˜80s, focusing on the African Diaspora and other affected funk, rock and jazz musicians, as well as its legacy in modern music. Featured artists will include E.T. Mensah, John Coltrane, Hugh Masekela, Roy Ayers, Tony Allen, King Sunny Ade, Tom Tom Club, Femi Kuti and Masters at Work.

Born Olufela Olusegun Oludotun Ransome-Kuti in Nigeria in 1938, Fela studied classical music at the Trinity College of Music in London. There, in the early 1960s, he founded his first band, Koola Lobitos. While on a tour of the US in 1969, Fela was introduced to the Black Power movement and to the teachings of thinkers such as Malcolm X and Angela Davis. Inspired by this trip, Fela created Afrobeat, combining a hard-edge and unyielding political content with a masterful orchestration of African percussive systems and his signature saxophone sound. When he returned to his homeland he opened a nightclub, the Shrine, and changed the name of his band to Africa 70 (and later to Egypt 80).

Fela lived and produced his music under persistent state persecution. His criticism of state corruption and repression led to several raids on his commune, the Kalakuta Republic, and to numerous detentions and jail terms. In 1977, soldiers set fire to Kalakuta and viciously attacked the occupants. Kuti suffered a fractured skull, arm, and leg, while his 77-year-old mother was thrown out of a window. She died a little over a year later.

Following this incident, Fela went into exile in Ghana, but was deported back to Lagos the following year. On arrival, to mark the anniversary of the previous yearâ€™s pillage of Kalakuta and to reaffirm his embrace of Yoruba culture, Fela married 27 women in a traditional ceremony. In 1975, Fela replaced the Ransome in his name with Anikulapo, meaning ''he who carries death in his pouch'' (or ''he who defies death''). In August 1997, Fela died of heart failure due to AIDS-related complications at the age of 58. During his lifetime, he recorded over 70 albums.

Black President is accompanied by a fully-illustrated 186-page exhibition catalog with scholarship about the life and legacy of Fela Kuti. Black President: The Art and Legacy of Fela Anikulapo-Kuti was organized by the New Museum of Contemporary Art, New York and is made possible by the generous support of the Toby Devan Lewis Fund for Exhibitions of Emerging Artists. The exhibition at YBCA was made possible in part by a grant from the LEF Foundation.