The exhibition moves back and forth between political and private, public space, the domestic and the unconscious, exploring themes such as instability, tension and explosion, masks, encryption and the strange. The show runs counter to the romantic vision of Buenos Aires. 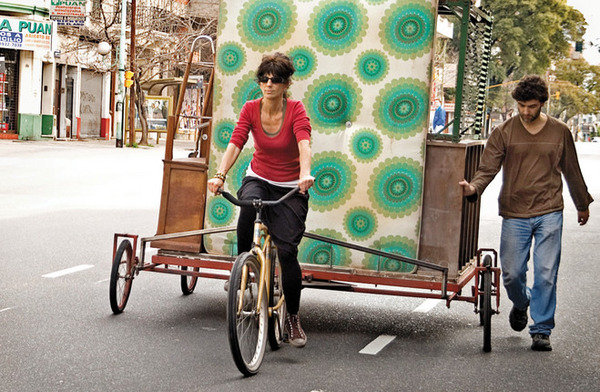 My Buenos Aires at la maison rouge continues a series of exhibitions that showcases the art scene in cities worldwide. The series was launched in summer 2011 with Winnipeg, Canada, followed in 2013 by Johannesburg, South Africa. Some regret what they see as a “standardized” art world, laying the blame at globalization’s door, and so this seemed the opportune moment to look at centres of creativity which, though out of the spotlight, enjoy a thriving art scene of works infused with the city, its territory, history and myths.

My Buenos Aires runs counter to the romantic vision of Buenos Aires. Paula Aisemberg and Albertine de Galbert seek to offer visitors to la maison rouge neither a portrait of the city nor a “who’s who” of Argentinean artists, but rather a sensation, an experience of the dynamics at work in the Argentine capital.

The exhibition moves back and forth between political and private, public space, the domestic and the unconscious, exploring themes such as instability, tension and explosion, masks, encryption and the strange.

Along their way, visitors will encounter remnants of facades, mutant scaffoldings, car bonnets, motorway junctions, burned-out houses and headless statues. They will decipher coded languages to the gentle sway of the music rising from the city and the whir of fans. When night falls, they can settle onto an old sofa and listen to a raspy tango, pick their way through the patchedup ruins of a kitchen that’s acting as though nothing was wrong, or study their reflection in the black ink of a white marble basin. They will sink into a waking dream inhabited by strangely unnerving doubles and faceless people falling from the sky, only to wake in the muffled folds of a stucco wedding cake.

With more than sixty artists working in all media, from installation to painting, sculpture, video and photography, four generations are represented.

Established names such as León Ferrari, Guillermo Kuitca or Jorge Macchi will join others to be discovered. More than 15 of them will travel to Paris to work on in situ installations.

My Buenos Aires is an invitation to plunge into the mystery of Buenos Aires without attempting to resolve it, and to experience the unsettling strangeness of its multiple personalities.