Floris Neususs presents 'Dreams & Photograms' the iconic nudograms from the 1960s and 70s that were made by exposing the human figure directly onto photographic paper. Antonio Murado presents new paintings treated with delicate, transparent layers of oil and turpentine that underwrite pools of paint. 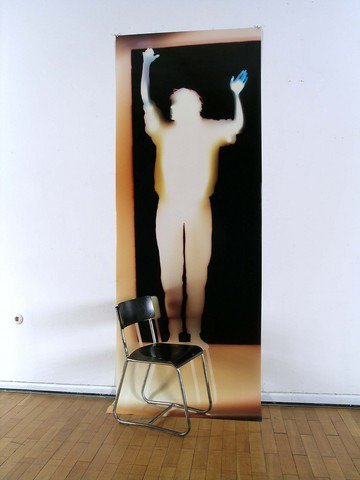 Von Lintel Gallery is pleased to present work from acclaimed German photogram artist, Floris Neusüss. A pioneer of experimental photography since 1958, Neusüss has devoted his entire career to the rigorous study, practice and teaching of the photogram technique.

Analog methods are experiencing a wave of resurgence as contemporary artists mine history to investigate the possibilities of photographic materials. Neusüss is recognized as part of the photogram vanguard along with predecessors Man Ray and Lázló Maholy-Nagy. His work has been included in major experimental photography exhibitions at the Victoria & Albert Museum in London, the Sprengel Museum in Hannover, Germany, the Museum of Fine Arts Houston and the International Center of Photography in New York among others.

The Von Lintel Gallery exhibition features the artist’s iconic nudograms—Körperbilder—from the 1960s and 70s that were made by exposing the human figure directly onto photographic paper. The proximity of the model to the paper influenced the sharpness of the contours and the amount of light dispensed affected the intensity of the tones. Movement—either accidental or intentional—dissolved and fractured the silhouettes into transcendent forms removed from any sense of time or place. Despite the subject’s absence, a palpable intimacy—or, presence—is felt. Such is the magic of a photogram.

A similar phenomena transpired when Neusüss applied the photogram to portraiture. He and Robert Heinecken were friends and collaborators. The Getty Museum owns Dinner for Heinecken—a Neusüss photogram exposed during a dinner that used light-sensitive paper in lieu of a table cloth. During another work session, Floris exposed Heinecken’s full body on profile. The work— included in the show—does not reveal any surface details and yet the expressive body language and attitude of the subject is uncannily recognizable. As Neusüss says, “If you knew Robert Heinecken, when you look at his portrait photogram, you automatically feel close to him.”

Also on view are early gelatin silver prints from late 1950s while still a student in Munich; an innovative piece from the 1980s that merged a photogram with sculpture; and Nachtbilder: a series produced by placing photo paper emulsion side down into a woodland or garden at night. At times created during a thunderstorm, lightning would expose the paper from all directions, catching gusts of impressions from below and above. A sense of movement and chaos transformed the familiar into something much more arresting; an aesthetic echoed throughout Neusüss’ career.

Floris Neusüss was born in 1937 in Remscheid Lennep, Germany. He has exhibited internationally for over fifty years and his work is included in numerous public collections including the Museum of Modern Art, New York; the J. Paul Getty Museum, Los Angeles, the Victoria and Albert Museum, London, the Art Institute of Chicago and the Museum of Fine Arts, Houston. His work has been published in several monographs and he was a subject of an expansive illustrated volume produced in conjunction with a 2010-11 Victoria and Albert exhibition on the work of five camera-less photographers. He was an influential teacher in Germany and recently retired as Professor in Experimental Photography at the University of Kassel, a post he had held since 1971. Neusüss lives and works in Kassel, Germany with his partner Renate Heyne

Murado is a technical virtuoso who returns to familiar motifs to continue experimenting with the capacity of paint to express the realities of nature. Whereas many artists lament the mind’s habitual reflex to interpret a horizontal piece as a landscape, Murado embraces it. His work hinges upon illusion as he conjures forms without actually rendering them. From a distance, latitudinal swipes of rusted orange or chartreuse green anchor apparent twinkling cityscapes or mountain ranges. But in actuality, the works are deft striations of pigment impressed with textural patterns.

Similarly, material investigation and process reinvigorate traditional conceits of still life. Canvases are treated with delicate, transparent layers of oil and turpentine that underwrite pools of paint, blown with air. The shapes may mimic flower petals floating in mid-air or across a flow of water, but it is gesture that reigns here over figuration.

“The results of these experiments in alchemical materiality is a variegated series of paintings that, with infinite nuance, convey Murado’s own plastic versions of the different domains of the life of nature.” — Alexandre Melo, ArtForum.

Murado was born in Lugo, Spain in 1964 and graduated from the University of Salamanca. Shown internationally in multiple solo and group exhibitions around the world, Murado’s paintings are now held in prominent museum, corporate, and private collections including The Galician Center of Contemporary Art, Santiago de Compostela, Spain; The Museum of Fine Art, Vitoria, Spain; The Nagasaki Art Museum, Japan; and in the collections of Phillip Morris, American Express, Chase Manhattan Bank, AXA, Pfizer, and The Coca-Cola Corporation.