The EY Exhibition. From her early figurative painting in the 1900s to her energetic abstract work in the 1960s. The exhibition shows how the artist dedicated her life to experimenting with colour and abstraction, bringing her ideas off the canvas and into the world through tapestry, textiles, mosaic and fashion. 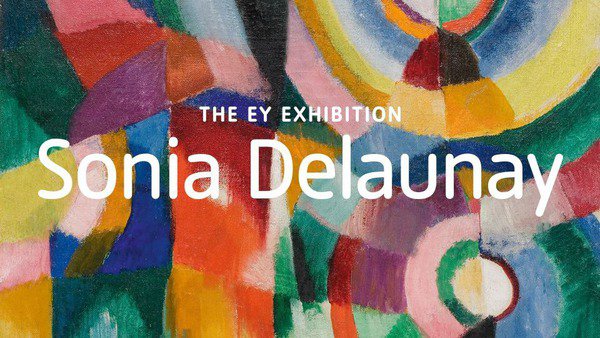 Sonia Delaunay (1885–1979) was a key figure in the Parisian avant-garde, whose vivid and colourful work spanned painting, fashion and design. Tate Modern presents the first UK retrospective to assess the breadth of her vibrant artistic career, from her early figurative painting in the 1900s to her energetic abstract work in the 1960s. This exhibition offers a radical reassessment of Delaunay’s importance as an artist, showcasing her originality and creativity across the twentieth century.

Born in Odessaand trained in Germany, Sonia Delaunay (née Stern, then Terk) came to Parisin 1906 to join the emerging avant-garde. She met and married the artist Robert Delaunay, with whom she developed ‘Simultaneism’ – abstract compositions of dynamic contrasting colours and shapes. Many iconic examples of these works are brought together at Tate Modern, including Bal Bullier 1913 and Electric Prisms 1914. Her work expressed the energy of modern urban life, celebrating the birth of electric street lighting and the excitement of contemporary ballets and ballrooms.

The EY Exhibition: Sonia Delaunay shows how the artist dedicated her life to experimenting with colour and abstraction, bringing her ideas off the canvas and into the world through tapestry, textiles, mosaic and fashion. Delaunay premiered her first ‘simultaneous dress’ of bright patchwork colours in 1913 and opened a boutique inMadrid in 1918. Her Atelier Simultané inParis went on to produce radical and progressive designs for scarves, umbrellas, hats, shoes and swimming costumes throughout the 1920s and 1930s. Clients included the Hollywood star Gloria Swanson and the architect Erno Goldfinger, as well department stores like Metz & Co and Liberty. The exhibition reveals how Delaunay’s designs presented her as a progressive woman synonymous with modernity: embroidering poetry onto fabric, turning her apartment into a three-dimensional collage, and creating daring costumes for Diaghilev’s Ballets Russes.

The diverse inspirations behind Delaunay’s work are also explored, from the highly personal approach to colour which harked back to her childhood in Russia, to the impact of her years in Spain and Portugal where she painted The Orange Seller 1915 and Flamenco Singers 1915-16. The show also reveals the inspiration provided by modern technology throughout Delaunay’s career, from the Trans-Siberian Railway to the aeroplane, and from the Eiffel Tower to the electric light bulb. It also includes her vast seven-metre murals Motor, Dashboard and Propeller, created for the 1937 International Exposition in Paris and never before shown in the UK.

Following her husband’s death in 1941, Sonia Delaunay’s work took on more formal freedom, including rhythmic compositions in angular forms and harlequin colours, which in turn inspired geometric tapestries, carpets and mosaics. Delaunay continued to experiment with abstraction in the post-war era, just as she had done since its birth in the 1910s, becoming a champion for a new generation of artists and an inspiring figure for creative practitioners to this day.

The EY Exhibition: Sonia Delaunay is part of the three-year arts partnership between EY and Tate. This follows The EY Exhibition: Paul Klee – Making Visible which ran at Tate Modern from14 October 2013to9 March 2014and The EY Exhibition: Late Turner – Painting Set Free which runs at TateBritainfrom10 September 2014to25 January 2015. The partnership helps Tate to realise its ambitious arts programme across Tate Modern and TateBritain, with EY’s support being extended through corporate memberships at Tate Liverpool, Tate St Ives and at many of the Plus Tate partners around the country. The partnership, announced in July 2013 makes EY one of the largest corporate supporters of Tate.

Martin Cook, Managing Partner Commercial,UK&Irelandat EY, said:
“Delaunay was a pioneer of colour and abstraction and an important figure in 20th century art. We are delighted that The EY Exhibition: Sonia Delaunay is part of the arts partnership between EY and Tate. This unique relationship is an example of how EY teams with other organisations that share our commitment to diverse perspectives and creating inclusive cultures and thus contributes to our purpose of building a better working world.”