Figurative Painting in West Germany. With 90 works by altogether 27 artists, the show will illuminate the novel, disconcerting and enormously dynamic approach to figurative painting that developed in the 1980s. 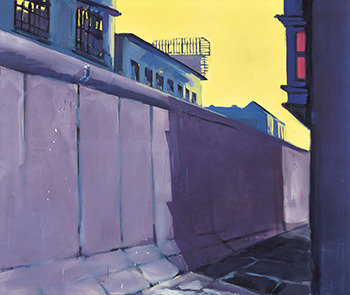 From 22 July to 18 October 2015, the Städel Museum will be presenting The 80s. Figurative Painting in West Germany in a major special exhibition. With 90 works by altogether 27 artists, the show will illuminate the novel, disconcerting and enormously dynamic approach to figurative painting that developed in the 1980s almost simultaneously in Berlin, Hamburg and the Rhineland. Works by Ina Barfuss, Werner Büttner, Walter Dahn, Jiří Georg Dokoupil, Rainer Fetting, Georg Herold, Martin Kippenberger, Helmut Middendorf, Christa Näher, Albert Oehlen, Salomé, Andreas Schulze and many others will be on view. The exhibition will shed light on the West German art centres—for example, Moritzplatz in Berlin or Mülheimer Freiheit in Cologne—while at the same time providing insights into the figurative painting of those years in all its complexity and diversity.

The artists who turned the art world topsy-turvy with unbridled intensity and a fast, painterly tempo in the years around 1980 produced figurative paintings that ventured a critical examination of the tradition of painting, the post-war avant-gardes and their own immediate present. They drew their themes primarily from their surroundings. As a result, the established art scene became as much a subject of their works as homosexual emancipation and the intoxicating pace of the international club and music world conveyed by New Wave and Punk from the mid-'70s onward. The protagonists of the time were nevertheless anything but a homogeneous painterly movement. On the contrary, the painting of a decade demarcated by student revolts on one end and a reunified Germany on the other is distinguished by a multi-faceted and often contradictory coexistence of various currents, influences and sensitivities. With its specific focus on post-1945 painting, the Städel Museum's collection of contemporary art offers an ideal framework for the presentation of this eventful decade.

"With this exhibition, the Städel is unearthing a vast treasure chest of paintings that have been viewed through the spectacles of traditional clichés for too long—works that belong to our collective pictorial memory on the one hand, but can well stand to be reassessed and perceived anew in their painterly potency and conceptual complexity on the other," observes Städel Museum director Max Hollein.

The contemporary, historicizing perspective on this indisputably complex aesthetic phenomenon offers a means of discerning structural similarities and testing new art historical approaches and inquiries without overlooking the diversity of the art it produced. Without negating the originality and diversity of these paintings, the show will pose the question as to where this painting came from, what stance it takes on its own tradition in the so-called "Postmodern" environment, and what role it might play for the present through a new or more discerning localization in its own time. "What we are dealing with here is a generation of artists who, in a clearly defined period, triggered a tremendously controversial response with the sheer vehemence of their presence and the novelty of their painting. At the same time, to this day there is no coherent narrative that meaningfully links these paintings with what came before and what came after. This complex set of circumstances makes it necessary to characterize—from the art historical and museological points of view—the significance of these paintings for the subsequent generation of artists as well as their relationship to their own tradition," comments Dr Martin Engler, head of the Städel's collection of contemporary art and curator of the exhibition.