Eames-Derivative, (small version). The artist's mixed media installations explore the effects of cultural diplomacy and governments' propaganda strategies. Drawing from a multitude of sources, the artist embarks on a kind of derive mapped onto a global scale to tease out entangled public secrets and recontextualize them. 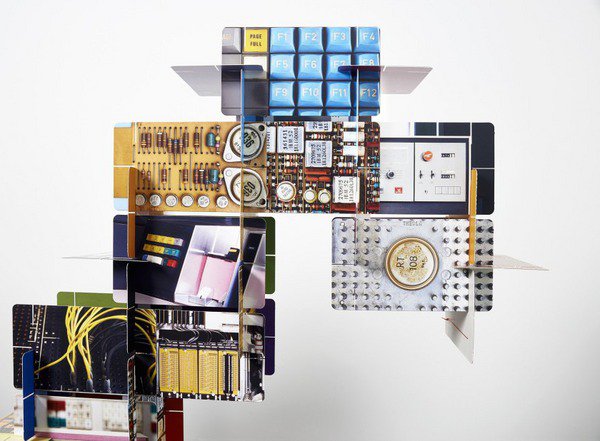 Galeria Luisa Strina is pleased to present Eames-Derivative, (small version), an installation by Venezuelan artist Alessandro Balteo Yazbeck’s. This is the second solo show of the Berlin-based artist in the gallery.

Balteo Yazbeck’s mixed media installations explore the effects of cultural diplomacy and governments’ propaganda strategies. Drawing from a multitude of sources, the artist embarks on a kind of dérive mapped onto a global scale to tease out entangled public secrets and recontextualize them in the contemporary moment.

The ideological apparatus of the state works in mysterious ways. Sometimes it is overt, as when Charles and Ray Eames were commissioned to produce a film Glimpses of the USA for the first US-USSR cultural exchange in 1959. Screened across seven screens in a Buckminster Fuller-designed geodesic dome, the film depicted “a day in the life of the United States.” Automobiles, gleaming urbanity, breathtaking natural vistas, suburbia, and loving families: even as it painted a friendly picture of American humanity, it functioned as a tautological paean to American might. At the end, the floral loops of highway interchanges give way to poignant final bouquets of forget-me-nots. It was a chilling message to the USSR despite the overture of friendship, perhaps working to sweeten the fact that each country had thousands of nuclear missiles pointing at each other.

Later, IBM—the quintessential American company—would commission the Eameses to produce Computer House of Cards for their pavilion at the 1970 World’s Fair in Osaka. It was a continuation of a long-standing IBM-Eames collaboration, which first began in 1957. Here again was the same velvet-gloved diplomacy, this time for the express purpose of promoting a positive image of computers and laying the groundwork for digital technology’s omnipresence. It is referenced in Balteo Yazbeck’s installation Eames-Derivative, produced in collaboration with art historian Media Farzin, which features remakes of these now obsolete slotted cards. They are paired with a chronology of the rise and fall of the monetary gold standard, intertwined with banks’ increasing adoption of computers in global finance and Eames’s collaborations with IBM and the US Department of State. The result is a sculptural house of cards—at once both a testimony to the present-day hegemony of the US military-industrial complex, and a reminder of the fragility of the global financial system that underwrites it.