Where clouds become sculptures and a dog talks philosophy. For the exhibition the artist presents an extended series of drawings and a wall text in which the dynamics described above are investigated. 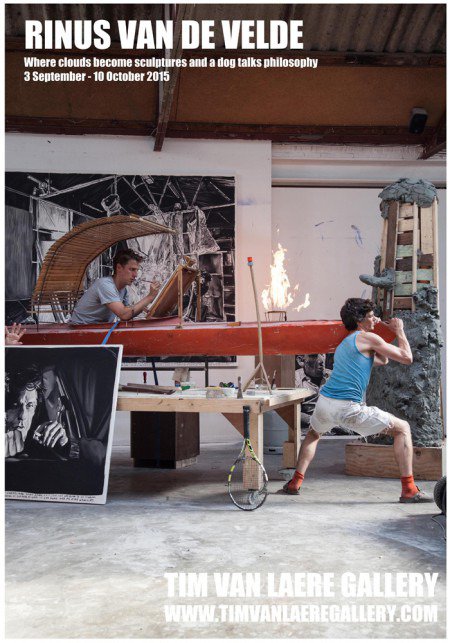 Over the course of the last years, Belgian artist Rinus Van de Velde (b. 1983, Leuven; lives and works in Antwerp) has developed a practice that principally results in monumental, narrative charcoal drawings, but behind which lies a much broader production. Whereas Van de Velde once mainly used found footage as documentation for his drawings, he has gradually taken a firmer control over his images: today, the artist combines, amongst others, found and staged photography, performances without spectators, theatrical sets, cinematic narrative techniques, installations, and sculptures. These elements serve as the basis of drawings that depict a completely different world, yet also document a very real working process that takes place mainly in the studio.

On his drawings and the narrative texts that go along with them, this process crystalizes to a body of work with a recognizable signature and a clear identity. At the same time, text and image function as a starting point for a fictional (artist) biography in which Van de Velde does not correspond to himself, but rather tests the different possibilities of contemporary art. This leads to a productive doubling of his artistic persona: opposed to the "real" artist who chooses to work with well-defined artistic and material parameters in his studio, there is the alter ego who travels across all sorts of (artistic) positions without ever fully identifying with them. Like mirror images without an original, both artists produce each other. A similar tension can be found between the artist's work space and the world-of-the-drawing: on the one hand, the studio is the actual laboratory where the possibilities that lead the artist are tested; on the other, the fictional scenes in the drawings emphasize their roots in studio experimentation.

For his third solo exhibition at Tim Van Laere Gallery, Van de Velde has created an extended series of drawings and a wall text in which the dynamics described above are investigated. The wall text serves to frame the story told in the drawings, which becomes a fiction within a fiction. In the text beneath the drawings, the artist finds himself in the symbolic heart of darkness of an imagination that is reigned by the other. This ever-transforming world is a mythical version of the studio, where Van de Velde and his assistant build different sets by recuperating the same materials time and time again. The wall text reads like a perverted road movie: a woman tells of a long and boring journey by car with the artist, who loses himself in silent brooding or monomaniacal thoughts about his work. Along the way, so-called real landscapes and scenes from the studio are sublimated into imaginary places, where his assistant and other characters play an important part.

Each drawing could be seen as a projection screen showing a one-shot movie full of narrative details. These are often, but not always, interpreted in the texts underneath. Text and image are maximally present: they fill the entire gallery, which becomes a mental space in which the multiplicity of possible fictions is traversed. Myths borrowed from cinema, literature, painting and art in general constantly penetrate the reality of Van de Velde's artistic persona and practice; fantasies, fears and desires materialize to become places that are as emphatically unreal as they are defining. They allow the artist to orient himself towards his idea of a "self" and the other. Text: Koen Sels