Jeux de langage. The works from the Frac collection gathered in the display are all clues that remind us of the importance of language in contemporary art. Drawings, paints, pronounces by: Zin Taylor, Xavier Antin and Erica Baum. 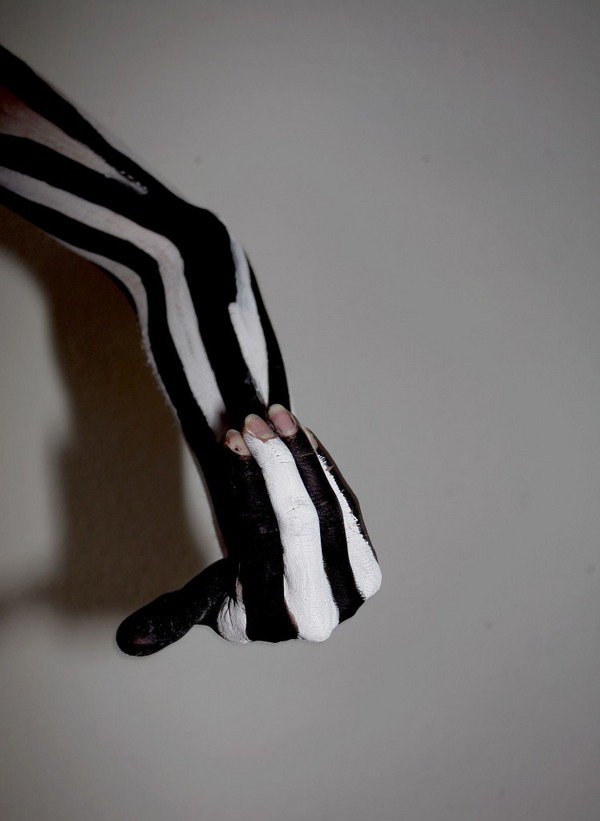 The works from the frac collection gathered in the display are all clues that remind us of the importance of language in contemporary art. By playing on letters, words, their meanings, but also the shapes these words can take, the artists write, draw, paint, print, pronounce… They even go so far as to invent new languages, through works that function as profuse modes of enunciation, of appearance, and of production of signs and images.

Zin Taylor uses his series A structure for language onto an organic form to invent a gestural language. Each image isolates a black-and-white striped arm, frozen in a new pose. Together, they form a sort of enigmatic alphabet, the letters of which are yet to be deciphered. The arm could be seen as the essential link between thought and movement, and therefore the primitive tool to generate language (and art).

The work of Xavier Antin – an artist who comes from the field of graphic arts – focuses on the technical means of production, of which he questions the forms and functions. Untitled (Offshore) is a series of small sculptures that consist in casts of used ink cartridges. This plastic process fossilises a medium that has become obsolete and generates an archaeology of the present, thus questioning today’s overwhelming prevalence of printed images.

Erica Baum uses her camera to hunt down the omnipresence of words and images, and the relationship established between them on printed media (press, books, files…). The Frick series examines certain letterings found on index cards at the library of the Frick Collection, a renowned cultural venue in New York. The expression Nude figures, isolated and oddly quoted between inverted commas, is likely prompt the appearance of mental images, whether they relate or not to the artistic genre of the nude.

This installation constitutes the introduction to Jeux de langage (Word plays), the frac’s new artistic and cultural programme for school and university audiences. This underlying theme will appear in the initiatives organised by the visitors department over the course of the 2015/2016 and 2016/2017 seasons: thematic sessions, art workshops, exhibition of pieces from the collection in schools and universities…