The exhibition brings together approximately 140 sculptures, spanning the years 1902 to 1964, from Picasso's entire career via loans from major public and private collections in the U.S. and abroad, including 50 sculptures from the Musee national Picasso-Paris. 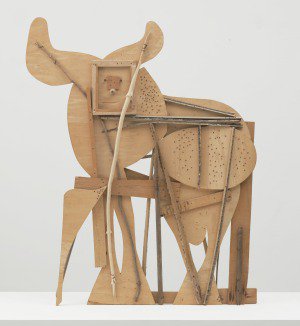 Picasso Sculpture offers a broad survey of Pablo Picasso’s work in three dimensions, spanning the years 1902 to 1964. The largest museum presentation of Picasso’s sculptures to take place in the United States in nearly half a century, the exhibition brings together approximately 140 sculptures from Picasso’s entire career via loans from major public and private collections in the U.S. and abroad, including 50 sculptures from the Musée national Picasso–Paris. With many works on view for the first time in the U.S., it provides an opportunity to explore a rarely seen aspect of Picasso’s long and prolific career. The installation occupies the entirety of MoMA’s fourth floor galleries, allowing sufficient space for the sculptures to be viewed fully in the round. Picasso Sculpture is presented by MoMA in collaboration with the Musée national Picasso–Paris, and is organized by Ann Temkin, The Marie-Josée and Henry Kravis Chief Curator of Painting and Sculpture, and Anne Umland, The Blanchette Hooker Rockefeller Curator of Painting and Sculpture, MoMA; with Virginie Perdrisot, Curator of Sculptures and Ceramics at the Musée national Picasso–Paris.

Pablo Picasso (Spanish, 1881–1973) was trained as a painter but not as a sculptor; from the start, this facilitated a natural disregard for tradition in his sculptural work. Although Picasso’s sculpture is a relatively unfamiliar aspect of his career, it is one that has been profoundly influential throughout the 20th and 21st centuries. It is characterized primarily by the sheer pleasure of invention and experimentation. Over the course of six decades, Picasso redefined the terms of sculpture again and again, setting himself apart not only from what his colleagues were doing but also from what he himself had previously done. Whether portraying humans, animals, or objects, he invested his sculptures with a powerful charisma that belies their inanimate status. Relative to painting, sculpture occupied a deeply personal place in the artist’s work. During his lifetime, Picasso kept most of his sculptures, living among them as if they were family members. After his death, many became part of the founding collection of the Musée national Picasso–Paris.

Picasso’s commitment to sculpture was episodic rather than continuous, and every gallery or pair of galleries in this exhibition represents a distinct chapter of his sculptural career. The passages from gallery to gallery parallel Picasso’s moves from one studio to the next. Each new phase brought with it a new set of tools, materials, and processes, and often a new muse and/or technical collaborator.