Wicked World. New works issuing from different series, all linked by their rootedness in the field of affects and their proliferation, as well as by a good dose of poetically acidic humor. 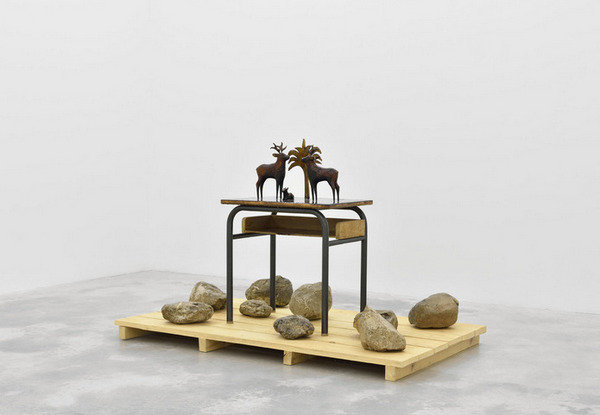 The exhibition Wicked World presents new works issuing from the series "Les Écrans de veille" (Screensavers), "Un Monde pourri" (Wicked World) and "Le Théâtre des opérations" (The Theatre of Operations), all linked by their rootedness in the field of affects and their proliferation, as well as by a good dose of poetically acidic humor. The universes called upon those things, disposing of memories, allowing another memory to emerge: a melancholy at the edge of the intimate and the collective.

"Les Ecrans de veille"
"A palace must be ruined in order that it be interesting."
–La poétique des ruines, Denis Diderot, 1767

The postcard imagery representative of mass tourism—that of large beaches, cultural and museum tourism, or even heavenly islands—is a recurrent motif in the work of Pierre Ardouvin. His tableaux in the "Ecrans de veille" series can be imagined as the perturbed interfaces of a collective imaginary, a dysfunctional synthesis between two sets of logic: that of the mediated dream seen through the screens of mass culture, and of the irruptive and parasitic logic of the intimate.

"Un Monde pourri"
"Can't you see that all my castles are burning?"
–Fire in The Sky, Ozzy Osbourne, 1988

"Un Monde pourri" presents assemblages of plastic objects, mostly toys. These hybridizations, coming to reactivate a childlike language in the dimension of sublimated loss, are produced by heating the objects and melding them together. They are partially melted and deformed. This ensemble offers us an abandoned world, a kind of "B movie" version of the poetics of the ruin. We also find the romantic dimension linked to adolescence and are specific to the artist's universe in the titled that recuperate extracts or titles of songs where Black Sabbath, Nirvana, The Rolling Stones, and the like are found.

Other objects also leap forth in the exhibition: an old school chair, a dead tree trunk, several Christmas ornaments, a worn tire, stones, a small plastic slide, a disco ball... So many elements referring to different universes and whose regrouping constructs figures that reactivate in a frontal and raw way the lost territory of childhood. Each piece of this series, titled "Théâtre des opérations," indeed recuperates the names of military interventions with names as poetic as they are clashing: Odyssee Dawn, Deadlight or Desert Storm. Each puts forward that uncomfortable and paradoxical position that accounts for all of the effective force of Pierre Ardouvin's work: a subtle movement of the pendulum between the dream and the fall, escapism and imprisonment, the poetry of the world and its arid cruelty.


Pierre Ardouvin was born in 1955. He lives and works in Paris. A monographic catalogue Eschatologic Park was published by Les presses du Réel in 2010. A book by Villa Saint Clair Editions will soon be published. A monographic exhibition at the MAC/VAL (Vitry) is currently being prepared for Spring 2016. His work has been shown at the Palais de Tokyo (Paris), the Musée d'Art Moderne de la Ville de Paris, the Fondation Jumex (Mexico), the Mori Art Museum (Tokyo), and the NMCA (Seoul), and is represented in numerous public and private collections in France and overseas.