Monogram. Brian Hubble operates in a fluid world of arrivals and departures. Although he is a relative of Edwin Hubble, the cosmologist and astronomer, who has distanced himself from the sciences and most other objective reasoning. 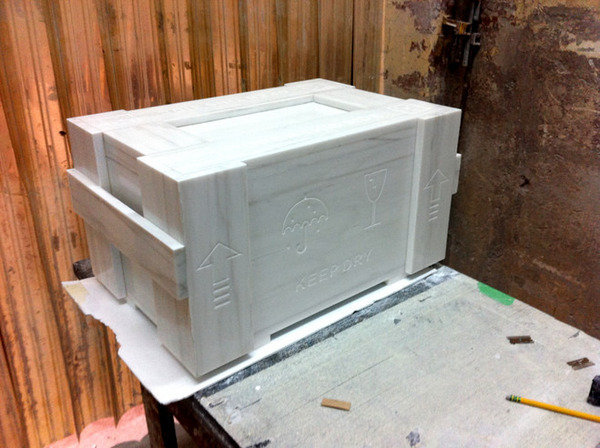 Brian Hubble operates in a fluid world of arrivals and departures. Although he is a relative of Edwin Hubble, the cosmologist and astronomer, Hubble has distanced himself from the sciences and most other objective reasoning. He believes in conspiracies, or maybe, he just wants to drag us into the world of the unknowing and the hysterical. He upsets the tenuous balance of art with signs, symbols, and language. Often his work intersects through the mimetic properties of the materials in the actual artwork and the real life objects. His language is not contingent on art discourse nor is it dependent on the suspension of disbelief. A degree of suspicion and mistrust is integral to engaging with his ideas and motives. We are held hostage — under pressure we inadvertently construct false narratives for his dubious characters.

According to legend, Albert Einstein visited a boarding school in England and wandered by accident into the boys’ locker room. He observed the foul-smelling football garments strewn across the hooks in silence and remarked, “Now I understand: the spirits of the departed pass over into the trousers of the living.”1 Earlier Duchamp proposed the idea of the “infra-mince” — understood as the heat left by someone on a seat, the space between the material and the immaterial, or just the feeling of presence and absence. Einstein’s statement is enchanting because it suggests a world of thoughts, of moving spirits, beyond the immediate phenomenological experience. It creates a dark back alley for us to lurk in.

Hubble and I love the amazing unregulated resources and the convoluted histories of New York — we can walk down the street and employ any number of industries and unique craftsmen into the intrigue of making art. Unlike the internet or the industrial parks of other cities, NY is a medieval economy. We bargain and cajole deals on the street, someone wins and everyone goes home at the end of the day. Hubble has a couple of dollies, and of course his well-worn blue Chevy S10 Pickup, to cart everything away.

Looking at the formal layout of Hubble’s work, I see subterfuge and malfeasance. There is no belabored design but there is a carefully coded arrangement. Dadaism and Collage were early stepping stones into the world of art and language. But what is the equivalent today? Some would argue it is through distorting and refocusing the lenses of film or video but perhaps it is regaining autonomy over the words, the structural and metaphysical foundation that has been cornered by Capital and its dilettante offspring, art education. Hubble’s work is a de-escalation of “absolute art”. Each step is not necessarily the inevitable consequence of the one before. It is a proposition of reevaluating the mechanism of trust between ourselves, and what lies before us.