Acquisitions from 1992 to 1996. The works on view demonstrate a new aesthetic, marked by a generation of artists who distanced themselves from the previous decade. In this period major installations and new media works made their way into the collection. 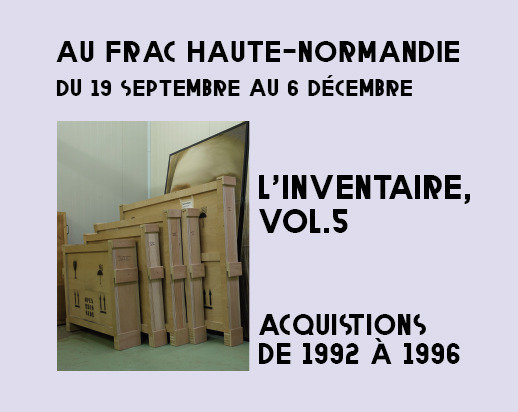 Since September 2011, the Frac Haute-Normandie has been exploring various, distinct ways of displaying a collection that is intrinsically in a constant state of change, and consequently seldom exhibited in its entirety. Exploring, over a period of several years, the works in its collection in accordance with the their inventory number has enabled us to bring them together periodically. This number, which is of little help to the general public, is of the utmost importance as it specifies the order in which each of the works became a part of the collection. The "Inventory" method uses these numbers in chronological order.

The "Inventory" principle therefore invites the spectator to look at the collection, no longer using a theme-based and/or subjective approach, but according to a system whose display methods and rules encourage the works in the collection to be approached from a linear, contextual point of view. The "Inventory" cycle provides an opportunity for the institution to consider both the meaning and the dimension of these holdings today.

Inventory, vol. 5 covers the works acquired between 1992 and 1996, which demonstrate a new aesthetic, marked by a generation of artists who distanced themselves from the previous decade. At the Frac Haute-Normandie, this period also corresponds to Alexandra Midal's directorship and the works commissioned from many artists, such as Franck Scurti, Stephen Willats, Ken Lum and Stephan Balkenhol, who broke with the acquisition policies of the 80s.
At the same time, major installations made their way into the collection, including Trèfles by Delphine Coindet and Camera Obscura Mobile by Rodney Graham.
This period also marks the acquisition of new media works: La Tâche Aveugle by James Coleman and Allen Street by Beat Streuli shown exceptionally in the Main Galleries of the ESADHaR, in the Saint-Maclou Atrium, in Rouen.