"The Arrival of Spring" comprising 12 large-format inkjet prints from drawings that Hockney created on his iPad, Woldgate is a set of 25 charcoal drawings on paper, presented in 5 groups of 5 views. Hefti presents a forest of tubular structures made of steel, copper, titanium and aluminium, militates against the popular belief that metals are inert materials. 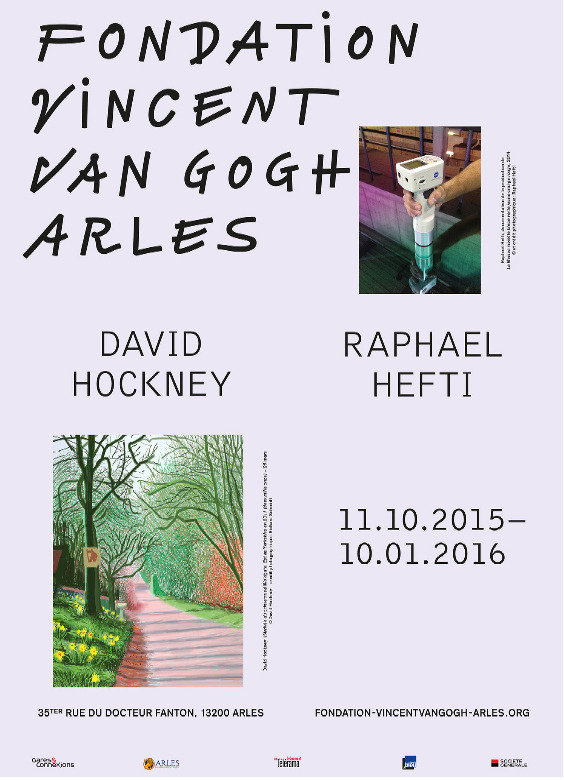 David Hockney
The Arrival of Spring

David Hockney was born in 1937 in Bradford, England, and he lives and works in Los Angeles. Although closely associated with the emergence of Pop Art in the 1960s, he nevertheless rejects art- historical labels and pursues a wide-ranging artistic practice based on multiplicity and innovation. He is one of the leading and most enduringly popular figures in contemporary art.

For a long time David Hockney divided his time between the US and Great Britain, and more specifically between Los Angeles, where he has lived most recently since 2013, and his native Yorkshire, whose wooded countryside provides the motifs of the two series on show at the Fondation Vincent van Gogh Arles: The Arrival of Spring in Woldgate, East Yorkshire in 2011 (twenty eleven), comprising 12 large-format inkjet prints from drawings that Hockney created on his iPad, and Woldgate, The Arrival of Spring in 2013 (twenty thirteen), a set of 25 charcoal drawings on paper, presented here in five groups of five views.
These two series testify to the artist’s unflagging curiosity for new picture-making techniques and technologies, and about how he can use them to renew the language of art. Since first moving to Los Angeles in 1963, he has worked in widely differing genres. The oil paintings, and subsequently acrylics, that established his early fame were followed by stage designs for the opera (as from 1975), his highly-regarded photo collages in the 1980s, which were created on the basis of Polaroid instant snapshots, and since 2009 his drawings made with art apps on the iPhone and the iPad.

Both the iPad and the charcoal series of drawings were produced outdoors in the East Yorkshire countryside, which the artist observed attentively as winter gave way to spring. Working with the touch-screen tablet, which Hockney uses as a digital sketchpad, allows the artist to explore a new visual language while at the same time affirming his love for colours, here taken to their most luminous heights: “I don’t know how I see colour, but I see it, and I like it. I suppose I exaggerate it a bit (1)”. The charcoal drawings simultaneously invoke Hockney’s fascination for Chinese scrolls, which inspire in him the idea that black and white contain colours, as well as with the compositional changes in the Woldgate landscape over time – an exercise in patience to which he had to subscribe to in order to paint the same view on five different occasions.

The exhibition David Hockney: “The Arrival of Spring” is complemented by other works by the artist, including Vincent, Chair and Pipe of 1988. This painting, with its vibrant colours and inverted perspectives, testifies to Hockney’s admiration for Vincent van Gogh, who, a century earlier, was already using non-imitative colours to transmit his vision of reality.

1) David Hockney in an interview with Martin Bailey, 22 May 2015, published in our exhibition catalogue David Hockney: The Arrival of Spring.

David Hockney, OM CH RA, was born on 9 July 1937 in Bradford, England. He attended Bradford Grammar School, the Bradford School of Art, graduating in 1957, and the Royal College of Art, London, receiving the Gold Medal in 1962. With a career spanning more than 50 years, Hockney has received numerous honours and awards, including the Order of the Companion of Honour from Her Majesty the Queen in June 1997, and the Order of Merit in 2012, as well as honorary degrees from the University of Oxford in 1995, Yale University in 2005 and the University of Cambridge in 2007. His 2001 publication Secret Knowledge: Rediscovering the lost techniques of the Old Masters received critical acclaim and has been published in more than a dozen languages. Painter, draughtsman, printmaker, stage designer and photographer, he is considered one of the most influential British artists of the 20th century.

The practice of the young Swiss artist Raphael Hefti (b. 1978) has its point of departure in the search for the still unrecognized potential of materials and industrial processes; the – amplified and aesthetic – imperfection of a sheet of metal or pane of glass marks its point of arrival.

The artist intervenes not simply in technical processes, but equally in the manufacturing protocols of companies making industrial materials, whose production facilities become the laboratory for his observations. Just as his studios in Zurich and London operate in concert, so Raphael Hefti articulates his thinking and pursues his interventions via a collaborative system. After in-depth discussions with the technicians and engineers concerned, Hefti persuades these latter to push a technical procedure to the liminal point at which a transformation takes place at the heart of the material or upon its surface.

Among the discoveries that the artist is exhibiting on the second floor of the Fondation Vincent van Gogh Arles, the installation Various threaded poles of determinate length potentially altering their determinacy (2015) – a forest of tubular structures made of steel, copper, titanium and aluminium, 35 mm in diameter – militates against the popular belief that metals are inert materials. Heated electrically to various extremely high temperatures at different points along their length, the surfaces of the metal poles change colour and assume a range of iridescent hues. In a transformation of a different sort, anti-reflective museum glass has given birth to the panes of dichroic glass composing The Violet Blue Green Yellow Orange Red House (2014), the installation crowning the Fondation’s glazed extension.

Given that the results of Hefti’s artistic experimentation are partly beyond control, it is all the more extraordinary to discover the aesthetic qualities and potent effects of these works, which might be said to play with the architectural constraints of the Fondation building. While the metallic poles of variable lengths, positioned between floor and ceiling, infuse the space with tension, the photogram Lycopodium (2015) – obtained via the combustion of flammable spores on the photosensitive surface of the photographic paper – inserts itself harmoniously into the oblong gallery space for which it has been specially created.

Raphael Hefti rejects the medium specificity of photography and sculpture by placing an emphasis on the process of production. His artistic practice is informed by a deep curiosity to reveal the inner mechanism and structure of an object: industrial and organic. In conversation with specialists, factory employees and scientists, he investigates the fragility of material by interfering with its original composition. This investigation results in large-scale, multimedia installations and performances. Born 1978 in Biel-Bienne, Switzerland, Raphael Hefti is an artist based in London and Zurich. He received his MFA from the Slade School of Fine Art in 2011. He co-directs the London project space Library+.