This exhibition is the first to focus on his portraiture and includes over 60 paintings, sculptures and drawings from the entire range of his career, from international public and private collections. The show also features a room of photographs documenting the artist's life. 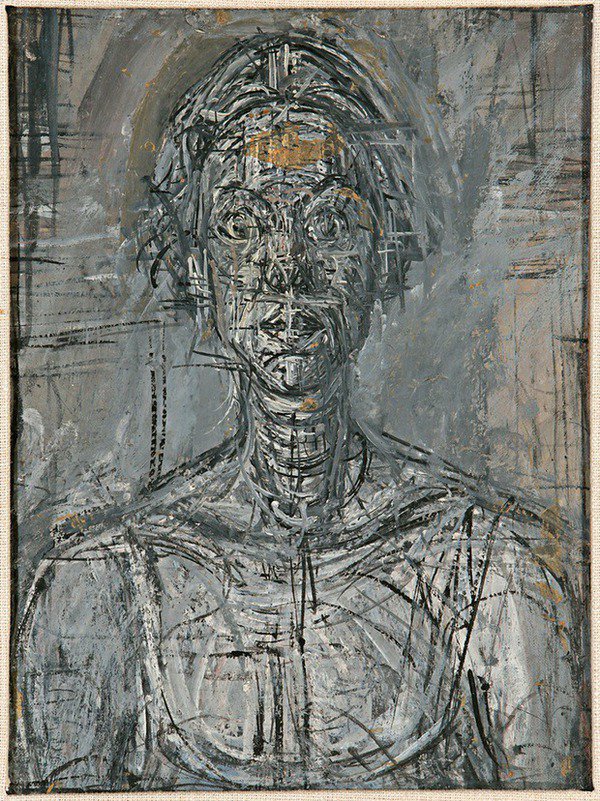 The first ever exhibition solely to consist of portraits by Alberto Giacometti is to open at the National Portrait Gallery this autumn, it was announced today, hours after a sculpture of the Swiss artist sold for millions of dollars at an auction in New York, making him the world’s most highly prized modern sculptor.

To mark the fiftieth anniversary of the artist’s death, Giacometti: Pure Presence (15 October 2015-10 January 2016) will comprise over 60 works, including paintings, sculptures and drawings, from the entire range of his career.

Including very rare loans from private collections and seldom-seen portraits, the exhibition will be the first to focus on the lesser-known double life of the Swiss twentieth century artist.

Most famous for his tall, thin, standing or walking figures, Alberto Giacometti (1901-66) is widely known as a leading modernist and surrealist sculptor working alongside Picasso, Miró and Ernst in Paris in the 1920s. Acknowledging the experimental and imaginative nature of his work, Giacometti claimed that, starting in 1925, for ten years ‘it was necessary to abandon the real.’

But the Gallery’s exhibition emphasises the portraits produced by the sculptor during this time as he steered a lesser-known, parallel artistic course at his family home in Switzerland. Beyond that, and covering the period 1914 to 1966, the exhibition reveals Giacometti’s life-long preoccupation with portraiture and ’copying appearance.’

Giacometti: Pure Presence will focus on the intensity of his relationships with frequent sitters such as members of his close family; Isabel Nichol (who later became Francis Bacon’s muse Isabel Rawsthorne); and the prostitute Caroline, whom he met in 1960 and who sat for his portraits over the following five years.

Tracing Giacometti’s engagement with representing the figure, Giacometti: Pure Presence will display portraits of all his main models, including his wife Annette and his brother Diego, as well as such friends as the writers Louis Aragon and Jean Genet, the retailer and philanthropist Lord Sainsbury and the art writer James Lord. The exhibition will also feature a room of photographs documenting the artist’s life.

Highlights include his earliest portrait bust of his brother Diego created in 1914 when he was just 13 and his last bronze busts from 1965. These are displayed alongside an astonishing range of paintings and drawings which show Giacometti’s development from post-impressionist influences via cubism to expressionist portraits of figures in highly charged spaces, reminiscent of the ‘caged’ compositions of Francis Bacon.

Major sculptures on show range from a serene head of Isabel inspired by classical Egyptian portraiture to portraits of Diego and Annette: gnawed, dissolving heads and figures that became Giacometti’s trademarks. Such sculptures are frequently pared down to very small forms as though the viewer is observing the sitter from a long distance.

One of the artist’s most celebrated tall hieratic figures Woman of Venice VIII, stands at the centre of the exhibition, making a vital contact between Giacometti’s portraits and his famous sculptures evoking an anonymous human presence.

Giacometti: Pure Presence will be the first large-scale Giacometti exhibition to be held in the United Kingdom since those at the Tate in 1965 and at the Royal Academy in 1996, and will be the first to focus exclusively on Giacometti’s engagement with the human figure and the creation of images of an individual human presence based on particular models. The title of the exhibition derives from the existentialist writer Jean-Paul Sartre, who referred to Giacometti’s endeavour to give ‘sensible expression’ to ‘pure presence.’

Paul Moorhouse, Curator of Giacometti: Pure Presence, says: ‘Giacometti is widely celebrated as one of the giants of modern art, but his almost continuous involvement with portraiture is less well known. In devoting individual rooms to his main models, the exhibition exposes the singular, obsessive and intense nature of Giacometti’s portraits. Repetition, variation, accretion and dissolution are revealed as vital elements in his extraordinary vision.’

Andrea Sullivan, Head of Corporate Social Responsibility, EMEA, Bank of America Merrill Lynch, says: ‘At Bank of America Merrill Lynch we believe that maintaining a vibrant arts sector is crucial to ensuring strong communities and economies; and our global and diverse programme of cultural support has been developed with this in mind. We have a long-standing relationship with the National Portrait Gallery having supported recent exhibitions including Irving Penn Portraits and Lucian Freud Portraits. We are therefore very proud to continue our partnership through this beautiful retrospective of Giacometti’s work.’

Giacometti: Pure Presence is curated by Paul Moorhouse, the National Portrait Gallery’s Curator of Twentieth Century Portraits. His previous exhibitions at the Gallery include The Great War in Portraits (2014), The Queen: Art and Image (2012) Gerhard Richter Portraits (2009), and Pop Art Portraits (2007).

Alberto Giacometti
Since his death in 1966, Alberto Giacometti has become recognized internationally as one of the most important and distinctive artists of the twentieth century. Belonging to no particular school or tendency, during the late 1920s and early 1930s his work developed through post-cubist and surrealist phases. It later attained a mature, individual idiom whose preoccupation with the depiction of a human presence in an enveloping space may be seen in relation to contemporary existentialist concerns with defining the place and purpose of man in a godless universe. Spanning painting, sculpture, drawing and printmaking, Giacometti’s oeuvre ranges from idiosyncratic surrealist objects to intensely observed images of the human figure. At the centre of this activity, Giacometti’s portraits of particular individuals have a resonance which the exhibition explores in detail.

Precociously gifted, Giacometti’s earliest drawings, paintings and sculptures took members of his family and his own image as subjects. These early works demonstrate Giacometti’s awareness of post-impressionist and divisionist styles. After moving to Paris in 1922, until the late 1930s sculpture was a principal preoccupation. During this period, self-portraits and also portraits of his mother and father, his sister Ottilia, and artist friends such as Isabel Nichol were main subjects, sustaining a progressive abstraction. From 1946 Giacometti resumed painting, and images that depict an individual human presence became central to his work. After 1954, when he began making sculpture from life, increasingly his portraits evolved as the outcome of an ongoing dialogue between painting and sculpture, characterized by a progressive engagement with a limited number of sitters.

Giacometti subjected the human image to a radical process of interrogation and transformation in which the exploration and representation of flesh, presence, distance and space are vital, interacting elements. The individuals he depicted include his mother; Diego his brother; his wife Annette; Jean Genet the playwright; Caroline, a prostitute; and, finally, Yanaihara and Lotar, both of whom were friends of the artist. In these compelling images, a human presence seems poised between being and non-being, providing the basis for Giacometti’s reputation as one of the most innovative artists of the last century.

For more information about the artist please go to: www.fondation-giacometti.fr

The exhibition will be accompanied by a fully illustrated book by curator Paul Moorhouse and will be available to purchase from the National Portrait Gallery shops priced £29.95.