Anti-Scans. By using scientific, commercial, and military technologies to create his work, Lefcourt draws painting into the broader conflicts and politics of representation. To create his new series of paintings, Lefcourt has used 3-D scanning techniques. 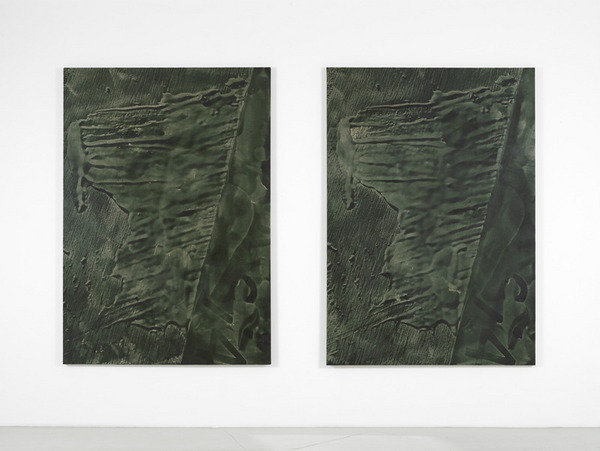 Campoli Presti is pleased to present Anti-Scans, Daniel Lefcourt's sixth exhibition with the gallery. Throughout his career, Lefcourt has continually engaged the space between painting and technical imaging. By using scientific, commercial, and military technologies to create his work, Lefcourt draws painting into the broader conflicts and politics of representation.

To create his new series of paintings, Lefcourt has used 3-D scanning techniques (photogrammetry, laser) originally developed for the fields of archeology, forensics and cartography. While the scientific fields that use these methods are concerned most of all with accuracy, Lefcourt uses 3D scanning as the basis for a material play with the languages of painting.

The works featured in Anti-Scans present surfaces and supports such as canvas and wood, as well as painting media and pigment. The reflections and movement of the paint while it is still in motion creates unpredictable distortions in the scanned model – what was a smooth reflective surface might translate as a crystalline structure, or simply an empty gap – while the detailed surfaces on which the paint sits, create a legible, if artificial, ground. Anti-Scans are precise recordings of the material world, but they are also a kind of digital hallucination. The scans are simultaneously highly detailed, yet filled with errors and glitches. These temporary aberrations have been captured, enlarged, and ‘stored’ as paint on canvas. Counter-intuitively, it is the errors in the scans – and the subtle variation in each painting – that serve to register the material basis of digital input and output.
Alongside the paintings are two new pairs of drawings that conflate various historical methods of image production. Over the course of the past year Lefcourt has created a large set of rubber stamps using a laser engraver – all the imagery relating to the paintings, and to the production of technical images in general. For Lefcourt, this collection of stamps is a kind of historical database – each image stored in rubber hardware. This database can be queried, returning the results by hand-printing each stamp individually, in varying tones and sequences.

While the works at first appear to be descriptive and ‘readable’, this apparent legibility is continually frustrated and postponed. Instead we are left with a rigorously abstract set of artworks. Ultimately, the Query drawings are a rebus, structured by rhythm and sequence.

Daniel Lefcourt lives and works in New York. His work forms part of the collection of the Whitney Museum of American Art, New York and MOCA - Museum of Contemporary Art, Los Angeles. Lefcourt’s work has been featured in numerous exhibitions including MoMA P.S.1; the Sculpture Center, Long Island City; ICA Philadelphia; de Young Museum, San Francisco; Malmö Konstmuseum and Kunst-Werke Berlin. In 2013 the Dia Art Foundation commissioned a web project by the artist. He received his MFA from Columbia University and is a member of the faculty of Rhode Island School of Design.